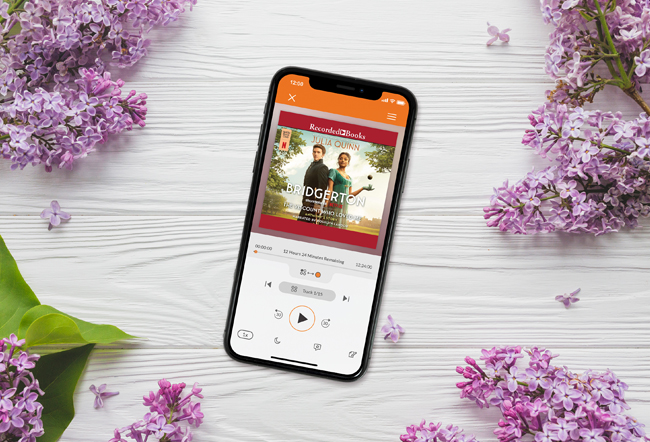 If you got swept up in the recent phenomenon of the Bridgerton series on Netflix, don’t worry, we’re right there with you. (I’m still humming the Vitamin String Quartet version of “Bad Guy” right this second!)

But what now!? If you binge-watched the entire series on Netflix and are itching for more regency era scandal, we’ve got the answer! Hop into the full Bridgerton audiobook series to get all the details on your Bridgerton family faves and, of course, Lady Whistledown.

We’ve got all of the audiobooks listed in order so you won’t miss a single beat.

The Duke and I by Julia Quinn, narrated by Rosalyn Landor

Simon Basset, the irresistible Duke of Hastings, has hatched a plan to keep himself free from the town’s marriage-minded society mothers. He pretends to be engaged to the lovely Daphne Bridgerton. After all, it isn’t as if the brooding rogue has any real plans to marry—though there is something about the alluring Miss Bridgerton that sets Simon’s heart beating a bit faster.

And as for Daphne, surely the clever debutante will attract some very worthy suitors now that it seems a duke has declared her desirable. But as Daphne waltzes across ballroom after ballroom with Simon, she soon forgets that their courtship is a complete sham. And now she has to do the impossible and keep herself from losing her heart and soul completely to the handsome hell-raiser who has sworn off marriage forever!

The Viscount Who Loved Me by Julia Quinn, narrated by Rosalyn Landor

1814 promises to be another eventful season, but not, This Author believes, for Anthony Bridgerton, London’s most elusive bachelor, who has shown no indication that he plans to marry.

And in all truth, why should he? When it comes to playing the consummate rake, nobody does it better…

Contrary to popular belief, Kate is quite sure that reformed rakes do not make the best husbands—and Anthony Bridgerton is the most wicked rogue of them all. Kate is determined to protect her sister-but she fears her own heart is vulnerable. And when Anthony’s lips touch hers, she’s suddenly afraid she might not be able to resist the reprehensible rake herself.

An Offer from a Gentleman by Julia Quinn, narrated by Rosalyn Landor

Sophie Beckett never dreamed she’d be able to sneak into Lady Bridgerton’s famed masquerade ball—or that ‘Prince Charming’ would be waiting there for her! Though the daughter of an earl, Sophie has been relegated to the role of servant by her disdainful stepmother. But now, spinning in the strong arms of the debonair and devastatingly handsome Benedict Bridgerton, she feels like royalty. Alas, she knows all enchantments must end when the clock strikes midnight.

Who was that extraordinary woman? Ever since that magical night, a radiant vision in silver has blinded Benedict to the attractions of any other—except, perhaps, this alluring and oddly familiar beauty dressed in housemaid’s garb whom he feels compelled to rescue from a most disagreeable situation. He has sworn to find and wed his mystery miss, but this breathtaking maid makes him weak with wanting her. Yet, if he offers her his heart, will Benedict sacrifice his only chance for a fairy tale love?

Everyone knows that Colin Bridgerton is the most charming man in London. Penelope Featherington has secretly adored her best friend’s brother for . . . well, it feels like forever. After half a lifetime of watching Colin Bridgerton from afar, she thinks she knows everything about him, until she stumbles across his deepest secret . . . and fears she doesn’t know him at all.

Colin Bridgerton is tired of being thought nothing but an empty-headed charmer, tired of everyone’s preoccupation with the notorious gossip columnist Lady Whistledown, who can’t seem to publish an edition without mentioning him in the first paragraph. But when Colin returns to London from a trip abroad he discovers nothing in his life is quite the same—especially Penelope Featherington! The girl haunting his dreams. But when he discovers that Penelope has secrets of her own, this elusive bachelor must decide . . . is she his biggest threat—or his promise of a happy ending?

To Sir Phillip, with Love by Julia Quinn, narrated by Rosalyn Landor

Sir Phillip knew that Eloise Bridgerton was a spinster, and so he’d proposed, figuring that she’d be homely and unassuming, and more than a little desperate for an offer of marriage. Except . . . she wasn’t. The beautiful woman on his doorstep was anything but quiet, and when she stopped talking long enough to close her mouth, all he wanted to do was kiss her . . . and more.

Did he think she was mad? Eloise Bridgerton couldn’t marry a man she had never met! But then she started thinking . . . and wondering . . . and before she knew it, she was in a hired carriage in the middle of the night, on her way to meet the man she hoped might be her perfect match. Except . . . he wasn’t. Her perfect husband wouldn’t be so moody and ill-mannered, and while Phillip was certainly handsome, he was a large brute of a man, rough and rugged, and totally unlike the London gentlemen vying for her hand. But when he smiled . . . and when he kissed her . . . the rest of the world simply fell away, and she couldn’t help but wonder . . . could this imperfect man be perfect for her?

When He Was Wicked by Julia Quinn, narrated by Rosalyn Landor

In every life there is a turning point. A moment so tremendous, so sharp and breathtaking, that one knows one’s life will never be the same. For Michael Stirling, London’s most infamous rake, that moment came the first time he laid eyes on Francesca Bridgerton.

After a lifetime of chasing women, of smiling slyly as they chased him, of allowing himself to be caught but never permitting his heart to become engaged, he took one look at Francesca Bridgerton and fell so fast and hard into love it was a wonder he managed to remain standing. Unfortunately for Michael, however, Francesca’s surname was to remain Bridgerton for only a mere thirty-six hours longer—the occasion of their meeting was, lamentably, a supper celebrating her imminent wedding to his cousin.

But that was then . . . Now Michael is the earl and Francesca is free, but still she thinks of him as nothing other than her dear friend and confidant. Michael dares not speak to her of his love . . . until one dangerous night, when she steps innocently into his arms and passion proves stronger than even the most wicked of secrets .

It’s in His Kiss by Julia Quinn, narrated by Rosalyn Landor

Gareth St. Clair is in a bind. His father, who detests him, is determined to beggar the St. Clair estates and ruin his inheritance. Gareth’s sole bequest is an old family diary, which may or may not contain the secrets of his past . . . and the key to his future. The problem is—it’s written in Italian, of which Gareth speaks not a word.

All the ton agreed: there was no one quite like Hyacinth Bridgerton. She’s fiendishly smart, devilishly in small doses. But there’s something about her—something charming and vexing-that grabs him and won’t quite let go . . .

Or don’t. But rest assured, he’s spinning in his grave when Gareth and Hyacinth cross paths at the annual—and annually discordant—Smythe-Smith musicale. To Hyacinth, Gareth’s every word seems a dare, and she offers to translate his diary, even though her Italian is slightly less than perfect. But as they delve into the mysterious text, they discover that the answers they seek lie not in the diary, but in each other . . . and that there is nothing as simple—or as complicated—as a single, perfect kiss.

On the Way to the Wedding by Julia Quinn, narrated by Rosalyn Landor

Bestselling author Julia Quinn’s popular and critically acclaimed Bridgerton novels have won a loyal following. This tale closes the Regency-era saga with the story of Gregory, the last unmarried Bridgerton.

Gregory has been patiently waiting for his turn at love, and when he sees beautiful Hermione Watson, he is sure he has found his soul mate. But then her friend Lucy, who is happily engaged herself, informs Gregory that Hermione’s heart belongs to another. Lucy attempts to bring Hermione and Gregory together in wedded bliss—but in the process, she falls for him. Yet Lucy simply cannot break off her own engagement—and Gregory must decide what to do on the way to her wedding.