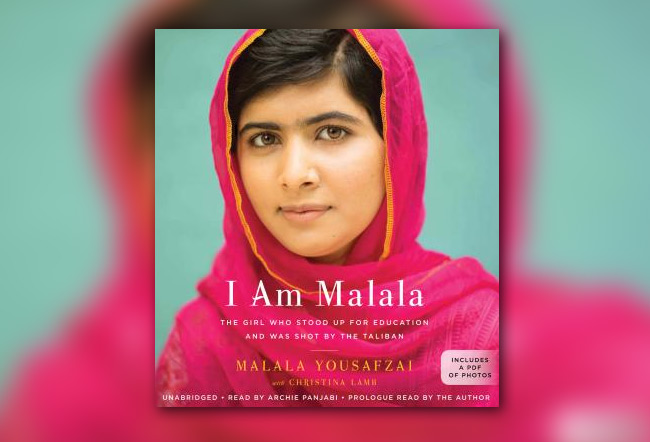 ‘I Am Malala: The Girl Who Stood Up for Education and Was Shot by the Taliban’

By Malala Yousafzai with Christina Lamb

Listen to an excerpt:

On October 9, 2012 at the age of 15, Malala Yousafzai was shot in the head by a Taliban gunman as she rode the bus home from school. Her crime in the eyes of the Taliban? Speaking out for the rights of young women like herself to receive an education. Malala’s shooting shocked the world. Now, less than one year later, this incredible young woman has published an inspiring account of her life, her family, her near-fatal brain injury and her struggle to recover and overcome.

‘I Am Malala’ is at once heartbreaking and uplifting. It’s the story of a girl who has fought for her entire young life to improve conditions for girls in her homeland but who now cannot return to the land that she loves. It’s the story of a father who tried to make a better future for his daughter and now blames himself for the injury that nearly took her life. And it’s the story of a land at odds with itself, torn apart by Taliban militants aiming to impose their rule upon peace-loving Muslims who simply want to live their lives in this rugged yet beautiful corner of the East.

From the very start of ‘I Am Malala’, Malala paints a picture of life in the part of Pakistan where she grew up as a paradise. Although it may not have many of the luxuries that we in the West take so much for granted, when Malala describes the Swat Valley near the Pakistan-Afghanistan border you get a picture of lush plains set among mountains in an area once inhabited by some of the first Buddhists, and boasting historic Buddha statues that date back thousands of years.

In addition to the beautiful surroundings in which she grew up, Malala was blessed in a much more profound way. In a land that values sons over daughters, Malala was fortunate to have two parents who didn’t measure her worth based on her gender. From the day she was born, Malala’s father, a teacher dedicated to educating the youth in his district, treasured his daughter and raised her to think for herself. With the support of her father, Malala developed a thirst for knowledge and was driven to succeed, always placing first or second in her class.

Malala also covers the difficult history of the region. The tragic events of 9/11 shocked Malala’s community as it did the rest of the world, but it was not long before the conspiracy theories began to circulate – that it was an act of the U.S. government, or a plot by ‘the Jews’. As the tensions in neighboring Afghanistan escalated, the Swat Valley soon felt the effects. The power of Maulana Fazlulla, the local Taliban leader, began to grow and it was announced in 2009 that girls could no longer attend school.

“If one man can change everything, why can’t one girl change it?”

The book is narrated by Archie Panjabi, best known for her role in ‘Bend It Like Beckham’ (a film that gets a mention in the book.) Panjabi delivers the highs and lows of Malala’s young life with the perfect combination of hope and gravity. Recounting the harrowing details of Malala’s attack, Panjabi’s straightforward manner is without melodrama, capturing the severity of the situation yet reassuring the listener with her level tones. Malala herself reads the prologue, an uplifting introduction, demonstrating just how far this courageous girl has come in 12 short months.

‘I Am Malala’ is an incredible book from a teenage author, but considering that Malala has been a media figure since the age of 11, when she began writing an anonymous blog for the BBC detailing life for a young girl under the Taliban, it is hardly surprising that she is such an insightful, inspirational writer. I will admit – I began listening to this book with some apprehension about the subject matter. I was afraid that I would leave this story feeling depressed and hopeless. My expectations couldn’t have been further from the truth. I walked away from this book feeling inspired by the triumphant story of this girl and her father who defied the Taliban and lived to tell the tale, spreading her message of hope across the world. The ultimate tragedy you take away is that Malala and her family are now forced to live away from the land that they love and have worked so hard for. But Malala swears that she will return to Pakistan one day – and after reading her book you believe that there is nothing this young woman can’t accomplish.