The audiobook I listened to this month was Infinite Jest by David Foster Wallace. With this book clocking in at 55 hours, endurance was the name of the game and boy do I need to work on my longevity. 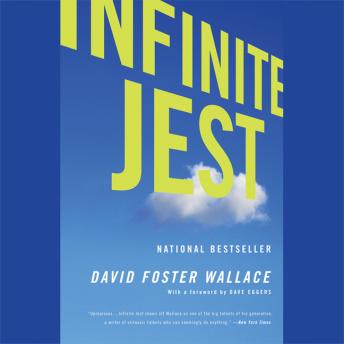 At first, I really enjoyed the story. It is, in my opinion, a satirical comedy that pokes fun at many current trends while bringing light and perspective to many every-day issues.  Despite being written in 1996, the book’s concepts and seemingly psycho-analytical portrayal of people and the world seemed to hold true to this very day.

Without question, it’s a great story; there are many different characters to follow, each very interesting, as well as plenty of foreshadowing which constantly leaves you wanting to know how everything is interconnected. The narrator does a great job at portraying all of the different voices which helped me keep the characters from getting mixed up, a fate some audiobooks fall victim to. A slight qualm about having so many different story lines: if you lost focus for a little bit, you could “wake up” in the middle of an entirely different characters life and be forced to back track (which is much more clumsy in an audiobook than in print).  Another thing the audiobook does suffer from is the lack of supporting documents.  This title has upwards of 300 end notes which are constantly referred to throughout the audio book. Without an easy way to flip to the end and read the reference, I feel as though some of the significance to the story may have been lost.

I must admit, I did read the Wiki about the book about 3 hours in to get a better handle of what was going on. This helped to piece things together for me as I was listening. I would definitely suggest getting the end notes prior to listening, as they’ll go a long way to enriching the IJ experience.

I would most definitely give this title another shot and recommend it to anyone who has a somewhat dark sense of humour and has a little inner conspiracy theorist. Let me know what you think!