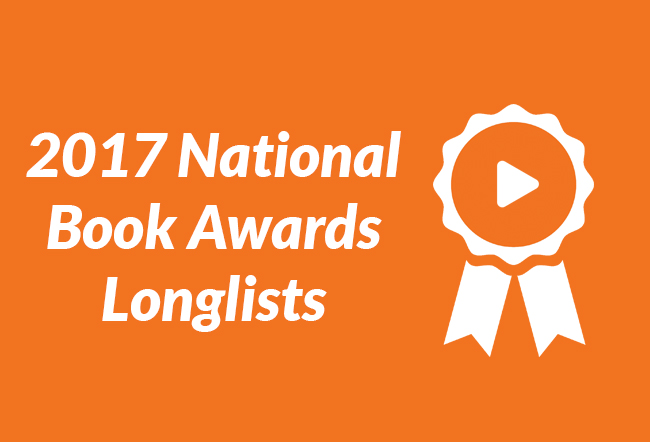 It’s important to note that some of this year’s books have not been published yet (remember that November deadline), and some that have are just not available in audiobook format (thumbs down to that). But many of the titles are indeed available from Audiobooks.com, and are all now on my to-listen list.

THE LONGLIST FOR FICTION INCLUDES: For Pop and Mam, their daughter Leonie, and her kids Jojo and Kayla, life is hard: Mam has cancer, Pop is preoccupied by working their small parcel of land, Leonie has a meth problem, and Jojo and Kayla seek love from their grandparents rather than their absent mother. Their lives are further complicated when Leonie gets the call from the white father of her children that he’s up for parole.

2. A Kind of Freedom: A Novel by Margaret Wilkerson Sexton, narrated by Bahni Turpin, Adenrele Ojo and Kevin Kenerly In 1982, Evelyn’s daughter Jackie is a frazzled single mother grappling with her absent husband’s drug addiction. Just as she comes to terms with his abandoning the family, he returns, ready to resume their old life. Jackie must decide if the promise of her husband is worth the near certainty that he will leave again. Profoundly moving and gracefully told, PACHINKO follows one Korean family through the generations, beginning in early 1900s Korea with Sunja, the prized daughter of a poor yet proud family, whose unplanned pregnancy threatens to shame them. Betrayed by her wealthy lover, Sunja finds unexpected salvation when a young tubercular minister offers to marry her and bring her to Japan to start a new life.

4. Miss Burma by Charmaine Craig, narrated by the author After attending school in Calcutta, Benny settles in Rangoon, then part of the British Empire, and falls in love with Khin, a woman who is part of a long-persecutedethnic minority group, the Karen. World War II comes to Southeast Asia, and Benny and Khin must go into hiding in the eastern part of the country during the Japanese Occupation, beginning a journey that will lead them to change the country’s history.

THE LONGLIST FOR NON-FICTION INCLUDES: As [George Washington] grew accustomed to Northern ways, there was one change he couldn’t get his arms around: Pennsylvania law required enslaved people be set free after six months of residency in the state. Rather than comply, Washington decided to circumvent the law. Every six months he sent the slaves back down south just as the clock was about to expire.

2. Killers of the Flower Moon: The Osage Murders and Birth of the FBI by David Grann, narrated by Will Patton, Ann Marie Lee, Danny Campbell In this last remnant of the Wild West where oilmen like J. P. Getty made their fortunes and where desperadoes like Al Spencer, the ‘Phantom Terror,’ roamed many of those who dared to investigate the killings were themselves murdered. As the death toll climbed to more than twenty-four, the FBI took up the case. It was one of the organization ‘s first major homicide investigations…

3. No Is Not Enough: Resisting Trump’s Shock Politics and Winning the World We Need by Naomi Klein, narrated by Brit Marling “This book is a toolkit to help understand how we arrived at this surreal political moment, how to keep it from getting a lot worse, and how, if we keep our heads, we can flip the script and seize the opportunity to make things a whole lot better in a time of urgent need. A toolkit for shock-resistance.”-Naomi Klein, from the Preface

4. Democracy in Chains: The Deep History of the Radical Right’s Stealth Plan for America by Nancy MacLean, narrated by Bernadette Dunne Behind today’s headlines of billionaires taking over our government is a secretive political establishment with long, deep, and troubling roots. The capitalist radical right has been working not simply to change who rules, but to fundamentally alter the rules of democratic governance. But billionaires did not launch this movement; a white intellectual in the embattled Jim Crow South did. Democracy in Chains names its true architect-the Nobel Prize-winning political economist James McGill Buchanan-and dissects the operation he and his colleagues designed over six decades to alter every branch of government to disempower the majority.