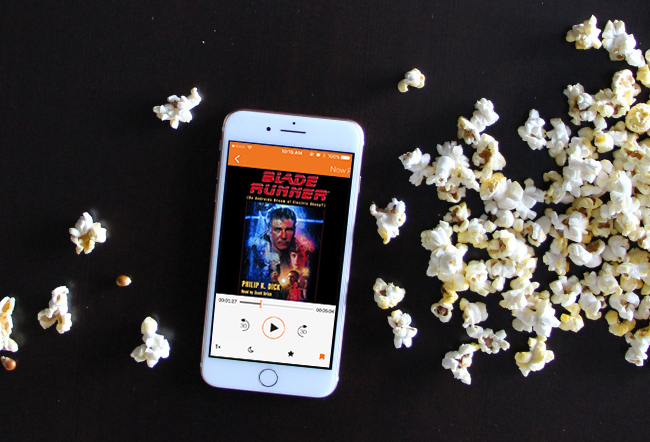 The month of October will see its fair share of shows and movies adapted from popular books. Check out what’s upcoming and take a listen before they hit the screen! Although Blade Runner 2049 isn’t a direct book-to-film adaptation, it’s a sequel to the 1982 film based on the novel Blade Runner, by Philip K. Dick. Check out the original book about Rick Deckard’s mission to track down and kill rogue androids. Trouble was, the androids all looked exactly like humans, and they didn’t want to be found… Read more and listen to a sample

The Mountain Between Us
Expected Release: October 6th

On a stormy winter night, two strangers wait for a flight at the Salt Lake City airport. Ashley Knox is an attractive, successful writer, who is flying East for her much anticipated wedding. Dr. Ben Payne has just wrapped up a medical conference and is also eager to get back East for a slate of surgeries he has scheduled for the following day. When the last outgoing flight is cancelled due to a broken de-icer and a forthcoming storm, Ben finds a charter plane that can take him around the storm and drop him in Denver to catch a connection. And when the pilot says the single engine prop plane can fit one more, if barely, Ben offers the seat to Ashley knowing that she needs to get back just as urgently. And then the unthinkable happens. The pilot has a heart attack mid-flight and the plane crashes into the High Uintas Wilderness– one of the largest stretches of harsh and remote land in the United States… Read more and listen to a sample Internationally acclaimed crime writer Jo Nesbø’s antihero police investigator, Harry Hole, is back: in a bone-chilling thriller that will take Hole to the brink of insanity. Oslo in November. The first snow of the season has fallen. A boy named Jonas wakes in the night to find his mother gone. Out his window, in the cold moonlight, he sees the snowman that inexplicably appeared in the yard earlier in the day. Around its neck is his mother’s pink scarf. Hole suspects a link between a menacing letter he’s received and the disappearance of Jonas’s mother and of perhaps a dozen other women, all of whom went missing on the day of a first snowfall. As his investigation deepens, something else emerges: he is becoming a pawn in an increasingly terrifying game whose rules are devised and constantly revised by the killer.Fiercely suspenseful, its characters brilliantly realized, its atmosphere permeated with evil, The Snowman is the electrifying work of one of the best crime writers of our time… Read more and listen to a sample Thank You For Your Service, by David Finkel
Expected Release: October 27th

No journalist has reckoned with the psychology of war as intimately as David Finkel. In The Good Soldiers, his bestselling account from the front lines of Baghdad, Finkel shadowed the men of the 2-16 Infantry Battalion as they carried out the infamous surge, a grueling fifteen-month tour that changed all of them forever. Now Finkel has followed many of those same men as they’ve returned home and struggled to reintegrateboth into their family lives and into American society at large.
In the ironically named Thank You for Your Service, Finkel writes with tremendous compassion not just about the soldiers but about their wives and children. Where do soldiers belong after their homecoming? Is it possible, or even reasonable, to expect them to rejoin their communities as if nothing has happened? And in moments of hardship, who are soldiers expected to turn to if they feel alienated by the world they once lived in? These are the questions Finkel faces as he revisits the brave but shaken men of the 2-16… Read more and listen to a sample

Which of October’s renditions are you most excited for? Let me know!