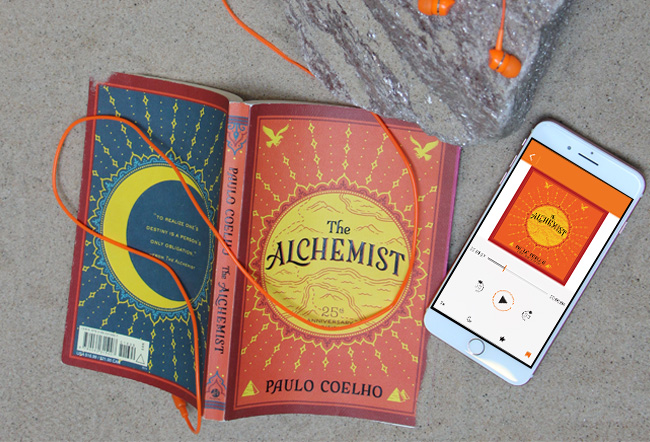 It is my shared Brazilian heritage with author, Paulo Coelho, which led me to his highly acclaimed novel, The Alchemist. This audiobook clocks in at just over four hours and despite its short listening time, I would not classify it as a light read. This novel took me longer than usual to finish, because unlike other audiobooks which I can listen to while multi-tasking, I had to devote my undivided attention to The Alchemist in order to fully appreciate it.

The protagonist in this novel is a young Spanish shepherd by the name of Santiago. Early on in the novel, he has a reoccurring dream about hidden treasure buried beneath the Egyptian pyramids.  Determined to find it, he sets out on a long voyage across the Mediterranean and Sahara. Along the way, he embarks on a journey of self-discovery; Ralph Waldo Emerson’s quote “life is a journey, not a destination” holds especially true throughout the trek. On his quest, he becomes rich in more ways than one as he acquires a plethora of knowledge from those he meets along the way.

The narration of this book was an adventure in and of itself, as Jeremy Irons brought each character to life using distinctive voices.  He used a confidant voice to portray the alchemist as powerful and intelligent, whereas Santiago came across as a free spirit due to the whimsical narration of his character.  Jeremy Irons achieved a perfect harmony between enriching the story and maintaining integrity throughout the narration.

I’ve wracked my brain trying to determine the most influential lesson from The Alchemist; however, it was impossible to choose just one, so I’ve narrowed it down to the top three:

Both moving and thought provoking, it’s easy to see why The Alchemist is regarded as one of Coelho’s best literary works.  Not only is the novel is filled with powerful life lessons, but there is also an abundance of allusions, metaphors and symbols.  Can you spot them all?

I’d love to hear your thoughts, share your favorite quote or takeaway from The Alchemist below!