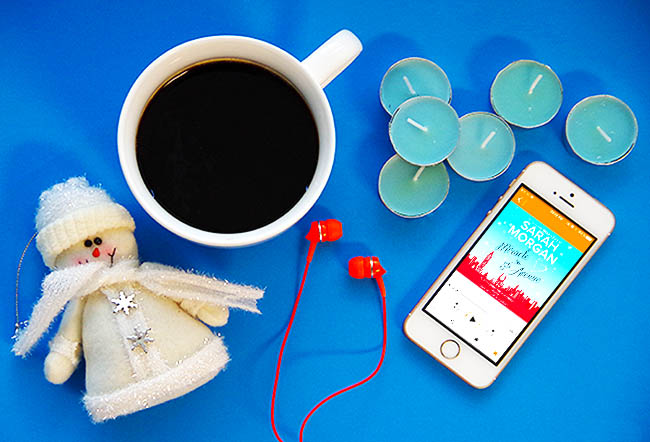 The holidays are a romantic time of the year. From ice skating to sipping hot cocoa by the fire, there’s lots to do with your significant other. Whether your a hopeless romantic or you have a special someone in mind this holiday season, we’ve got an audiobook suggestion for you!

Merry and Bright, by Debbie Macomber Merry Knight is pretty busy these days. She’s taking care of her family, baking cookies, decorating for the holidays, and hoping to stay out of the crosshairs of her stressed and by-the-book boss at the consulting firm where she temps. Her own social life is the last thing she has in mind, much less a man. Without her knowledge, Merry’s well-meaning mom and brother create an online dating profile for her-minus her photo-and the matches start rolling in. Initially, Merry is incredulous, but she reluctantly decides to give it a whirl. It will take a Christmas miracle for two very different souls to find each other in this perfectly festive fairy tale of New York! Hopeless romantic Eva Jordan loves everything about Christmas…Bestselling crime writer Lucas Blade is having the nightmare before Christmas… He wants no interruptions, no decorations and he certainly doesn’t appreciate being distracted by his beautiful, bubbly new housekeeper. But when the blizzard of the century leaves Eva snowbound in his apartment, Lucas starts to open up to the magic she brings This Christmas, is Lucas finally ready to trust that happily-ever-afters do exist? New York writer Tyler Richards is reading her posts. Nursing his own broken heart and trust issues, he finds himself falling for this anonymous blogger. Following a trail of clues LBH has inadvertently revealed, he tracks her down to the small town of Tribe, Alabama. He makes his way there, and begins the search for a Lisa, Lori, maybe a Luanne. Instead, he finds a woman named Kelly to help him track down the mysterious LBH.

Hold Me, Cowboy, by Maisey Yates Stranded with a cowboy for Christmas from New York Times bestselling author Maisey Yates! Oil and water have nothing on Sam McCormack and Madison West. The wealthy rancher has never met a haughtier or more appealing woman in his life. And when they’re snowed in, he’s forced to admit this ice queen can scorch him with one touch Madison had plans for the weekend! Instead she’s stranded with a man who drives her wild. A night of no-strings fun leaves both of them wanting more when they return to Copper Ridge. His proposal: twelve days of hot sex before Christmas! But will it ever be enough? Let us know what you think and share your favorite holiday romance below!