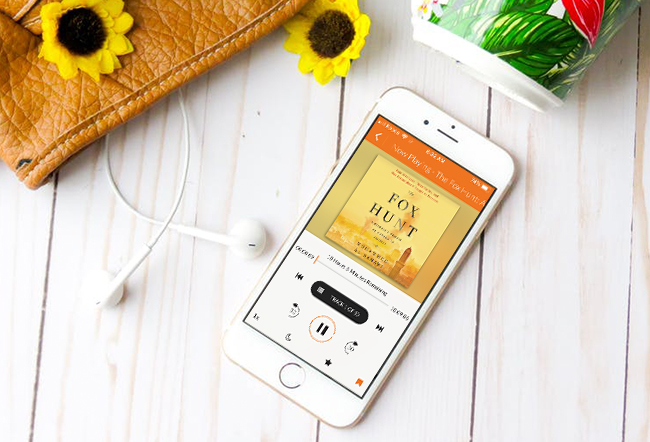 Dive into seven gripping memoirs that detail the lives of an innocent man who spent 30 years on death row, a veterinarian’s profound insight of our relationships with animals, a heroine of resistance, and more.

1. The Fox Hunt: A Refugee’s Memoir of Coming to America by Mohammed Al Samawi, narrated by Assaf Cohen Born in Yemen, Mohammed Al Samawi was a devout Muslim raised to think of Christians and Jews as his enemy. But when Mohammed was 23, he received a copy of the Bible, and what he read cast doubt on everything he’d previously believed. After connecting with Jews and Christians on social media and at various international interfaith conferences, Mohammed became an activist.
Read more and sample the audio. On the outside, Terri Cheney was a highly successful, attractive Beverly Hills entertainment lawyer. But behind her seemingly flawless facade lay a dangerous secret-for the better part of her life Cheney had been battling debilitating bipolar disorder and concealing a pharmacy’s worth of prescriptions meant to stabilize her moods and make her “normal.”
Read more and sample the audio.

3. Unsuccessful Thug: One Comedian’s Journey from Naptown to Tinseltown by Mike Epps, narrated by J.D. Jackson Growing up in “Naptown,” what people who live there really call rough-around-the-edges Indianapolis, Epps found himself forced to hustle from an early age. Despite his mother’s best efforts and the love of his siblings, Epps was drawn to a life of crime, but as he quickly discovered, stealing and dealing didn’t really fit his sweet sensibilities.
Read more and sample the audio. The pursuit of a childhood dream has taken Suzy Fincham-Gray on a journey in veterinary medicine, with thousands of rewarding and emotionally challenging stories collected along the way. Like many physicians, Fincham-Gray tends to see her patients at often life-or-death moments. Her stories expand into deeper explorations of our complex, profound relationships with the animals in our lives.
Read more and sample the audio.

5. The Sun Does Shine: How I Found Life and Freedom on Death Row by Lara Love Hardin and Anthony Ray Hinton, narrated by Bryan Stevenson An arresting memoir of hope, love, justice, and the power of reading written by a man who spent 30 years on death row for a crime he didn’t commit. In 1985, Anthony Ray Hinton was arrested and charged with two counts of capital murder. He knew that it was a case of mistaken identity, but with an incompetent defense attorney and a different system of justice for a poor black man in the South, he was sentenced to death.
Read more and sample the audio. Cecile Richards, president of Planned Parenthood Federation of America and the Planned Parenthood Action Fund for more than a decade, featured speaker at the Women’s March on Washington, and a “heroine of the resistance” (Vogue), comes a story about learning to lead and make change, based on a lifetime of fighting for women’s rights and social justice.
Read more and sample the audio.

7. You All Grow Up and Leave Me: A Memoir of Teenage Obsession by Piper Weiss, narrated by Brittany Pressley Piper Weiss was 14-years-old when her middle-aged tennis coach, Gary Wilensky, killed himself after a failed attempt to kidnap one of his teenage students. In the aftermath, authorities discovered that this well-known figure among the Upper East Side tennis crowd was actually a frightening child predator who had built a secret torture chamber – a “Cabin of Horrors”- in his secluded rental in the Adirondacks.
Read more and sample the audio.