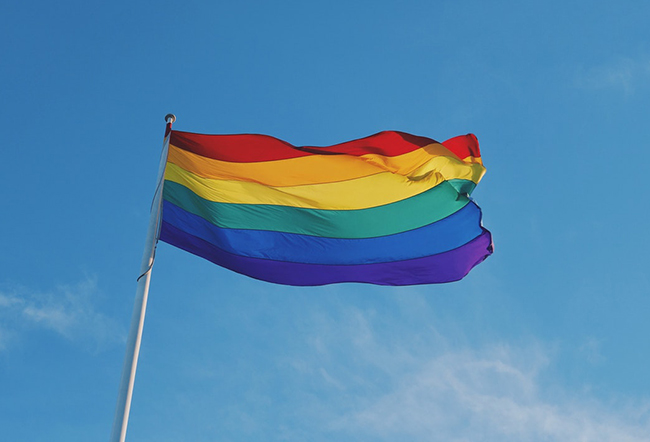 1. Beyond Trans: Does Gender Matter? by Heath Fogg Davis, narrated by Paul Boehmer Beyond Trans pushes the conversation on gender identity to its limits. Whether on birth certificates or college admissions applications or on bathroom doors, why do we need to mark people and places with sex categories? Do they serve a real purpose or are they just mechanisms of exclusion? Davis, himself a transgender man, explores the underlying gender-enforcing policies and customs in American life.
Read more and sample the audio.

2. They Both Die At The End by Adam Silvera, narrated by Bahni Turpin, Robbie Daymond, Michael Crouch A little after midnight, Death-Cast calls Mateo Torrez and Rufus Emeterio to give them some bad news: They’re going to die today. Mateo and Rufus are total strangers, but, for different reasons, they’re both looking to make a new friend on their End Day. The good news: There’s an app for that. It’s called the Last Friend, and through it, Rufus and Mateo meet up for one last great adventure — to live a lifetime in a single day.
Read more and sample the audio.

3. The Gentleman’s Guide to Vice and Virtue by Makenzi Lee, narrated by Christian Coulson Henry “Monty” Montague doesn’t care that his roguish passions are far from suitable for the gentleman he was born to be. But as he embarks on his grand tour of Europe, his quests for pleasure and vice are in danger of coming to an end. Not only does his father expect him to take over the family’s estate upon his return, but Monty is also nursing an impossible crush on his best friend and traveling companion, Percy.
Read more and sample the audio.

4. A Line in the Dark by Malinda Lo, narrated by Jennifer Lim Jess Wong is Angie Redmond’s best friend. And that’s the most important thing, even if Angie can’t see how Jess truly feels. Being the girl no one quite notices is OK with Jess anyway. But when Angie begins to fall for Margot Adams, Jess can see it coming a mile away. As Angie drags Jess further into Margot’s circle, Jess discovers more than her friend’s growing crush. Secrets and cruelty lie just beneath the carefree surface of this world of wealth and privilege, and when they come out, Jess knows Angie won’t be able to handle the consequences.
Read more and sample the audio. An insouciant music school dropout and aimless young writer fix on one another, grab hands and fall head-first down love’s rabbit hole. The pair find themselves mansion-sitting all summer, drinking the liquor cabinets dry and emptying wardrobes to play dress-up. But when they play house in a Big Sur cabin, boredom breeds an idea that could extinguish their love and even destroy them both.
Read more and sample the audio.

6. Girl Mans Up by M-E Girard, narrated by Emma Galvin Pen wants to be the kind of girl she’s always been. So why does everyone have a problem with it? Dressing like a girl and listening to her folks will show respect. Taking orders from her friend Colby will show loyalty. But respect and loyalty are empty words. Old-world parents, disintegrating friendships, and feelings for other girls means that in order for Pen to be who she truly wants to be, she’ll have to man up.
Read more and sample the audio. At its center is a romance: the story of Nelson‘s relationship with the artist Harry Dodge. This story, which includes her account of falling in love with Dodge, who is fluidly gendered, as well as her journey to and through a pregnancy, is an intimate portrayal of the complexities and joys of (queer) family-making.
Read more and sample the audio.

8. A Brief History of Seven Killings by Marlon James, narrated by Ensemble Cast On 3 December 1976, just weeks before Bob Marley was to play the Smile Jamaica Concert to ease political tensions, seven gunmen from West Kingston stormed his house. Marley survived and went on to perform at the free concert. Not a lot was recorded about the fate of the seven gunmen, but much has been said, whispered and sung about in the streets of West Kingston.
Read more and sample the audio.

9. Under the Udala Trees by Chinelo Okparanta, narrated by Robin Miles Under the Udala Trees is a deeply powerful debut about the dangers of living and loving openly. Ijeoma comes of age as her nation does; she is 11 when civil war breaks out in Nigeria. Sent away to safety, she meets another displaced child, and they fall in love. They are from different ethnic communities. They are also both girls. When their love is discovered, she learns to hide this part of herself. But there is a cost to living inside a lie.
Read more and sample the audio.