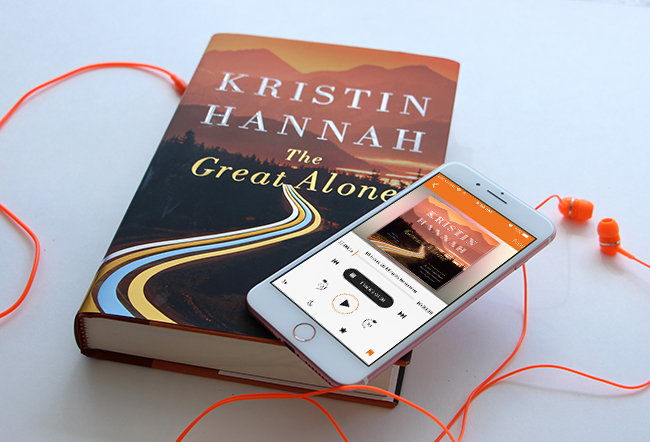 The year may be halfway over, but we’re there’s still plenty of time to catch up the best books of the year (so far!).

1. The Wife Between Us by Greer Hendricks and Sarah Pekkanen, narrated by Julia Whelan When you listen to this audiobook, you will make many assumptions. You will assume you are listening to a story about a jealous ex-wife. You will assume she is obsessed with her replacement – a beautiful, younger woman who is about to marry the man they both love. You will assume you know the anatomy of this tangled love triangle. Assume nothing.
Read more and sample the audio. The first nine months of Donald Trump’s term were stormy, outrageous-and absolutely mesmerizing. Now, thanks to his deep access to the West Wing, bestselling author Michael Wolff tells the riveting story of how Trump launched a tenure as volatile and fiery as the man himself. In this explosive audiobook, Wolff provides a wealth of new details about the chaos in the Oval Office.
Read more and sample the audio. Alaska, 1974. Unpredictable. Unforgiving. Untamed. For a family in crisis, the ultimate test of survival. When Ernt, a former POW, loses yet another job, he decides to move his family to Alaska, where they will live off the grid. Leni, 13, is caught in the riptides of her parents’ stormy relationship. As winter approaches, Ernt’s fragile mental state deteriorates and the family begins to fracture.
Read more and sample the audio.

4. I’ll Be Gone in the Dark: One Woman’s Obsessive Search for the Golden State Killerby Michelle McNamara, narrated by Gabra Zackman

For more than 10 years, a mysterious and violent predator committed 50 sexual assaults in California before perpetrating 10 sadistic murders. Then he disappeared. Three decades later, true crime journalist Michelle McNamara was determined to find the violent psychopath she called “the Golden State Killer” by poring over police reports and interviewing victims.
Read more and sample the audio. Newlyweds Celestial and Roy are the embodiment of both the American Dream and the New South. But as they settle into their new routine, they are ripped apart by unimaginable circumstances. Roy is arrested and sentenced to 12 years for a crime Celestial knows he didn’t commit, creating a stirring love story into the hearts and minds of those bound and separated by forces beyond their control.
Read more and sample the audio.

7. The Outsider by Stephen King, narrated by Will Patton Former FBI director James Comey shares his never-before-told experiences from some of the highest-stakes situations of his career in the past two decades of American government, exploring what good, ethical leadership looks like, and how it drives sound decisions. His journey provides an unprecedented entry into the corridors of power, and a remarkable lesson in what makes an effective leader.
Read more and sample the audio. 10. The President Is Missing by Bill Clinton, James Patterson, narrated by Dennis Quaid The President Is Missing confronts a threat so huge that it jeopardizes not just Pennsylvania Avenue and Wall Street, but all of America. There are whispers of cyberterror and espionage and a traitor in the Cabinet. Even the President himself becomes a suspect, and then he disappears… Filled with information that only a former Commander-in-Chief could know, this is the most authentic, terrifying novel to come along in many years.
Read more and sample the audio.