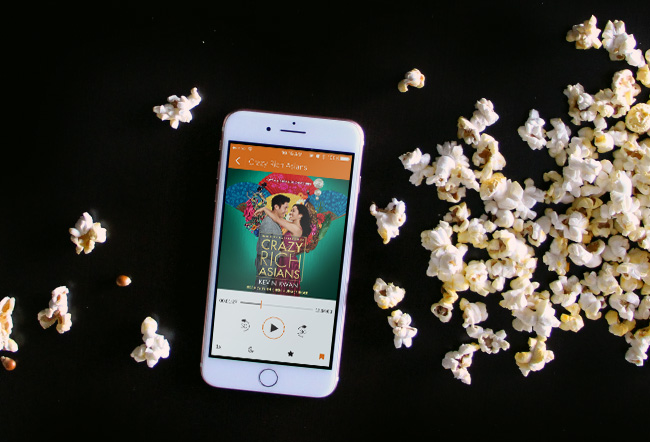 Going to the movies this August? Get the best experience by listening to the books they were based on before seeing the film adaptations. Cora Bender killed a man. But why? What could have caused this quiet, lovable young mother to stab a stranger in the throat, again and again, until she was pulled off his body? Even though Cora confessed, Police Commissioner Rudolf Grovian refused to close the file and began his own maverick investigation. So begins the slow unraveling of Cora’s past. Read more and sample the audio. Ruby might have survived the mysterious disease that had killed most of America’s children, but she and the others emerged with something far worse: frightening abilities they could not control. On the run and desperate to find the only safe haven left for kids like her—East River, Ruby and her friends discover nothing is as it seems when they finally arrive at the one place they thought they would be safe. Read more and sample the audio. Once upon a time, there was a boy named Christopher Robin, who had many friends in the Hundred-Acre Wood. As time passed, the boy grew up, and he lost track of his friends. Then one day, a silly old bear with a love for honey decided to leave the wood and go looking for his friend Christopher Robin. Read more and sample the audio. It’s 1978, and the KKK is on the rise in the United States. When detective Ron Stallworth, the first black detective in the history of the Colorado Springs Police Department, joins the cause undercover, he launches one of the most audacious and incredible investigations in history. Read more and sample the audio. On a top-secret dive into the Pacific Ocean’s deepest canyon, Jonas Taylor found himself face-to-face with the largest and most ferocious predator in the history of the animal kingdom. The sole survivor of the mission, Taylor is haunted by what he’s sure he saw but still can’t prove exists—Carcharodon megalodon, the massive mother of the great white shark. Read more and sample the audio. It’s the dead of night; you are fast asleep. Suddenly, you are wide awake but unable to move. Hunched over you in the shadows is an eight- or nine-foot-tall gaunt entity with spider-thin limbs, dressed in an old-style black suit, its pale face missing eyes, nose, ears, and mouth. You finally manage to cry out. The monstrous thing disappears as suddenly as it appeared. Read more and sample the audio. When Rachel Chu agrees to spend the summer in Singapore with her boyfriend, Nicholas Young, she envisions a humble family home, long drives to explore the island, and quality time with the man she might one day marry. What she doesn’t know is she will soon be initiated into a world of dynastic splendor beyond imagination. Read more and sample the audio.

8. To All the Boys I’ve Loved Before by Jenny Han, narrated by Laura Knight Keating
Expected release date: August 17 Lara Jean Song keeps her love letters in a hatbox her mother gave her. They aren’t love letters that anyone else wrote for her; these are ones she’s written. One for every boy she’s ever loved—five in all. When she writes, she says all the things she would never say in real life, because her letters are for her eyes only. Until the day her secret letters are mailed, and suddenly, Lara Jean’s love life goes from imaginary to out of control. Read more and sample the audio. The moment Joan Castleman decides to leave her husband, they are thirty-five thousand feet above the ocean on a flight to Helsinki. Joan’s husband Joseph is one of America’s preeminent novelists, about to receive a prestigious international award, and Joan, who has spent forty years subjugating her own literary talents to fan the flames of his career, has finally decided to stop. Read more and sample the audio. Living in the Woods in a Tree is an intimate glimpse into the turbulent life of Texas music legend Blaze Foley (1949-1989), seen through the eyes of Sybil Rosen, the woman for whom he wrote his most widely known song, “If I Could Only Fly.” Read more and sample the audio. Set in Hardborough, a small East Anglian coastal town, Florence Green decides, against polite but ruthless local opposition, to open a bookshop. Hardborough becomes a battleground, as small towns so easily do. Florence has tried to change the way things have always been done, and as a result, she has to take on not only the people who have made themselves important, but natural and even supernatural forces too. Read more and sample the audio. One postwar summer, Dr. Faraday is called to a patient at lonely Hundreds Hall. Home to the Ayres family for over two centuries, the Georgian house, once impressive and handsome, is now in decline. Its owners, mother, son, and daughter, are struggling to keep pace with a changing society, as well as with conflicts of their own. But are the Ayreses haunted by something more sinister than a dying way of life? Read more and sample the audio. Somewhere under the freezing Atlantic, a Soviet sub commander has just made a fateful decision. The Red October is heading west. The Americans want her. The Russians want her back. The chase for the highly advanced nuclear submarine is on-and there’s only one man who can find her… Read more and sample the audio.