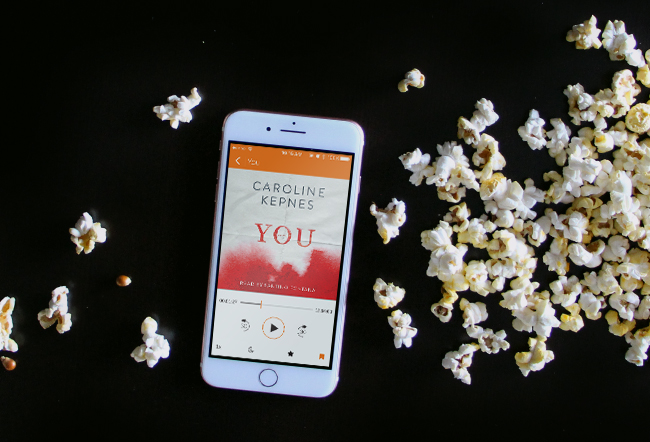 Going to the movies this September? Get the best experience by listening to the books they were based on before seeing the film adaptations. How far would you go for the perfect love? When aspiring writer and recent Brown graduate Guinevere Beck strides into the bookstore where Joe works, he’s instantly smitten. Beck is everything Joe has ever wanted: she’s gorgeous, tough, razor-smart, and as sexy as his wildest dreams. Joe needs to have her, and he’ll stop at nothing to do so. Read more and sample the audio.

There’s something special about eight-year-old Rhoda Penmark. With her carefully plaited hair and her sweet cotton dresses, she’s the very picture of old-fashioned innocence. But when their neighborhood suffers a series of terrible accidents, her mother begins to wonder: Why do bad things seem to happen when little Rhoda is around? Read more and sample the audio. It starts with a simple favor—an ordinary kindness mothers do for one another. When her best friend, Emily, asks Stephanie to pick up her son Nicky after school, she happily says yes. But, when Emily doesn’t come back from her high-demand job in Manhattan, Stephanie knows something is wrong. Then, she receives shocking news. Emily is dead. The nightmare of her disappearance is over.
Or is it? Read more and sample the audio. For centuries Earth has been visited by warlike creatures that stalk mankind’s finest warriors. These deadly hunters kill their prey and depart as invisibly as they arrived, leaving no trace other than a trail of bodies. When a young boy accidentally triggers the universe’s most lethal Hunters’ return to earth, only a ragtag crew of ex-soldiers and a disgruntled science teacher can prevent the end of the human race. Read more and sample the audio. On a May afternoon in 1943, an Army Air Forces bomber crashed into the Pacific Ocean and disappeared, leaving only a spray of debris and a slick of oil, gasoline, and blood. Then, on the ocean surface, a face appeared. It was that of a young lieutenant, the plane’s bombardier, who was struggling to a life raft and pulling himself aboard. So began one of the most extraordinary odysseys of the Second World War. Read more and sample the audio.

The House with a Clock its Walls by John Bellairs, narrated by George Guidall
Expected release date: September 21 When Lewis Barnavelt, an orphan, comes to stay with his uncle Jonathan, he expects to meet an ordinary person. But he is wrong. Uncle Jonathan and his next-door neighbor, Mrs. Zimmermann, are both witches! Lewis is thrilled until he accidentally discovers a clock built into the walls of the house that could obliterate mankind. Read more and sample the audio.

The Sisters Brothers by Patrick DeWitt, narrated by John Pruden Hermann Kermit Warm is going to die. The enigmatic and powerful man known only as the Commodore has ordered it, and his henchmen, Eli and Charlie Sisters, will make sure of it. Though Eli doesn’t share his brother’s appetite for whiskey and killing, he’s never known anything else. But, as the brothers embark on their journey, Eli begins to question what he does for a living–and whom he does it for. Read more and sample the audio. In this mesmerizing collection, David Grann takes the reader on a journey through some of the most intriguing and gripping real-life tales from around the world. Read more and sample the audio.