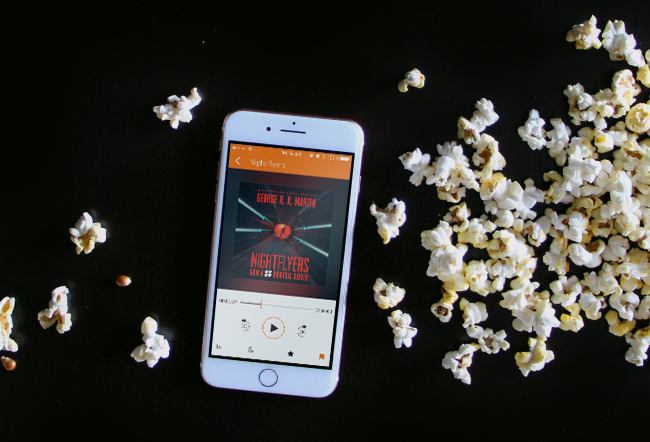 Going to the movies this December? Get the best experience by listening to the books they were based on before seeing the film adaptations. When a scientific expedition is launched to study a mysterious alien race, the ship tasked with this expedition is the Nightflyer, the most advanced ship ever built. But when terrifying and violent events start to occur, the team and crew begin to question themselves, each other, and their reclusive captain.
Read more and sample the audio. Things have always worked out for Willowdean Dickson—the plus-sized daughter of a former beauty queen—until recently. Instead of finding new heights of self-assurance in her new relationship with boyfriend, Bo, Will has started to doubt herself. So, she sets out to take back her confidence by doing the most horrifying thing she can imagine: entering the Miss Clover City beauty pageant.
Read more and sample the audio. In the shadow of Auschwitz, a flamboyant German industrialist grew into a living legend to the Jews of Plaszow. He was a womaniser, a heavy drinker and a bon viveur, but to them, he became a savior. This is the extraordinary story of Oskar Schindler, who used his enormous fortune to build a factory near the Plaszow concentration camp and saved the lives of over 1,300 Jews.
Read more and sample the audio. Emerging from its hiding place in the hills, the great Traction City is chasing a terrified little town across the wastelands. Soon London will feed. In the attack, Tom Natsworthy is flung from the speeding city with a murderous scar-faced girl. They must run for their lives through the wreckage—and face a terrifying new weapon that threatens the future of the world.
Read more and sample the audio. It all starts when their new nanny is blown by the east wind onto the doorstep of the Banks house, carrying a parrot-headed umbrella and a magic carpetbag. She becomes a most unusual nanny to Jane, Michael, and the twins. A day with Mary Poppins is a day of magic and make-believe come to life!
Read more and sample the audio. Manjunath Kumar is fourteen and living in a slum in Mumbai. He knows he is good at cricket—if not as good as his older brother, Radha. When Manju meets Radha’s great rival, a mysterious Muslim boy privileged and confident in all the ways Manju is not, everything in Manju’s world begins to change.
Read more and sample the audio.