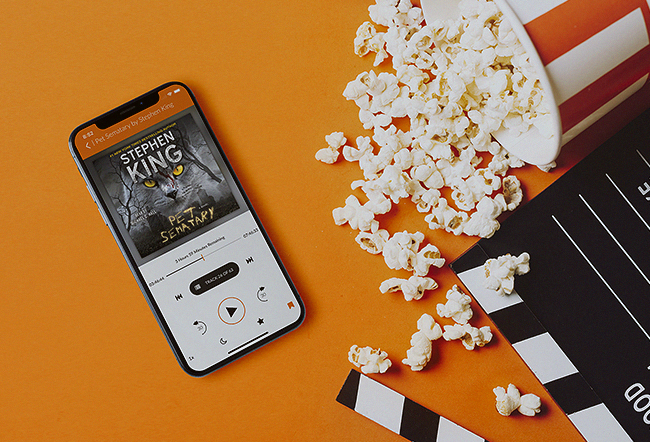 Listeners and bibliophiles all around, rejoice! 2019 is going to be one for the books! From long-awaited adaptations to reboots of classics, avid bookworms will see a host of fantastic books hitting both the big and small screens. Whether you like tearjerkers or award-winners, small screen production or big screen spectacles, there will be something to dive into for everyone. So, brush up on your listening, because this year is sure to be a treat for the eyes and the ears.

90 minutes of watching an adorable dog do adorable things? Sign me up! A Dog’s Way Home, based on the novel by W. Bruce Cameron who also wrote A Dog’s Purpose and A Dog’s Journey, stars Bryce Dallas Howard and Ashley Judd and tells the story of one resilient dog who travels more than 400 miles to make its way back to its owner. Are you feeling the puppy love yet?

The Passage, the first in Justin Cronin’s epic three-part series, is finally coming to the small screen after initially being optioned for a big screen production. A gripping tale of catastrophe and survival, The Passage tells the story of orphan Amy Bellafonte (Saniyya Sidney) who is pursued by the shadowy figures behind a government experiment of apocalyptic proportions. When Special Agent Brad Wolgast (Mark-Paul Gosselaar) is sent to track her down, he becomes disarmed by the curiously quiet girl and risks everything to save her.
Read more and sample the audio.

Daisy Ridley, Tom Holland, and Nick Jonas are joining forces to bring to life Patrick Ness’s bestselling Young Adult series. Based on the first novel in the Chaos Walking Trilogy, The Knife of Never Letting Go, the story is set in a dystopian town called Prentisstown where everyone can hear everyone else’s thoughts. When the only boy in town, Todd (Holland), discovers an awful secret, he’s forced to run for his life.

Maria Semple’s bestselling dramedy begins when notorious and opinionated Bernadette Fox, played by Cate Blanchett, disappears out of the blue. In an effort to track down her mother, Bernadette’s 15-year-old daughter, Bee, combs through email messages, official documents, and secret correspondences to piece together the story of her mother’s troubled past.

After the massive success of It, horror fans will be eager for another flick adapted from Stephen King’s vast body of work. Pet Sematary, first adapted in 1989, returns to the big screen starring Jason Clarke, Amy Seimetz, and John Lithgow. The story centers on a doctor who, after learning about a mysterious pet cemetery that sits on an ancient burial ground, makes the doomed decision to bury his deceased son there in hopes of resurrecting him.

The Best of Enemies: Race and Redemption in the New South by Osha Gray Davidson, narrated by Keith Sellon-Wright
Expected release date: April 5

Based on a true story, the movie, starring Taraji P. Henson and Sam Rockwell, will be adapted from Osha Gray Davidson’s book of the same name that tells the story of the unlikely friendship between Ann Atwater, an outspoken Civil Rights activist, and C.P. Ellis, a Ku Klux Klan leader.

Nicole Yoon fans rejoice! The second novel by the bestselling author of Everything, Everything is being adapted for the big screen and is set to be released on May 19. The story begins with Natasha, a pragmatic teenage girl who meets and falls in love with a boy named Daniel hours before her family is going to be deported back to Jamaica.

Based on Donna Tartt’s Pulitzer Prize-winning novel, this adaptation starring Nicole Kidman, Ansel Elgort, Sarah Paulson, and Jeffrey Wright tells the story of a teenage boy named Theo Decker (Elgort) whose life is changed after surviving a bombing that killed his mother at a museum. Following the shock of the attack, Theo makes a split-second decision to steal a painting which then leads his life down wild and unexpected paths.

more and sample the audio.

Christmas just got a whole lot better with the upcoming adaptation of Louisa May Alcott’s beloved novel about four sisters growing up in New England during the Civil War. Greta Gerwig, the writer and director of 2017’s acclaimed coming-of-age movie Lady Bird, is taking on the latest adaptation of the classic novel with a star-studded cast including Meryl Streep, Emma Watson, Saoirse Ronan, and Laura Dern. (Is it Christmas yet?!)

It’s an apocalyptic year for the small screen. Scheduled for release sometime in 2019, Amazon Prime’s adaptation of Terry Pratchett and Neil Gaiman’s collaborative novel, Good Omens, has an all-star cast featuring David Tennant, Michael Sheen, John Hamm, and Nick Offerman just to name a few. The six-part miniseries begins with a prophesied doomsday, which then sees an angel named Aziraphale (Sheen) and a demon named Crowley (Tennant) teaming up to prevent the coming apocalypse

more and sample the audio.

Although there’s no release date set for BBC’s adaptation of His Dark Materials, production has wrapped for the eight-part series, and fans will soon see the first book in the trilogy, The Golden Compass, come to life on the small screen. Dafne Keen, best known for her role as Wolverine’s daughter in the movie Logan will play the hero, Lyra Belacqua. The series also stars James McAvoy, Lin-Manuel Miranda, and Ruth Wilson and will follow Lyra through parallel universes as she meets a host of fantastical creatures.

Netflix is adapting Jennifer Niven’s heart-wrenching YA bestseller about two teenagers, Violet Markey (Elle Fanning) and Theodore Finch (Justice Smith), who find each other at difficult points in their lives. Together, they set out to discover the wonders of the world around them. Grab your tissues, this is going to be a tearjerker!

New to Audiobooks.com? Get a free audiobook when you sign up for our one-month free trial. Digital audiobooks make audible stories come to life when you’re commuting, working out, cleaning, cooking and more! Listening is easy with our top-rated free audiobook apps for iOS and Android, which let you download & listen to bestselling audiobooks on the go, wherever you are. Click here to get your free audiobook!