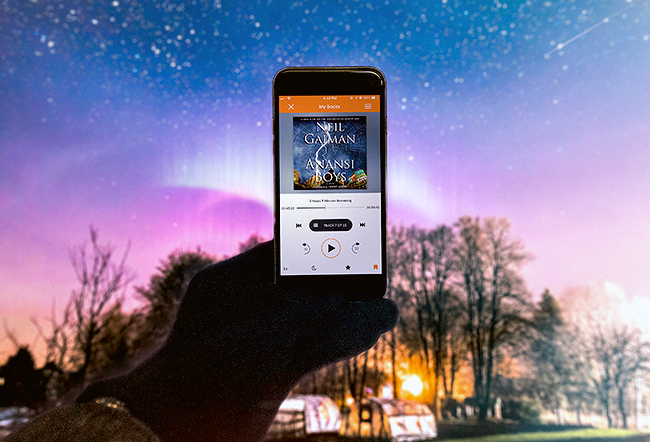 Anansi Boys tells the story of Charles Nancy (Fat Charlie) who, upon learning that his embarrassing and estranged father has died on stage singing karaoke, finds his entire past opening its mysteries to him. Charlie learns of his father’s hidden identity as the African god Anansi, and of his long lost brother, Spider, of whom he has no memory. After an evening of drinking, Charles invites Spider into his life, only to find everything turned upside down. Spider has the powers of a God, and with a word can make people believe whatever he chooses. And Spider chooses a lot of things: including making Fat Charlie’s fiancée believe Spider is Fat Charlie, prompting her to fall in love with the much more dynamic and interesting version of her fiancé.

In this novel, Neil Gaiman explores the idea of stories and storytelling. Interspersed through the various characters’ stories are Anansi’s origins in African mythology. We learn how the trickster Anansi stole all of the stories and controls the flow of stories. We hear how he does bad things, but isn’t a bad person. We also hear of Tiger, a brutal killer, and how he is so often tricked by the clever Anansi. These stories are, like many stories of myth, simple in their presentation, but they serve to offer lessons that the heroes of the tale often need to learn in order to survive the strange circumstances that they find themselves in.

Charles Nancy’s journey is one of self-actualization that so many of us strive for ourselves. He has dreams and aspirations but puts them on hold because he’s afraid of being mocked for trying, and because he believes it’s a failure in itself to lack the very things he wants. It’s only as events with his brother unfold that he is forced to face his own potential, and to move out of his comfort zone.

Anansi Boys is an excellent listen for anyone who wants to believe in a world a little bigger than our own, and who would love to discover their own amazing place in it.

God is dead. Meet the kids.

Fat Charlie Nancy’s normal life ended the moment his father dropped dead on a Florida karaoke stage. Charlie didn’t know his dad was a god. And he never knew he had a brother.

brother Spider’s on his doorstep — about to make Fat Charlie’s life more interesting… and a lot more dangerous.