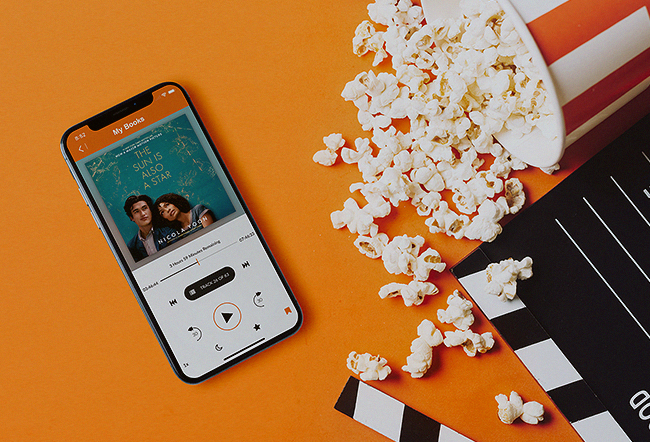 Looking forward to seeing some new movies and shows this May? Take a look below and listen to the audiobook before seeing the film & TV adaptations!

True power is knowing exactly what you want and not allowing anything to get in the way of your dreams. Watch as Catherine of Aragon sets her eyes on the throne in the new Starz mini-series, Spanish Princess. The show is based on The Constant Princess and The King’s Curse by Philippa Gregory and stars Charlotte Hope, Stephanie Levi-John, and Laura Carmichael.

Soon to be a major motion picture starring Yara Shahidi as Natasha and Charles Melton as Daniel! Their love story is anything but simple, and you will be rooting the whole way through for this couple. This will remind you that the smallest gestures are actually the biggest and how the smallest actions can change the course of your life.

Based on the much-loved bestselling book by W. Bruce Cameron, A Dog’s Purpose is heading to the big screen this month! This audiobook shares the heartwarming story about the unbreakable bond between man and dog, told from the perspective of Bailey, a rambunctious golden haired puppy. This film stars Josh Gad, Dennis Quaid, Britt Robertson, and KJ Apa.

George Clooney, executive produces, directs, and stars in Hulu’s upcoming series based on Joseph Heller’s acclaimed classic. Set on the island of Pianosa in the Mediterranean Seas, Catch-22 follows Captain John Yossarian, a U.S. Army Air Forces B-25 bombardier, and a group of airmen as they try to stay sane while completing their missions so they can return home.

According to The Nice and Accurate Prophecies of Agnes Nutter, Witch, The Rapture is coming, and the world is going to end on Saturday. Soon to be an original Amazon Prime series starring Michael Sheen and David Tennant, the adaptation of Terry Pratchett and Neil Gaiman’s collaborative novel is sure to be of apocalyptic proportions. The army’s of Good and Evil are joining together but an angel and a devil are not accepting their fate. Listen to the book to find out what happens!