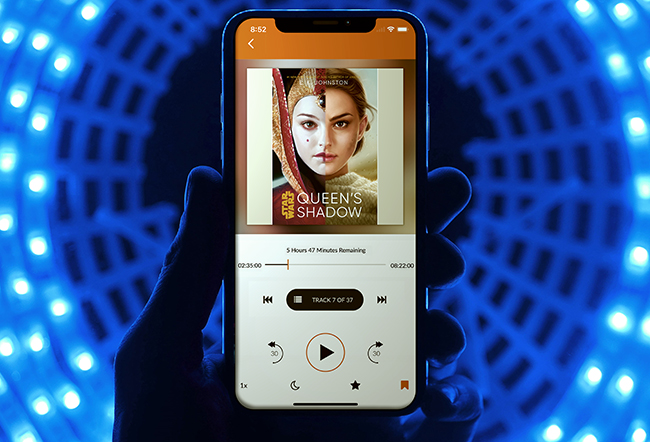 A long time ago, in a galaxy far far away…

Star Wars fans are familiar with the legendary story of Luke Skywalker and how he used to bullseye womp rats back on Tatooine, leading him to successfully bring down the Death Star, or how about the unforgettable tale of the Millenium Falcon? It’s the ship that made the Kessel Run in less than 12 parsecs. These stories are heavily embedded in Star Wars lore, but what about some of the unknown stories?

In Star Wars: Queen’s Shadow we are reunited with Padmé Naberrie, formerly the Queen of Naboo. Now leaving her nobility behind, she finds herself in the middle of the chaotic and dangerous Galactic Senate on the planet of Coruscant. As Queen, Padmé was always so certain of her actions, but as a Senator everything is new. Trying to maneuver her way through the volatile political climate proves challenging as she learns who she can trust and who she cannot.

The narrator Catherine Taber delivers the action-packed book in an energetic and exciting manner. Listeners familiar with the Star Wars saga will enjoy this movie-like audio experience. This book is full of characters that are well-known in the Star Wars universe, and she gives each character a dynamic presence in audio form. Through her tone, the listener can hear both the strength of Padmé as a character who successfully defended her home planet of Naboo from invasion, and her vulnerability as a new Senator attempting to navigate an ever changing political environment.

This is E.K. Johnston’s second Star Wars novel. Similar to her previous novel, Johnston was able to provide more background and history to a character that has such an important role in the fandom that Star Wars fans know and love. She has provided us with a detailed account of the struggles that Padmé faced entering the Galactic Senate because of factors such as her age, gender, and inexperience. There has been a lot of debate recently regarding the way that female characters are portrayed in the media, and Johnston’s portrayal of Padmé shows strength and determination in the face of adversity. Writing a book about such a pivotal character could be a daunting task, however, Johnston effectively bridges what we know about Padmé’s past and future in an exciting read.

Listening to a Star Wars audiobook will be a game-changer for any fan of the movies. I cannot recommend them enough. Other amazing titles to check out would be:
Star Wars Ahsoka, Phasma, and Journey to Star Wars: The Last Jedi Leia, Princess of Alderaan.

When Padmé Naberrie, ‘Queen Amidala’ of Naboo, steps down from her position, she is asked by the newly-elected queen to become Naboo’s representative in the Galactic Senate. Padmé is unsure about taking on the new role, but cannot turn down the request to serve her people. Together with her most loyal handmaidens, Padmé must figure out how to navigate the treacherous waters of politics and forge a new identity beyond the queen’s shadow.