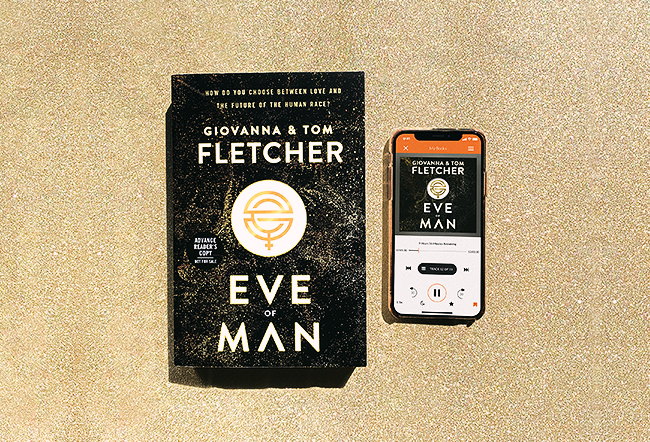 When I was growing up I was always a bit slower at reading than a lot of my classmates which lead me to not want to read books. I would rarely pick up a book to read on my own. When I was in my pre-teens/teens, I started feeling left out because I could not join the conversation about books everyone was reading, specifically, Harry Potter. I then decided even though I was slow, I wouldn’t let that hold me back.

As soon as I was introduced to Teen novels, specifically Action & Adventure as well as Fantasy & Sci-Fi, I was absolutely hooked. From that point on, I was always seeking out new titles in those genres — I had found my calling. Eve of Man fits right in and surely did not disappoint.

Listeners are jolted into the future where no girls have been born in 50 years…until Eve. With the exception of security guards, Eve’s interactions with men are kept to a minimum. As soon as Eve turns 16, she is to fulfill her destiny and find a male suitor to have children with. The catch is she does not really get to choose the gentleman herself. The future of humanity is in her hands. Eve seemed to be on board and not question anything the Mothers told her to do until Bram came along and made her question everything. Now Eve wonders what their true intentions are and realizes her life was always planned out for her. She wants the freedom to make her own decisions, to choose her own path.

Josh Dylan and Charlotte Ritchie did such an amazing job narrating this audiobook. Their accents are so wonderful to listen to and you truly get wrapped up in the story with their characters Bram and Eve. They did such a great job and perfectly narrated this story. I truly felt like I could imagine what a film adaptation would look like with these two narrating the audiobook.

Tom Fletcher and Giovanna Fletcher did such a great job with all these characters, especially Eve, Bram and the three Mothers who take care of Eve. I enjoyed how every chapter rotated between Eve and Bram’s point of view. I cannot wait for the next book in this trilogy to be released in 2020 to see just what Giovanna and Tom have in store for these characters.

This audiobook was a true masterpiece. I would highly recommend this audiobook to anyone who enjoys imaginative, pulse-pounding listens those who were fans of The Handmaid’s Tale, Scythe, The Maze Runner series, and The Hunger Games series.

She survived against all odds. The first girl born in fifty years. They called her EVE.

On the first day, no one really noticed. All those babies wrapped in blue blankets–not a pink one in sight. On the third day, people were scared–a statistic-defying abundance of blue. Not just entire hospitals, not only entire countries, but the entire world. Boys. Only boys.

Until Eve. The only girl born in fifty years. The savior of mankind. Kept protected, towering above a ruined world under a glass dome of safety until she is ready to renew the human race.