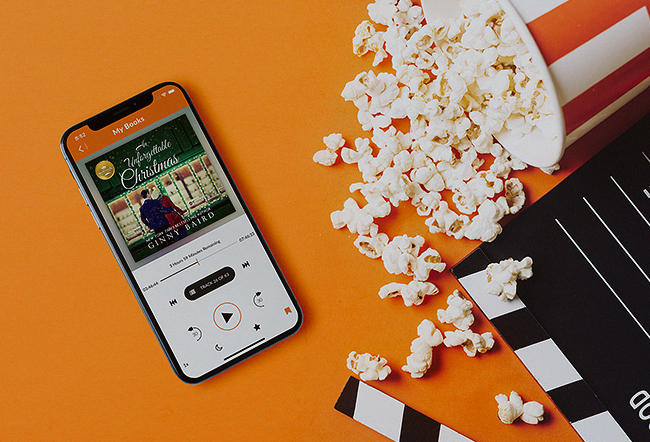 Let It Snow brings the spirit of the holidays to life in three funny and heartwarming interwoven love stories. During an ill-timed storm on Christmas Eve that buries Gracetown under multiple feet of snow, one brave soul ventures out on a journey that will change quite a few lives. Now available exclusively on Netflix, this magical collection of stories from bestselling authors John Green, Maureen Johnson, and Lauren Myracle will steal your breath away!

Christmas in Homestead by Kara Tate, narrated by Emily Lawrence

Two worlds collide when an A-list actress and an innkeeper begin to fall for each other. Matt, the mayor of Homestead, owns an inn where Jessica and her co-star ex-boyfriend are staying in town while they shoot her movie. Matt is wary that the movie will interfere with the town’s Christmas festivities, but as Jessica grows enamored with Homestead and with Matt, he begins to fall for her too. Can an innkeeper and an A-list actress have a romantic future together?

Journey Back to Christmas by Leigh Duncan, narrated by Christine Lakin

This Christmas, Hanna is in for an unexpected miracle! The Christmas Comet appears for the first time after seventy years just as Hanna is caught in a snowstorm and knocked unconscious. When she wakes up in modern times, she is stunned by how different her little town is and isn’t quite sure what happened. Will she be able to get back home with the help of this kind town when this year’s comet appears?

Wrapped Up In Christmas by Janice Lynn, narrated by Arielle Delisle

Sarah has had her heart broken and she pours her energy into working at the church where she makes quilts for wounded soldiers. Meanwhile, after Bodie, an Army Ranger, was injured in an explosion that killed his brothers in arms, he receives a handmade quilt. When he sets out to thank the person who made it for him, he never thought he would find someone like Sarah. Wrapped Up in Christmas is heartwarming, sweet, and full of hope for the season.

A Gingerbread Romance by Lacey Baker, narrated by Adenrele Ojo

When architect Taylor Scott teams up with baker Adam Dale for a gingerbread house competition, neither of them realizes this simple competition will lead to much more. As Taylor and Adam spend more and more time together enjoying Philadelphia’s holiday traditions, Taylor realizes she may have finally found a place to call her own.

Christmas In Evergreen: Letters to Santa by Nancy Naigle, narrated by Kathleen Mcinerney

When Lisa finds the historic general store in her hometown Evergreen has closed, she decides to use her skills as a retail designer to bring it back to its former glory. As contractor Kevin is helping her with the project, they find a mysterious 25-year-old letter to Santa that never made it to the North Pole. Together they try to figure out whose wish it was and if their wish ever came true.

An Unforgettable Christmas by Ginny Baird, narrated by Kyla Garcia

When Angie’s boss, Sam, suffers a head injury that leaves him with amnesia, Angie takes care of him despite her dislike of him and his lifestyle. As Angie begins to see a whole new side of Sam, she begins to fall for him. What will happen, though, if Sam’s memories come back? Will Angie be left with a broken heart?