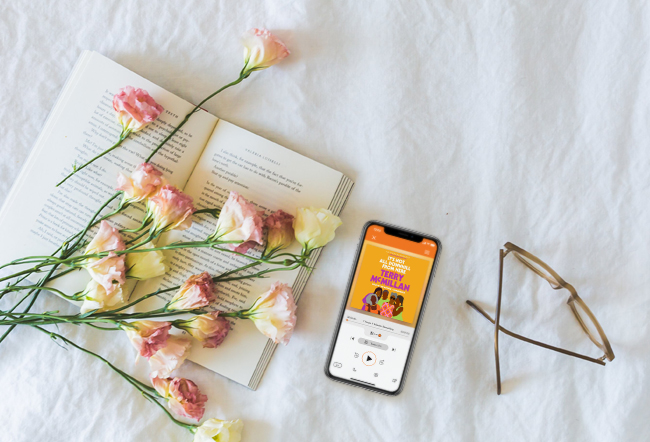 Mother’s Day will be a bit different this year, with many people not being able to celebrate in person. But you can still connect with Mom on this special day through audiobooks. Listen together, start a virtual book club, or gift Mom her next favorite listen. Either way, we’ve got you covered.

Since every mom is totally unique, we’ve put together the ultimate list of top audiobooks for everyone’s tastes. From spooky mysteries to warm and fuzzy memoirs, we’ve got the perfect audiobook for every mom to enjoy this Mother’s Day.

Want to let Mom pick her own audiobooks? When purchasing a prepaid subscription for Audiobooks.com, you give Mom the gift of listening for 1, 3, 6, or 12 months. And this year, all Mother’s Day subscription purchases will be entered to win a bonus 2 free audiobooks, one for you and one for Mom! Learn more here.

The author of In the Time of the Butterflies, with more than one million copies in print, is back with a tour de force.

Antonia Vega, the immigrant writer at the center of Afterlife, has had the rug pulled out from under her. She has just retired from the college where she taught English when her beloved husband, Sam, suddenly dies. And then more jolts: her bighearted but unstable sister disappears, and Antonia returns home one evening to find a pregnant, undocumented teenager on her doorstep.

Loretha Curry’s life is full. A little crowded sometimes, but full indeed. On the eve of her sixty-eighth birthday, she has a booming beauty-supply empire, a gaggle of lifelong friends, and a husband whose moves still surprise. True, she’s carrying a few more pounds than she should be, but Loretha is not one of those women who think her best days are behind her—and she’s determined to prove wrong her mother, her twin sister, and everyone else with that outdated view of aging wrong. It’s not all downhill from here.

The Wedding Dress by Danielle Steel, narrated by Todd Mclaren

In Danielle Steel‘s epic new novel, the lives of four generations of women in one family span fortune and loss, motherhood, tragedy, and victories. From the glamorous San Francisco social scene of the 1920s, through war and the cultural changes of the 60s, to the rise of Silicon Valley today, this extraordinary novel takes us on a family odyssey that is both heartbreaking and inspiring, as each generation faces the challenges of their day.

From the bestselling author of The Things We Cannot Say comes a poignant post-WWII novel that explores the expectations society places on women set within an engrossing family mystery that may unravel everything once believed to be true.

With her father recently moved to a care facility, Beth Walsh volunteers to clear out the family home and is surprised to discover the door to her childhood playroom padlocked. She’s even more shocked at what’s behind it…

The Other Mrs. by Mary Kubica, narrated by Jeremy Arthur, Piper Goodeve

Propulsive and addictive, and perfect for fans of  You, The Other Mrs. is the twisty new psychological thriller from Mary Kubica, the New York Times bestselling author of The Good Girl.

Sadie and Will Foust have only just moved their family from bustling Chicago to small-town Maine when their neighbor Morgan Baines is found dead in her home. The murder rocks their tiny coastal island, but no one is more shaken than Sadie.

The Wives by Tarryn Fisher, narrated by Lauren Fortgang

Thursday’s husband, Seth, has two other wives. She’s never met them, and she doesn’t know anything about them. She agreed to this unusual arrangement because she’s so crazy about him.

But one day, she finds something. Something that tells a very different—and horrifying—story about the man she married. What follows is one of the most twisted, shocking thrillers you’ll ever read.

If It Bleeds by Stephen King, narrated by Will Patton, Steven Weber, Danny Burstein

The novella is a form King has returned to over and over again in the course of his amazing career, and many have been made into iconic films. If It Bleeds is a uniquely satisfying collection of longer short fiction by an incomparably gifted writer.

Something She’s Not Telling Us: A Novel by Darcey Bell, narrated by Pete Simonelli, Carly Robins, Nancy Peterson, Vivienne Leheny

From the New York Times bestselling author of A Simple Favor comes an electrifying domestic thriller of how one woman’s life is turned upside down when her brother brings his new girlfriend to visit—and no one is telling the truth about who they really are.

From its very first page, Something She’s Not Telling Us takes hold of readers’ imagination in a harrowing, unforgettable thriller that dives deep into the domestic psyche and asks the question: Is anyone ever really who they say they are?

An intimate, revealing look at one artist’s journey from self-censorship to full expression.

As one of the most celebrated musicians in the world, Alicia Keys has enraptured the globe with her heartfelt lyrics, extraordinary vocal range, and soul-stirring piano compositions. Yet away from the spotlight, Alicia has grappled with private heartache—over the challenging and complex relationship with her father, the people-pleasing nature that characterized her early career, the loss of privacy surrounding her romantic relationships, and the oppressive expectations of female perfection.

Ali Wong’s heartfelt and hilarious letters to her daughters (the two she put to work while they were still in utero) cover everything they need to know in life, like the unpleasant details of dating, how to be a working mom in a male-dominated profession, and how she trapped their dad.

An extraordinary memoir of drama, tragedy, and royal secrets by Anne Glenconner—a close member of the royal circle and lady-in-waiting to Princess Margaret.

A unique witness to landmark moments in royal history, Maid of Honor at Queen Elizabeth’s coronation, and a lady in waiting to Princess Margaret until her death in 2002, Anne‘s life has encompassed extraordinary drama and tragedy. In Lady in Waiting, she will share many intimate royal stories from her time as Princess Margaret’s closest confidante.

Unorthodox: The Scandalous Rejection of My Hasidic Roots by Deborah Feldman, narrated by Rachel Botchan

Now a Netflix original series! Unorthodox is the bestselling memoir of a young Jewish woman’s escape from a religious sect, in the tradition of Ayaan Hirsi Ali’s Infidel and Carolyn Jessop’s Escape, featuring a new epilogue by the author.

Remarkable and fascinating, this tense and unforgettable coming-of-age story is one you won’t be able to put down.

For many years, Glennon Doyle denied her own discontent. Then, while speaking at a conference, she looked at a woman across the room and fell instantly in love. Three words flooded her mind: There She Is. At first, Glennon assumed these words came to her from on high. But she soon realized they had come to her from within. This was her own voice—the one she had buried beneath decades of numbing addictions, cultural conditioning, and institutional allegiances.

Soulful and uproarious, forceful, and tender, Untamed is both an intimate memoir and a galvanizing wake-up call.

Carrie Underwood believes that fitness is a lifelong journey. She wasn’t born with the toned arms and strong legs that fans know her for. Like all of us, she has to work hard every day to look the way that she does! In Find Your Path she shares her secrets with readers, with the ultimate goal of being the strongest version of themselves, and looking as good as they feel.

By the end of You Are a Badass, you will understand why you are how you are, how to love what you can’t change, how to change what you don’t love, and how to start living the kind of life you used to be jealous of.

Over the Top uncovers the pain and passion it took to end up becoming the model of self-love and acceptance that Jonathan is today. In this revelatory, raw, and rambunctious memoir, Jonathan shares never-before-told secrets and reveals sides of himself that the public has never seen. JVN fans may think they know the man behind the stiletto heels, the crop tops, and the iconic sayings, but there’s much more to him than meets the Queer Eye.

You’ll laugh, you’ll cry, and you’ll come away knowing that no matter how broken or lost you may be, you’re a Kelly Clarkson song, you’re strong, and you’ve got this.