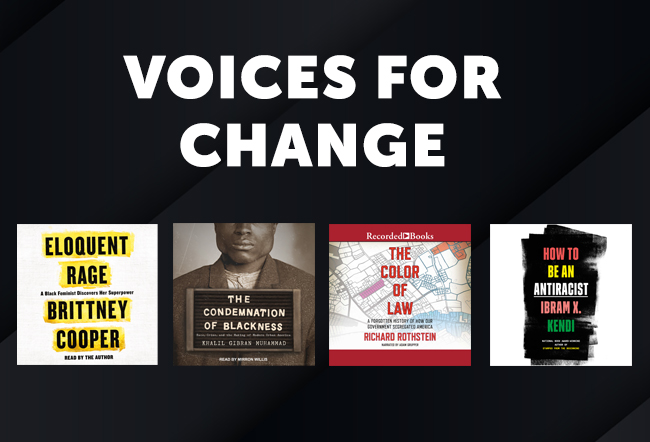 Racism has been built into the structures of our communities. It has become a part of the systems we use to function and won’t waiver without intervention. Now is the time to push forward into a long-overdue change, to unpack the racism that has plagued our society for centuries. Now is the time to not only be “not racist” but to be actively antiracist.

The first step towards change is an understanding of the issues and how they may have shaped each of us. Becoming educated on the topic, and sharing that knowledge when possible, will help make a difference in working towards a future of equality and safety for all.

Based off of the original workbook, Me and White Supremacy teaches listeners how to dismantle the privilege within themselves so that they can stop (often unconsciously) inflicting damage on people of color, and in turn, help other white people do better, too.

When Layla Saad began an Instagram challenge called #meandwhitesupremacy, she never predicted it would spread as widely as it did. She encouraged people to own up and share their racist behaviors, big and small. She was looking for truth, and she got it. Thousands of people participated in the challenge, and over 90,000 people downloaded the Me and White Supremacy Workbook.

The updated and expanded Me and White Supremacy takes the work deeper by adding more historical and cultural contexts, sharing moving stories and anecdotes, and including expanded definitions, examples, and further resources.

Antiracism is a transformative concept that reorients and reenergizes the conversation about racism—and, even more fundamentally, points us toward liberating new ways of thinking about ourselves and each other. At its core, racism is a powerful system that creates false hierarchies of human value; its warped logic extends beyond race, from the way we regard people of different ethnicities or skin colors to the way we treat people of different sexes, gender identities, and body types. Racism intersects with class and culture and geography and even changes the way we see and value ourselves. In How to Be an Antiracist, Kendi takes readers through a widening circle of antiracist ideas—from the most basic concepts to visionary possibilities—that will help readers see all forms of racism clearly, understand their poisonous consequences, and work to oppose them in our systems and in ourselves.

Kendi weaves an electrifying combination of ethics, history, law, and science with his own personal story of awakening to antiracism. This is an essential work for anyone who wants to go beyond the awareness of racism to the next step: contributing to the formation of a just and equitable society.

In a profound work that pivots from the biggest questions about American history and ideals to the most intimate concerns of a father for his son, Ta-Nehisi Coates offers a powerful new framework for understanding our nation’s history and current crisis. Americans have built an empire on the idea of “race,” a falsehood that damages us all but falls most heavily on the bodies of black women and men—bodies exploited through slavery and segregation, and, today, threatened, locked up, and murdered out of all proportion. What is it like to inhabit a black body and find a way to live within it? And how can we all honestly reckon with this fraught history and free ourselves from its burden?

Between the World and Me is Ta-Nehisi Coates’s attempt to answer these questions in a letter to his adolescent son. Coates shares with his son—and readers—the story of his awakening to the truth about his place in the world through a series of revelatory experiences, from Howard University to Civil War battlefields, from the South Side of Chicago to Paris, from his childhood home to the living rooms of mothers whose children’s lives were taken as American plunder. Beautifully woven from personal narrative, reimagined history, and fresh, emotionally charged reportage, Between the World and Me clearly illuminates the past, bracingly confronts our present, and offers a transcendent vision for a way forward.

Austin Channing Brown’s first encounter with a racialized America came at age seven, when she discovered her parents named her Austin to deceive future employers into thinking she was a white man. Growing up in majority-white schools and churches, Austin writes, “I had to learn what it means to love blackness,” a journey that led to a lifetime spent navigating America’s racial divide as a writer, speaker, and expert helping organizations practice genuine inclusion.

In a time when nearly every institution (schools, churches, universities, businesses) claims to value diversity in its mission statement, Austin writes in breathtaking detail about her journey to self-worth and the pitfalls that kill our attempts at racial justice. Her stories bear witness to the complexity of America’s social fabric—from Black Cleveland neighborhoods to private schools in the middle-class suburbs, from prison walls to the boardrooms at majority-white organizations.

For readers who have engaged with America’s legacy on race through the writing of Ta-Nehisi Coates and Michael Eric Dyson, I’m Still Here is an illuminating look at how white, middle-class, Evangelicalism has participated in an era of rising racial hostility, inviting the reader to confront apathy, recognize God’s ongoing work in the world, and discover how blackness—if we let it—can save us all.

So You Want to Talk About Race by Ijeoma Oluo, narrated by Bahni Turpin

A current, constructive, and actionable exploration of today’s racial landscape, offering straightforward clarity that readers of all races need to contribute to the dismantling of the racial divide

In So You Want to Talk about Race, editor-at-large of The Establishment Ijeoma Oluo offers a contemporary, accessible take on the racial landscape in America, addressing head-on such issues as privilege, police brutality, intersectionality, micro-aggressions, the Black Lives Matter movement, and the “N” word. Perfectly positioned to bridge the gap between people of color and white Americans struggling with race complexities, Oluo answers the questions readers don’t dare ask and explains the concepts that continue to elude everyday Americans.

Oluo is an exceptional writer with a rare ability to be straightforward, funny, and effective in her coverage of sensitive, hyper-charged issues in America. Her messages are passionate but finely tuned and crystallize ideas that would otherwise be vague by empowering them with aha-moment clarity.

The Color of Law by Richard Rothstein, narrated by Adam Grupper

In this groundbreaking history of the modern American metropolis, Richard Rothstein, a leading authority on housing policy, explodes the myth that America’s cities came to be racially divided through de facto segregation-that is, through individual prejudices, income differences, or the actions of private institutions like banks and real estate agencies. Rather, The Color of Law incontrovertibly makes clear that it was de jure segregation-the laws and policy decisions passed by local, state, and federal governments-that actually promoted the discriminatory patterns that continue to this day.

The Condemnation of Blackness: Race, Crime, and the Making of Modern Urban America by Khalil Gibran Muhammad, narrated by Mirron Willis

Lynch mobs, chain gangs, and popular views of black southern criminals that defined the Jim Crow South are well known. We know less about the role of the urban North in shaping views of race and crime in American society.

Following the 1890 census—the first to measure the generation of African Americans born after slavery—crime statistics, new migration and immigration trends, and symbolic references to America as the promised land of opportunity were woven into a cautionary tale about the exceptional threat black people posed to modern urban society. Excessive arrest rates and overrepresentation in northern prisons were seen by many whites—liberals and conservatives, northerners and southerners—as indisputable proof of blacks’ inferiority. In the heyday of ‘separate but equal,’ what else but pathology could explain black failure in the ‘land of opportunity?’

The idea of black criminality was crucial to the making of modern urban America, as were African Americans’ own ideas about race and crime. Chronicling the emergence of deeply embedded notions of black people as a dangerous race of criminals by explicit contrast to working-class whites and European immigrants, this fascinating book reveals the influence such ideas have had on urban development and social policies.

With searing honesty, intimacy and humor too, America’s leading young black feminist celebrates the power of rage in this piercing new audiobook.
So what if it’s true that Black women are mad as hell? They have the right to be. In the Black feminist tradition of Audre Lorde, Brittney Cooper reminds us that anger is a powerful source of energy that can give us the strength to keep on fighting.

Far too often, Black women’s anger has been caricatured into an ugly and destructive force that threatens the civility and social fabric of American democracy. But Cooper shows us that there is more to the story than that. Black women’s eloquent rage is what makes Serena Williams such a powerful tennis player. It’s what makes Beyoncé’s girl power anthems resonate so hard. It’s what makes Michelle Obama an icon.

Eloquent rage keeps us all honest and accountable. It reminds women that they don’t have to settle for less. When Cooper learned of her grandmother’s eloquent rage about love, sex, and marriage in an epic and hilarious front-porch confrontation, her life was changed. And it took another intervention, this time staged by one of her homegirls, to turn Brittney into the fierce feminist she is today. In Brittney Cooper‘s world, neither mean girls nor fuckboys ever win. But homegirls emerge as heroes. This audiobook argues that ultimately feminism, friendship, and faith in one’s own superpowers are all we really need to turn things right side up again.