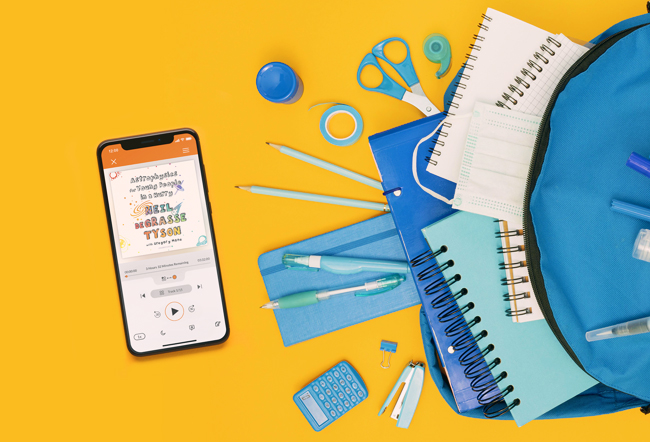 As everyone gears up for another school year, it’s never too early to reignite your kids’ love for learning! Even if they want to hold onto summer a little bit longer (who doesn’t?), you can make learning time fun with audiobooks that the whole family can enjoy together! Pop one on during the car ride to the beach, while they’re cleaning their room, or before bedtime for some snuggly shared listening time.

From history to science to biography, we have something for every kid to dive into! For even more educational non-fiction recommendations for kids, browse our full booklist here.

Astrophysics for Young People in a Hurry by Neil Degrasse Tyson, narrated by Levar Burton

From the basics of physics to big questions about the nature of space and time, celebrated astrophysicist and science communicator Neil deGrasse Tyson breaks down the mysteries of the cosmos into bite-sized pieces. Astrophysics for Young People in a Hurry describes the fundamental rules and unknowns of our universe clearly-and with Tyson’s characteristic wit, there’s a lot of fun thrown in, too.

This adaptation by Gregory Mone includes extra explanations to make even the trickiest concepts accessible. Building on the wonder inspired by outer space, Astrophysics for Young People in a Hurry introduces an exciting field and the principles of scientific inquiry to young listeners.

Did you drink a glass of water today? Did you turn on a light? Did you think about how miraculous either one of those things is when you did it? Of course not—but you should, and New York Times bestselling author Steven Johnson has. This adaptation of his adult book and popular PBS series explores the fascinating and interconnected stories of innovations–like clean drinking water and electricity—that changed the way people live.

Innovation starts with a problem whose solution sets in motion all kinds of unexpected discoveries. That’s why you can draw a line from pendulums to punching the clock at a factory, from ice blocks to summer movie blockbusters, from clean water to computer chips.

In the lively storytelling style that has made him a popular, bestselling author, Steven Johnson looks at how accidental genius, brilliant mistakes, and unintended consequences shape the way we live in the modern world. Johnson’s ‘long zoom’ approach connects history, geography, politics, and scientific advances with the deep curiousity of inventors or quirky interests of tinkerers to show how innovation truly comes about.

His fascinating account is organized into six topics: glass, cold, sound, clean, time, light. Johnson’s fresh exploration of these simple, single-syllable word concepts creates an endlessly absorbing story that moves from lightning strikes in the prehistoric desert to the herculean effort to literally raise up the city of Chicago to laser labs straight out of a sci-fi movie.

In other words, it’s the story of how we got to now!

From writer Stacy McAnulty and illustrator Stevie Lewis, Moon! Earth’s Best Friend is a light-hearted nonfiction audiobook about the formation and history of the moon—told from the perspective of the moon itself.

Meet Moon! She’s more than just a rock—she’s Earth’s rock, her best friend she can always count on. Moon never turns her back on her friend (literally: she’s always facing Earth with the same side!). These two will stick together forever. With characteristic humor and charm, Stacy McAnulty channels the voice of Moon in this next celestial ‘autobiography’ in the Our Universe series.

This edition of Margot Lee Shetterly’s acclaimed book is perfect for young readers. It’s the powerful story of four African-American female mathematicians at NASA who helped achieve some of the greatest moments in our space program.

Before John Glenn orbited the earth, or Neil Armstrong walked on the moon, a group of dedicated female mathematicians known as “human computers” used pencils, slide rules, and adding machines to calculate the numbers that would launch rockets, and astronauts, into space.

This book brings to life the stories of Dorothy Vaughan, Mary Jackson, Katherine Johnson, and Christine Darden, who lived through the Civil Rights era, the Space Race, the Cold War, and the movement for gender equality, and whose work forever changed the face of NASA and the country.

One of Time Out’s “LGBTQ+ books for kids to read during Pride Month,” this groundbreaking, pop-culture-infused LGBTQ+ biography collection takes readers on an eye-opening journey through the lives of fifty influential queer figures who have made a mark on every century of human existence.

Rainbow Revolutionaries brings to life the vibrant histories of fifty pioneering LGBTQ+ people from around the world. Through Sarah Prager’s (Queer, There, and Everywhere) short, engaging bios, readers can delve into the lives of Wen of Han, a Chinese emperor who loved his boyfriend as much as his people, Martine Rothblatt, a trans woman who’s helping engineer the robots of tomorrow, and so many more!

This book is a celebration of the many ways these heroes have made a difference and will inspire young readers to make a difference, too. Featuring an introduction, timeline, and glossary, this must-have biography collection is the perfect read during Pride month and all year round.

Activist, motivational speaker, and daughter of Malcolm X Ilyasah Shabazz celebrates her mother’s idealism and strength of character in a touching new YA audiobook. Betty Before X is the story of Dr. Betty Shabazz before she became a figurehead for the Civil Rights Movement.

In Detroit, 1945, eleven-year-old Betty’s house doesn’t quite feel like home. She believes her mother loves her, but she can’t shake the feeling that her mother doesn’t want her. Church helps those worries fade, if only for a little while. The singing, the preaching, the speeches from guest activists like Paul Robeson and Thurgood Marshall stir African Americans in her community to stand up for their rights. Betty quickly finds confidence and purpose in volunteering for the Housewives League, an organization that supports black-owned businesses. Soon, the American civil rights icon we now know as Dr. Betty Shabazz is born.

Inspired by Betty’s real life—but expanded upon and fictionalized through collaboration with novelist Renée Watson—Ilyasah Shabazz illuminates four poignant years in her mother’s childhood with this audiobook, painting an inspiring portrait of a girl overcoming the challenges of self-acceptance and belonging that will resonate with young listeners today.

Lois Lowry looks back at history through a personal lens as she draws from her own memories as a child in Hawaii and Japan, as well as from historical research, in this stunning work in verse for young listeners.

On the Horizon tells the story of people whose lives were lost or forever altered by the twin tragedies of Pearl Harbor and Hiroshima.  Based on the lives of soldiers at Pearl Harbor and civilians in Hiroshima, On the Horizon contemplates humanity and war through verse that sings with pain, truth, and the importance of bridging cultural divides. This masterful work emphasizes empathy and understanding in search of commonality and friendship, vital lessons for students as well as citizens of today’s world.

In turns haunting, heartbreaking, and uplifting, On the Horizon will remind listeners of the horrors and heroism in our past, as well as offer hope for our future.

Buckle up for an extraordinary ride through the 14-billion year history of absolutely everything! Written and narrated by best-selling world history author Christopher Lloyd, this remarkable story (which is far more amazing than anything you can make up) sweeps through natural history with the creation of planet Earth, the beginning of life, the age of dinosaurs, mass extinctions, and the rise of prehistoric humans. The story then leaps through the ancient civilizations and into medieval times, where wars, revolutions, and scientific inventions reshape the world. Finally we arrive in the modern age which brings with it new challenges of pollution, climate change, viral pandemics, and much more. How will a world of 8 billion humans survive in the future? Ideal for all ages 7–107, this entertaining, fast-paced narrative history connects all the essential dots of the past with personality, humor, and flair.

From Newbery Honor medalist Susan Campbell Bartoletti and in time to celebrate the 100th anniversary of woman suffrage in America comes the tirelessly researched story of the little-known DC Women’s March of 1913.

Bartoletti spins a story like few others—deftly taking readers by the hand and introducing them to suffragettes Alice Paul and Lucy Burns. Paul and Burns met in a London jail and fought their way through hunger strikes, jail time, and much more to win a long, difficult victory for America and its women.