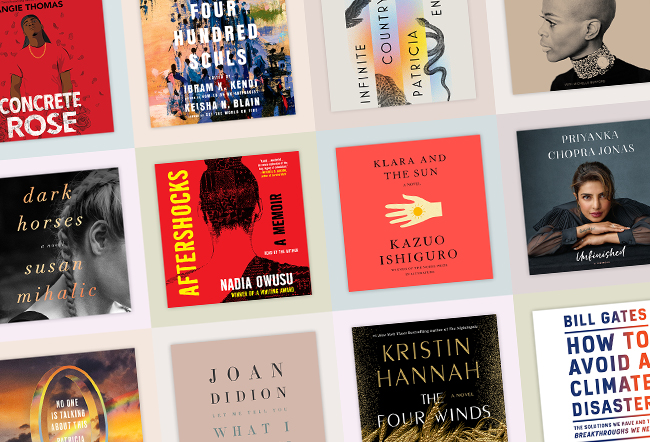 Grab your pen and paper, your TBR list is about to get a serious dose of awesomeness.

From new works by literary juggernauts to exciting fiction and non-fiction from Hollywood stars, 2021 is certainly shaping up to be one for the books. We’ve rounded up 25 of the most anticipated audiobooks coming out in spring 2021 so you can make sure there will never be a dull moment for your ears.

For even more audiobooks you won’t want to miss, check out our Most Anticipated Upcoming Books book list.

Blythe Connor is determined that she will be the warm, comforting mother to her new baby Violet that she herself never had. But in the thick of motherhood’s exhausting early days, Blythe becomes convinced that something is wrong with her daughter—she doesn’t behave like most children do.

Or is it all in Blythe’s head?

From the New York Times bestselling, Booker Prize–winning author of Lincoln in the Bardo and Tenth of December comes a literary master class on what makes great stories work and what they can tell us about ourselves—and our world today.

In the tradition of The Glass Castle, a deeply felt memoir from Whiting Award–winner Nadia Owusu about the push and pull of belonging, the seismic emotional toll of family secrets, and the heart it takes to pull through.

If there’s one thing seventeen-year-old Maverick Carter knows, it’s that a real man takes care of his family. As the son of a former gang legend, Mav does that the only way he knows how: dealing for the King Lords. With this money he can help his mom, who works two jobs while his dad’s in prison.

Life’s not perfect, but with a fly girlfriend and a cousin who always has his back, Mav’s got everything under control.

Until, that is, Maverick finds out he’s a father.

Reese almost had it all: a loving relationship with Amy, an apartment in New York City, a job she didn’t hate. She had scraped together what previous generations of trans women could only dream of: a life of mundane, bourgeois comforts. The only thing missing was a child. But then her girlfriend, Amy, detransitioned and became Ames, and everything fell apart.

Combining the cinematic power of Fellini’s Amarcord with the poignance of John McGahern’s writing, Walking with Ghosts is both a moving exploration of the pathos in what it means to be famous and a singular account of Irish boyhood.

Just As I Am: A Memoir by Cicely Tyson, narrated by Viola Davis, Robin Miles, Cicely Tyson (HarperAudio; January 26)

At last, the Academy, Tony, and three-time Emmy Award-winning actor and trailblazer, Cicely Tyson, tells her stunning story, looking back at her six-decade career and life.

Let Me Tell You What I Mean by Joan Didion, narrated by Kimberly Farr (Random House Audio; January 26)

From one of our most iconic and influential writers: a timeless collection of mostly early pieces that reveal what would become Joan Didion’s subjects, including the press, politics, California robber barons, women, and her own self-doubt.

The first novel in nearly twenty years from the acclaimed actor/writer/director is a book about art and love, fame and heartbreak—a blistering story of a young man making his Broadway debut in Henry IV just as his marriage implodes.

A chorus of extraordinary voices comes together to tell one of history’s great epics: the four-hundred-year journey of African Americans from 1619 to the present—edited by Ibram X. Kendi, author of How to Be an Antiracist, and Keisha N. Blain, author of Set the World on Fire.

From Kristin Hannah, the #1 New York Times bestselling author of The Nightingale and The Great Alone, comes an epic novel of love and heroism and hope, set against the backdrop of one of America’s most defining eras—the Great Depression.

Tiller is an average American college student with a good heart but minimal aspirations. Pong Lou is a larger-than-life, wildly creative Chinese American entrepreneur who sees something intriguing in Tiller beyond his bored exterior and takes him under his wing. When Pong brings him along on a boisterous trip across Asia, Tiller is catapulted from ordinary young man to talented protégé, and pulled into a series of ever more extreme and eye-opening experiences that transform his view of the world, of Pong, and of himself.

In this thoughtful and revealing memoir, readers will accompany one of the world’s most recognizable women on her journey of self-discovery.

A remarkable life story rooted in two different worlds, Unfinished offers insights into Priyanka Chopra Jonas’s childhood in India; her formative teenage years in the United States; and her return to India, where against all odds as a newcomer to the pageant world, she won the national and international beauty competitions that launched her global acting career.

Under a White Sky: The Nature of the Future by Elizabeth Kolbert, narrated by Rebecca Lowman (Simon & Schuster Audio; February 9)

The New York Times bestselling author of The Sixth Extinction and Field Notes from a Catastrophe returns to examine how the very sorts of interventions that have imperiled our planet are increasingly seen as the only hope for its salvation. By turns inspiring, terrifying, and darkly comic, Under a White Sky is an utterly original examination of the challenges we face.

Feyre, Rhys, and their close-knit circle of friends are still busy rebuilding the Night Court and the vastly-changed world beyond. But Winter Solstice is finally near, and with it, a hard-earned reprieve. Yet even the festive atmosphere can’t keep the shadows of the past from looming. As Feyre navigates her first Winter Solstice as High Lady, she finds that those dearest to her have more wounds than she anticipated—scars that will have far-reaching impact on the future of their Court.

Fifteen-year-old equestrian prodigy Roan Montgomery has only ever known two worlds: inside the riding arena, and outside of it. Both, for as long as she can remember, have been ruled by her father, who demands strict obedience in all areas of her life. The warped power dynamic of coach and rider extends far beyond the stables, and Roan’s relationship with her father has long been inappropriate. She has been able to compartmentalize that dark aspect of her life, ruthlessly focusing on her ambitions as a rider heading for the Olympics, just as her father had done. However, her developing relationship with Will Howard, a boy her own age, broadens the scope of her vision.

How to Avoid a Climate Disaster: The Solutions We Have and the Breakthroughs We Need by Bill Gates, narrated by Wil Wheaton (Random House Audio; February 16)

In this urgent, authoritative book, Bill Gates sets out a wide-ranging, practical—and accessible—plan for how the world can get to zero greenhouse gas emissions in time to avoid a climate catastrophe.

No One Is Talking About This by Patricia Lockwood, narrated by Kristen Sieh (Penguin Audio; February 16)

As this urgent, genre-defying book opens, a woman who has recently been elevated to prominence for her social media posts travels around the world to meet her adoring fans. She is overwhelmed by navigating the new language and etiquette of what she terms ‘the portal,’ where she grapples with an unshakable conviction that a vast chorus of voices is now dictating her thoughts.

We Begin at the End by Chris Whitaker, narrated by George Newbern (Macmillan Audio; March 2)

Walk has never left the coastal California town where he grew up. He may have become the chief of police, but he’s still trying to heal the old wound of having given the testimony that sent his best friend, Vincent King, to prison decades before. Now, thirty years later, Vincent is being released.

From the celebrated author of the New York Times bestseller Behold the Dreamers comes a sweeping, wrenching story about the collision of a small African village and an American oil company.

In Firekeeper’s Daughter, debut author Angeline Boulley crafts a groundbreaking YA thriller about a Native teen who must root out the corruption in her community, for fans of Angie Thomas and Tommy Orange.

A sweeping, masterful debut about a daughter’s fateful choice, a mother motivated by her own past, and a family legacy that begins in Cuba before either of them were born. From 19th-century cigar factories to present-day detention centers, from Cuba to Mexico, Gabriela Garcia’s Of Women and Salt is a kaleidoscopic portrait of betrayals—personal and political, self-inflicted and those done by others—that have shaped the lives of these extraordinary women.