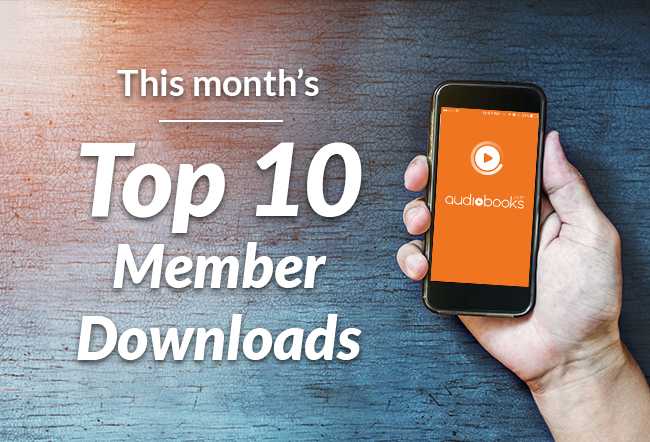 Long ago, in a time forgotten, a preternatural event threw the seasons out of balance. In a land where summers can last decades and winters a lifetime, trouble is brewing. The cold is returning, and in the frozen wastes to the north of Winterfell, sinister and supernatural forces are massing beyond the kingdom’s protective Wall.

2. It by Stephen King, narrated by Steven Weber

Stephen King’s #1 national bestseller about seven adults who return to their hometown to confront a nightmare they had first stumbled on as teenagers…an evil without a name: It.

3. Before We Were Yours: A Novel by Lisa Wingate, narrated by Catherine Taber and Emily Rankin Two families, generations apart, are forever changed by a heartbreaking injustice in this poignant novel, inspired by a true story, for readers of Orphan Train and The Nightingale.

4. The Good Daughter: A Novel by Karin Slaughter, narrated by Kathleen Early The stunning new novel from the international #1 bestselling author-a searing, spellbinding blend of cold-case thriller and psychological suspense.Two girls are forced into the woods at gunpoint. One runs for her life. One is left behind …

5. The Late Show by Michael Connelly, narrated by Katherine Moennig Renée Ballard works the night shift in Hollywood, beginning many investigations but finishing none, as each morning she turns everything over to the day shift. A once up-and-coming detective, she’s been given this beat as punishment after filing a sexual harassment complaint against a supervisor.

1. The Glass Castle: A Memoir by Jeannette Walls, narrated by the author Jeannette Walls grew up with parents whose ideals and stubborn nonconformity were both their curse and their salvation… For two decades, Jeannette Walls hid her roots. Now she tells her own story.

2. You Are a Badass: How to Stop Doubting Your Greatness and Start Living an Awesome Life by Jen Sincero, narrated by the author 3. Unfu*k Yourself, by Gary John Bishop, narrated by the author Are you tired of feeling fu*ked up? If you are, Gary John Bishop has the answer. In this straightforward handbook, he gives you the tools and advice you need to demolish the slag weighing you down and become the truly unfu*ked version of yourself.

4. Just Mercy: A Story of Justice and Redemption, by Bryan Stevenson, narrated by the author An American Library Association Notable BookA powerful true story about the potential for mercy to redeem us, and a clarion call to fix our broken system of justice from one of the most brilliant and influential lawyers of our time Bryan Stevenson was a young lawyer when he founded the Equal Justice Initiative, a legal practice dedicated to defending those most desperate and in need…

5. How to Read Literature Like a Professor: A Lively and Entertaining Guide to Reading Between the Lines, by Thomas C. Foster, narrated by David DeVries What does it mean when a fictional hero takes a journey?. Shares a meal? Gets drenched in a sudden rain shower? Often, there is much more going on in a novel or poem than is readily visible on the surface-a symbol, maybe, that remains elusive, or an unexpected twist on a character-and there’s that sneaking suspicion that the deeper meaning of a literary text keeps escaping you.