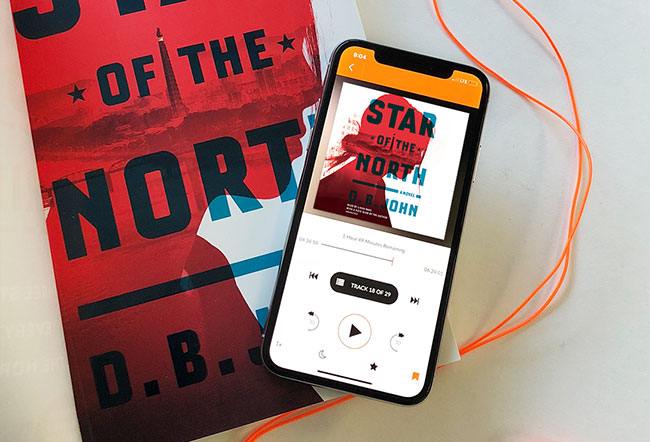 Compelling and well-researched, Star of the North is a spy thriller based in North Korea and the United States. I was rapt; whenever I had the chance, my headphones were back on my ears. The story begins with an American girl being kidnapped from a South Korean beach. With no body found, her twin sister and family believes that she drowned off the shore. The twin lives for years with this belief, until she’s contacted by the CIA. On the other side of the world, we follow separate stories of North Korean citizens; Cho, an esteemed official, liaises with the U.S. while a peasant, Mrs. Moon, begins a career as a street merchant.

The book is as captivating as it is thought-provoking. The lifestyle of these characters is so far removed from what we know that it was difficult to imagine, let alone accept as true. While the story lines range from poverty to diplomacy, they have themes in common. Each character has their own form of suffering, manipulation, and perseverance that endears you to them. I particularly loved Mrs. Moon, fondly known as Ajumma. The book explains “ajumma” as the Korean word for “auntie,” and she was just that for many around her. The author wrote characters whose humanity shone through despite terrible circumstances, making it that much more of a compelling read.

Linda Park does a great job narrating this novel. She keeps a steady, suspenseful pace and her tone is clear. Her South Korean background helped her execute the Korean words confidently so I learned the pronunciation, which I surely would have gotten wrong.

This was a fascinating and educational listen. At the end of the book there is an author’s note (read by D.B. John), which details fact vs. fiction and recommends some further reading. Throughout the book I often assumed things were fiction, but I was surprised to find how much of the book was based on real accounts from North Korea. I don’t usually reach for political dramas, but with this one I’m very glad I did. Read more and listen to a sample here.