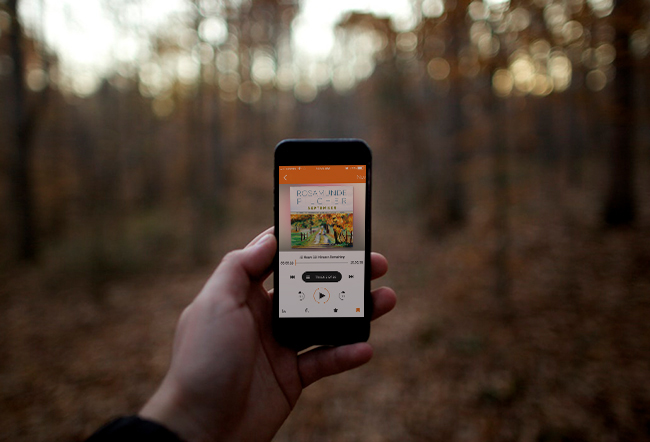 As much as I enjoy the summer, fall has always been my favorite season. I love the changing of the leaves, the excitement of being spooked, and catching up with family around a crowded Thanksgiving table (the food is a bonus). If you’re looking to make the most of this season, we’ve got 10 great audiobooks to pair with 10 fun fall activities. Tell us which is your favorite in the comments!

1. Apple picking
Don’t have anyone to go apple picking with? Take in the scenery solo while getting lost in an audiobook and orchard.
September by Rosamunde Pilcher, narrated by Jilly Bond In Strathcroy, Scotland, retiree Violet Aird watches as her son Edmund’s marriage and family threaten to fall apart. But in the picturesque countryside of green fields, purple blooms, and glittering lakes in the month of September, a local ball will help wounds heal and hearts mend.
Read more and sample the audio.

2. Making a Halloween costume
My artistic skills are mediocre at best, but that hasn’t stopped me from spending hours working on the perfect Halloween costume. This painful for me (but fun for some) process is best enjoyed with a spooky audiobook playing in the background.
Dark Witch by Nora Roberts, narrated by Katherine Kellgren Iona Sheehan arrives in Ireland with nothing but her Nan’s directions, an optimistic attitude, and a talent with horses. Not far from the castle where she’s spending a week, she lands a job at the local stables and meets the owner, Boyle McGrath. Iona realizes that here she can make a home for herself — and live her life as she wants, even if that means falling head over heels for Boyle. But nothing is as it seems.
Read more and sample the audio.

3. Pumpkin carving
Remember when I said my artistic skills are mediocre at best? Nothing is scarier than how poorly and hilariously I carve a pumpkin, but it’s one of my favorite fall traditions. Pairing it with a hauntingly good author (Robert Galbraith, a pseudonym for J.K. Rowling) makes pumpkin carving even more memorable.
Lethal White by Robert Galbraith, narrated by Robert Glenister When Billy, a troubled young man, comes to private eye Cormoran Strike’s office to ask for his help investigating a crime he thinks he witnessed as a child, Strike is left deeply unsettled. While Billy is obviously mentally distressed and cannot remember many concrete details, there is something sincere about him and his story. But before Strike can question him further, Billy bolts from his office in a panic.
Read more and sample the audio.

4. Hiking through fall foliage
Fall is the ultimate season for embracing change, and who more perfect to narrate the theme of this season than the fabulous Brené Brown? Walking through a forest or park with changing leaves always inspires me to think about how I want to transform myself and my thinking — and this audiobook is the perfect way to start.
Daring Greatly by Brené Brown, narrated by Brené Brown From thought leader Brené Brown, a transformative new vision that teaches us the power of vulnerability. Every day we experience the uncertainty, risks, and emotional exposure that define what it means to be vulnerable or to dare greatly. Based on years of pioneering research, Brown dispels the cultural myth that vulnerability is weakness and argues that it is, in truth, our most accurate measure of courage.
Read more and sample the audio.

5. Baking fall treats
Who doesn’t love a baked seasonal treat? An audiobook won’t care if your baking skills are more Easy Bake Oven than Martha Stewart — and what better story to listen to while baking than one of our favorite cozy mystery series?
Apple Turnover Murder by Joanne Fluke, narrated by Suzanne Toren Hannah is feeling the heat when she agrees to bake apple turnovers for a fundraiser and partake in the
charity talent contest. But when Hannah discovers the MC dead with one of her apple turnovers in his hand, she realizes someone has murder on the menu.
Read more and sample the audio.

6. Waiting for trick-or-treaters
Whether you live in the middle of nowhere and are lucky to get one trick-or-treater or live somewhere that requires you to blow out your pumpkin’s candles once you run out of candy, playing a fun, Halloween mystery is a unique way to greet your trick-or-treaters. Bonus points if you play it loud enough that they can hear it from the street!
Candy Corn Murder by Leslie Meier, narrated by Lisa Larson Lucy’s annoyed that her husband Bill and his friend Evan have been working nonstop on their pumpkin catapult. But when the day of the contest arrives, Evan is nowhere to be found, until a catapulted pumpkin reveals his corpse — and Bill is blamed. If Lucy wants to find the real killer, she’ll have to step into an old ghost story.
Read more and sample the audio.

7. Hosting a Halloween party
Avoid having your guests shift uncomfortably when The Monster Mash comes onto the speakers and surprise them with this quintessential horror story. Narrated by Eliana Shaskan in a tone that will raise the hairs on your arm, you’ll wish the party would quiet down so you can soak in every scary detail.
The Exorcist by William Peter Blatty, narrated by William Peter Blatty and Eliana Shaskan

8. Cozying up with a cup of apple cider or hot chocolate
The best way to beat a cold day? Curling up with your favorite blanket, a cup of something warm, and a story that’s filled with so many juicy twists and turns that you might just have to stay cozied up until it’s done (what a shame!).
A Willing Murder by Jude Deveraux, narrated by Susan Bennett When Sara Medlar decides to remodel a grand old mansion, she doesn’t plan on staying with her estranged family — and not being the only houseguest. Jackson Wyatt has his own room, and though she can’t deny his good looks, no one’s ever irritated her quite like he does. But when two skeletons are accidentally uncovered in the quiet town, they’re thrust together to unravel the small town’s dark secrets.
Read more and sample the audio.

9. Preparing Thanksgiving dinner
Thanksgiving is my favorite holiday: it’s noncommercial, involves a delicious home cooked feast, and time spent with family and friends. It’s also the ultimate time to practice the art of gratitude, which we would all benefit from if we did it more. This audiobook will help give you that warm, fuzzy Thanksgiving feeling all year long.
365 Thank Yous by John Kralik, narrated by John Kralik At 53, John Kralik hit a low: his law firm was failing, he was struggling through a painful second divorce, his kids were distant, he was living in a crappy apartment, his girlfriend left him, he was 40 pounds overweight, and his dreams were out of reach. Then, during a lovely walk, John was struck by the belief that his life might become at least tolerable if he could find some way to be grateful for what he had.
Read more and sample the audio.

10. Making fall crafts
Painted mason jars, leafy wreaths, and gourd displays have been racking up my craft board on Pinterest for months. Now that it’s fall, I’m finally setting aside some time to make them. Dive even deeper into the fall spirit with an audiobook that practically makes the season a character.
It Happened One Autumn by Lisa Kleypas, narrated by Rosalyn Landor Lillian Bowman was shocked when the insufferable and snobbish Marcus, London’s most eligble aristocrat, swept her into his arms. Lillian was overcome with a passion for a man she didn’t even like. Marcus was a man in charge of his own emotions, but with Lillian, every touch was exquisite torture, every kiss an enticement for more. Yet how could he consider taking a woman so blatantly unsuitable as his bride?
Read more and sample the audio.