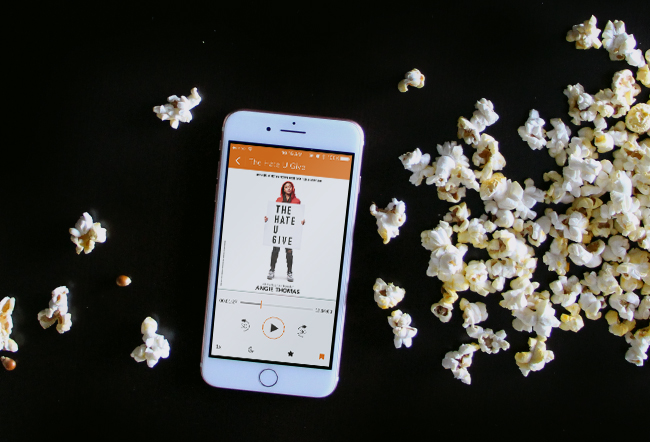 Going to the movies this October? Get the best experience by listening to the books they were based on before seeing the film adaptations.

1. The Hate U Give by Angie Thomas, narrated by Bahni Turpin
Expected release date: October 5, 2018 (limited) Sixteen-year-old Starr Carter moves between two worlds: the poor neighborhood where she lives and the fancy suburban prep school she attends. The uneasy balance between these worlds is shattered when Starr witnesses the fatal shooting of her childhood best friend Khalil at the hands of a police officer. Khalil was unarmed. Read more and sample the audio. Before meth, David Sheff’s son, Nic, was a varsity athlete, honor student, and award-winning journalist. After meth, he was a trembling wraith who lied, stole money from his eight-year-old brother, and lived on the streets. With poignant candor, Sheff traces the first warning signs—denial, 3 a.m. phone calls—the attempts at rehabilitation, and, at last, the way past addiction.
Read more and sample the audio. When Apollo 11 touched down on the Moon’s surface in 1969, the first man on the Moon became a legend. Based on over fifty hours of interviews with Lance Armstrong, who also gave Hansen exclusive access to private documents and family sources, this “magnificent panorama of the second half of the American twentieth century” is an unparalleled biography of an American icon.
Read more and sample the audio. Four seekers have come to the ugly, abandoned old mansion. At first, their stay seems destined to be merely a spooky encounter with inexplicable noises and self-closing doors, but Hill House is gathering its powers and will soon choose one of them to make its own.
Read more and sample the audio.

5. Can You Ever Forgive Me?: Memoirs of a Literary Forger by Lee Israel, narrated by Jane Curtin
Expected release date: October 19 In 1990, Lee Israel made a bold and irreversible career change: inspired by a letter she’d received once from Katharine Hepburn, and armed with her considerable skills as a researcher and celebrity biographer, she began to forge letters in the voices of literary greats. Between 1990 and 1991, she wrote more than three hundred letters and sold the forgeries to memorabilia and autograph dealers.
Read more and sample the audio. In the tradition of The Joy of Cooking and How to Cook Everything comes Salt, Fat, Acid, Heat, an ambitious new approach to cooking by a major new culinary voice. By explaining the hows and whys of good cooking, Salt, Fat, Acid, Heat will teach and inspire a new generation of cooks how to confidently make better decisions in the kitchen and cook delicious meals with any ingredients, anywhere, at any time.
Read more and sample the audio.