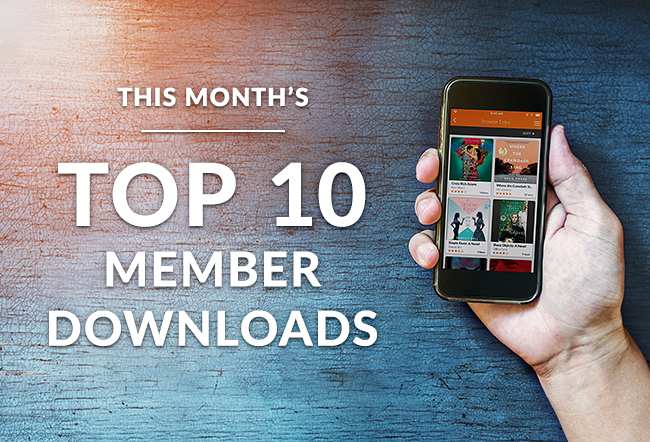 When Rachel Chu agrees to spend the summer in Singapore with her boyfriend, Nicholas Young, she envisions a humble family home, long drives to explore the island, and quality time with the man she might one day marry. What she doesn’t know is she will soon be initiated into a world of dynastic splendor beyond imagination. Read more and sample the audio.

2. Where the Crawdads Sing by Delia Owens, narrated by Cassandra Campbell In late 1969, when handsome Chase Andrews is found dead, the locals immediately suspect Kya Clark, the so-called Marsh Girl who haunts Barkley Cove. But Kya is not what they say. Sensitive and intelligent, she has survived for years alone in the marsh that she calls home. When two young men from town become intrigued by her wild beauty, Kya opens herself to a new life—until the unthinkable happens. Read more and sample the audio. Reporter Camille Preaker must return to her tiny hometown to cover the murders of two preteen girls. For years, Camille has hardly spoken to her mother or to the half-sister she barely knows. Dogged by her own demons, she must unravel the psychological puzzle of her own past if she wants to get the story—and survive this homecoming. Read more and sample the audio. It starts with a simple favor. When her best friend, Emily, asks Stephanie to pick up her son Nicky after school, she happily says yes. But, when Emily doesn’t come back from her high-demand job in Manhattan, Stephanie knows something is wrong. Then, she receives shocking news. Emily is dead. The nightmare of her disappearance is over.
Or is it? Read more and sample the audio. Across the ranchlands and cities of his home state, Rory Yates’s discipline and law-enforcement skills have carried him far: from local highway patrolman to the honorable rank of Texas Ranger. He arrives in his hometown to find a horrifying crime scene and a scathing accusation: he is named a suspect in the murder of his ex-wife, Anne. Read more and sample the audio.

1. Fear: Trump in the White House by Bob Woodward, narrated by Robert Petkoff 2.The Subtle Art of Not Giving a F*ck: A Counterintuitive Approach to Living a Good Life by Mark Manson, narrated by Roger Wayne

In this generation-defining self-help guide, a superstar blogger cuts through the crap to show us how to stop trying to be “positive” all the time so that we can truly become better, happier people. With academic research and well-timed poop jokes, Manson argues that improving our lives hinges not on our ability to turn lemons into lemonade, but on learning to stomach lemons better. Read more and sample the audio. Sally Field has stunned audiences time and time again with her artistic range and emotional acuity. Yet there is one character who always remained hidden: the shy and anxious little girl within. With raw honesty and the fresh, pitch-perfect prose of a natural-born writer, Field brings readers behind-the-scenes of her life and career. Read more and sample the audio. Leif Babin and Jocko Willink, two U.S. Navy SEAL officers who led the most highly decorated special operations unit of the Iraq War, demonstrate how to apply powerful leadership principles from the battlefield to business and life. Read more and sample the audio.

5. 21 Lessons for the 21st Century by Yuval Noah Harari, narrated by Derek Perkins Yuval Noah Harari’s 21 Lessons for the 21st Century is a probing and visionary investigation into today’s most urgent issues as we move into the uncharted territory of the future. Harari addresses the challenge of navigating life in the face of constant and disorienting change and raises the important questions we need to ask ourselves in order to survive. Read more and sample the audio.