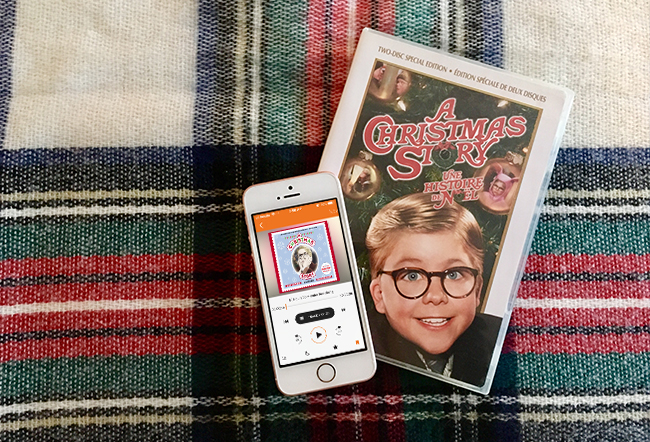 On Christmas Eve, a young boy climbs aboard a magic train filled with other children being treated to goodies while en route to the North Pole, where Santa is to offer the very first Christmas gift to one lucky passenger. This magical Christmas story is one of self-discovery that shows listeners that the wonders of life never fades for those who believe.
Read more and sample the audio.

2. How The Grinch Stole Christmas by Dr. Seuss, narrated by Walter Matthau The Grinch, whose heart is two sizes too small, hates Who-ville’s holiday celebrations, and plans to steal all the presents to prevent Christmas from coming. To his amazement, Christmas comes anyway, and the Grinch discovers the true meaning of the holiday.
Read more and sample the audio. Unable at first to find a publisher for his tale of a man named George who ponders suicide until he receives an opportunity to see what the world would be like without him, Stern originally published the story in a small pamphlet and sent it out as his Christmas card for 1943. One of those copies found its way into the hands of a producer, and the film that has become a cherished holiday tradition for many was born.
Read more and sample the audio. “Every idiot who goes about with ‘Merry Christmas’ on his lips should be boiled with his own pudding,” says Scrooge. Mean old Scrooge despises Christmas… until Christmas Eve, when a haunted voice from the past changes his life overnight.
Read more and sample the audio.

5. A Christmas Story by Jean Shepherd, narrated by Dick Cavett Ralphie Parker is in for a disappointing Christmas: he discovers his decoder ring is really an Ovaltine promotion; his parents battle over a lascivious leg lamp; the savagery of bullies is ripe; and, most crucially, Ralphie’s campaign to get a Red Ryder carbine action 200-shot range model air rifle results in the adult world saying, “You’ll shoot your eye out, kid.”
Read more and sample the audio. Luther and Nora Krank decide to skip Christmas this year. Theirs will be the only house without a rooftop Frosty; they won’t be hosting their annual Christmas bash; they aren’t even going to have a tree. Instead, they’re going on a Caribbean cruise. But, as this weary couple is about to discover, skipping Christmas brings consequences.
Read more and sample the audio. Bishop Henry Brougham wants to build a new cathedral, but doesn’t know how he’ll find an archdeacon to help fund it. But that’s not his only problem. Him and his wife, Julia, are in a passionless marriage. When the bishop prays for help, it comes in the form of Michael, who takes the position of archdeacon. With the holidays approaching, the bishop senses the attraction between Julia and Michael.
Read more and sample the audio.

8. Little Women by Louisa May Alcott, narrated by Barbara Caruso Lovely Meg, talented Jo, frail Beth, spoiled Amy: these are hard lessons of poverty and of growing up in New England during the Civil War. Through their dreams, plays, pranks, letters, illnesses, and courtships, women of all ages have become a part of this remarkable family and have felt the deep sadness when Meg leaves the circle of sisters to be married.
Read more and sample the audio.

9. Rudolph the Red-Nosed Reindeer by Robert L. May, narrated by Stephen R. Thorne Rudolph, loveable and generous, humble and good, embodies the spirit of Christmas, and reminds us of the magical possibilities that exist within us all. In the companion story, “Rudolph Shines Again,” Rudolph loses his light and is certain he is of no use to Santa now; he decides to go far away, where no one knows how bright his nose used to be. But on his journey, something magical happens.
Read more and sample the audio.