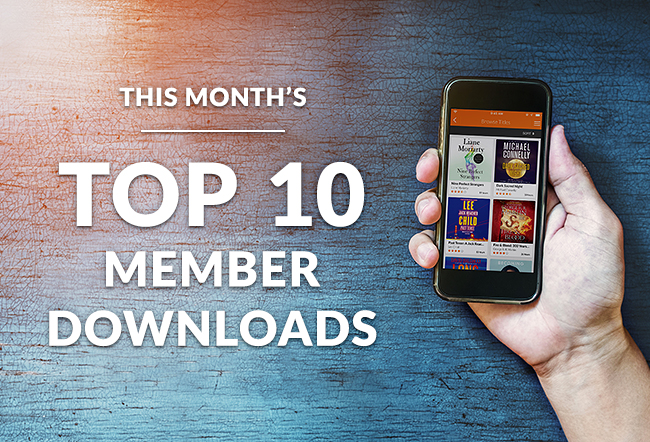 Nine people gather at a remote health resort. Some are here to lose weight, some are here to get a reboot on life, some are here for reasons they can’t even admit to themselves. They know they would have to put in some hard work, but it’s not long before every guest begins to question the pristine facade of Tranquillum House and its strange and charismatic owner.
Read more and sample the audio. Harry Bosch teams up with LAPD detective Renée Ballard to solve the case of fifteen-year-old Daisy Clayton, a runaway on the streets of Hollywood who was brutally killed. Along the way, the two detectives forge a fragile trust, but this new partnership is put to the test when the case takes an unexpected and dangerous turn.
Read more and sample the audio.

3. Past Tense: A Jack Reacher Novel by Lee Child, narrated by Scott Brick Two Canadians trying to get to New York City are stranded at a lonely motel in the middle of nowhere. Before long they’re trapped in an ominous game of life and death. Meanwhile, Jack Reacher decides to visit the town where his father was born, only to be told no one named Reacher ever lived there. As these two stories begin to entwine, the stakes rise to impossible heights for Reacher.
Read more and sample the audio.

4. Fire & Blood 300 Years Before A Game of Thrones (A Targaryen History) by George R. R. Martin, narrated by Simon Vance Centuries before the events of A Game of Thrones, House Targaryen—the only family of dragonlords to survive the Doom of Valyria—took up residence on Dragonstone. Fire & Blood begins their tale with the legendary Aegon the Conqueror, creator of the Iron Throne, and goes on to recount the generations of Targaryens who fought to hold that iconic seat, all the way up to the civil war that nearly tore their dynasty apart.
Read more and sample the audio. Ever since her twin sister was abducted by a notorious serial killer at age five, Atlee Pine has spent her life hunting down those who hurt others. When she is called in to investigate the mutilated carcass of a mule found in the Grand Canyon and its missing rider, Atlee believes it may just be the key to unraveling a rash of other similar missing persons cases in the canyon.
Read more and sample the audio. In her memoir, a work of deep reflection and mesmerizing storytelling, Michelle Obama invites readers into her world, chronicling the experiences that have shaped her—from her childhood on the South Side of Chicago to her years as an executive balancing the demands of motherhood and work, to her time spent at the world’s most famous address. Read more and sample the audio.

When we dare to lead, we stay curious and ask the right questions. We don’t see power as finite and hoard it; we know that power becomes infinite when we share it with others. We don’t avoid difficult conversations and situations; we lean into vulnerability when it’s necessary to do good work. In Dare to Lead, Brown shows us how to put those ideas into practice so we can step up and lead.
Read more and sample the audio.

Killing the SS is the epic saga of the self-styled ‘Nazi hunters.’ Among them were a French husband and wife team, an American lawyer who served in the army on D-Day, a German prosecutor who had signed an oath to the Nazi Party, and a death camp survivor. Over decades, these men and women scoured the world, tracking down the SS fugitives and bringing them to justice.
Read more and sample the audio.

4. How To Win Friends And Influence People by Dale Carnegie, narrated by Andrew Macmillan You can go after the job you want…and get it! You can take the job you have…and improve it! You can take any situation you’re in…and make it work for you! For over 60 years the rock-solid, time-tested advice in this audiobook has carried thousands of now-famous people up the ladder of success in their business and personal lives.
Read more and sample the audio. Being “shook” is more than a rap lyric for Charlamagne, it’s his mission to overcome. While it may seem like he’s ahead of the game, he is actually plagued by anxieties, such as the fear of losing his roots, the fear of being a bad dad, and the fear of being a terrible husband. Shook One chronicles his journey to beat those fears and shows a path that you too can take to overcome the anxieties that may be holding you back.
Read more and sample the audio.