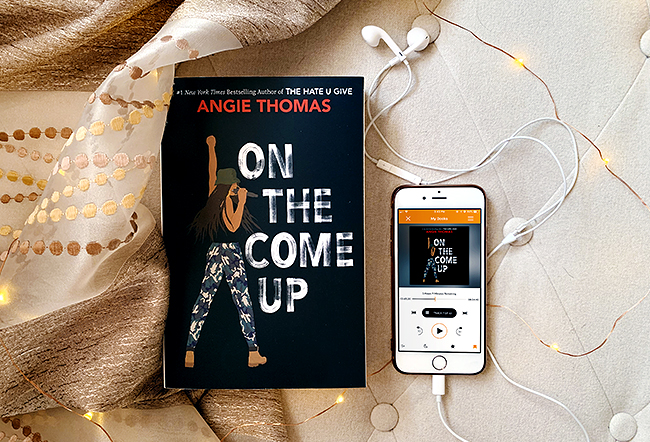 Two years ago, when I was attending a publishing program in New York City with a big group of book-minded people, one debut had made a particularly big splash. Angie Thomas’s The Hate U Give dominated conversations amongst professors and classmates alike; I simply couldn’t escape the hype around it. However, it wasn’t until my roommate left several teary Snapchat messages to me a year later praising the book to the heavens that I finally picked it up. Needless to say, I am fully on the Angie Thomas bandwagon now.

The Hate U Give was such an emotional and eye-opening book for me—and many, many others I’m sure—that it almost seems unfair that On the Come Up would have to live in the shadow of Thomas’s phenomenal debut. But, no matter how high expectations were for her follow up novel, Thomas has shattered them again. On the Come Up absolutely stands on its own, and it is already making huge ripples with Fox—the studio that brought The Hate U Give to the big screen—picking up the film rights.

On the Come Up begins after the events of The Hate U Give, with Garden Heights still reeling in the aftermath of protests and riots. Sixteen-year-old Brianna “Bri” Jackson yearns to be a rapper. She breathes flow and rhymes and dreams about her chance to break out when she should be focusing on ACT prep. Bri has lived a life marred by violence and struggles: her father, the legendary underground rapper Lawless, was murdered when she was a child; her mother, who battled addiction and has been eight years clean, just lost her job; and her brother, Trey, can only find menial work at a pizza shop despite graduating from college with honors.

Rapping for Bri is not just an avenue for honest expression, but also a way to lift her family out of poverty. When she is inspired to pen a bitter song after a particularly violent and targeted incident with a security guard at her school, Bri thinks her time in the spotlight has finally come—and it has, but not in the way she expected.

On the Come Up highlights the difficulty and frustrations of speaking the truth, your truth, in a world full of people who are bent on policing your speech. As Bri’s song goes viral, her words are twisted and used as evidence that she really is an aggressive hoodlum—an image that many around her want her to adopt.

This is a book that demands not just to be read, but also to be heard. Narrator Bahni Turpin returns with the same power and passion that she brought to The Hate U Give. Bri’s lyrics, which are already compelling on the page, are simply brought to life with Turpin’s performance. I can almost see myself standing in the garage-turned-recording studio, watching Bri speak her truths into the mic.

Thomas, who herself was a teen rapper, wrote the book for “black girls who are often made to feel as if they are somehow both too much and not enough in a world that makes wrongheaded assumptions about them.” It’s frankly remarkable that a novel so heavily entrenched in the issue of systemic racism can also be lighthearted and, at times, surprisingly funny. So, plug in your headphones, and treat yourself to a compelling, fun, and earnest story of a girl who finally gets to step into the spotlight.

Sixteen-year-old Bri wants to be one of the greatest rappers of all time. Or at least win her first battle. As the daughter of an underground hip hop legend who died right before he hit big, Bri’s got massive shoes to fill.

But it’s hard to get come up when you’re labeled a hoodlum at school, and your fridge at home is empty after your mom loses her job. So Bri pours her anger and frustration into her first song, which goes viral…for all the wrong reasons.

Bri soon finds herself at the center of a controversy, portrayed by the media as more menace than MC. But with an eviction notice staring her family down, Bri doesn’t just want to make it—she has to. Even if it means becoming the very thing the public has made her out to be.