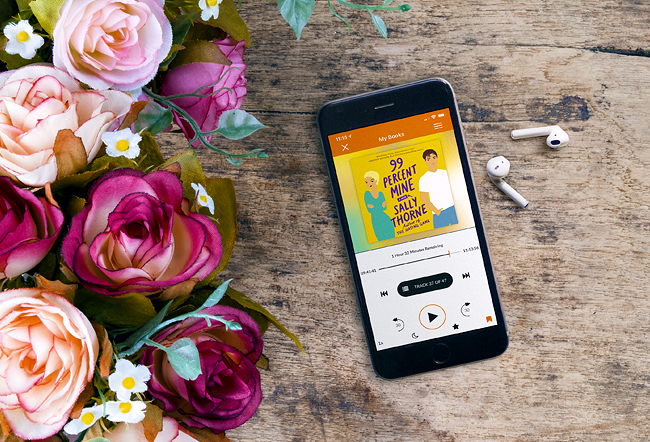 I love romantic comedy novels. Much like their movie counterparts, some people are snobby about them. But I love them. Why? Because they are comforting, and in a world that is always busy, and often scary, romantic comedies bring us escapism, passion, and most of all, a ton of fun

Obviously, I’m not alone here. We at Audiobooks.com have noticed a surge in the number of rom-com titles, and no wonder! In 2018 we saw a big trend in movies and TV bringing back the rom-com in a big way (Crazy Rich Asians, Mamma Mia 2, To All the Boys I’ve Loved Before), and so it makes complete sense we’d this in the audiobook world too

sit back, get a bar of chocolate (or whatever your comfort food is), and stick on a few of these listens.

1. 99 Percent Mine by Sally Thorne, narrated by Jayme Mattler

In the same vein as her last book (The Hating Game), Sally Thorne brings us a fun romantic comedy about a twin sister and brother fighting over an inheritance, and the sexy best friend who comes between them. Darcy, the main character of the book, has a massive crush on her brother’s best friend—who has always been off limits for her…until now. Now tasked with renovating and selling her grandmother’s house, Darcy has to concentrate on figuring out how to protect her inheritance, while also trying to figure out how to seduce her brother’s best friend. 99 Percent Mine brings lots of laughs, and Jayme Mattler‘s narration really brings Darcy—and her feisty attitude—to life.

2. The Corner Shop in Cockleberry Bay by Nicola May, narrated by Penny Scott Andrews

Have you ever felt like giving up everything, and moving to the middle of nowhere? Rosa inherits a near-derelict shop in a quiet English village from an anonymous benefactor. She plans to sell it, but there’s a condition to ownership: she cannot sell the shop. So she either has to make a go of or give it away. So, Rosa decides to stay and run the shop, and much hilarity ensues! Add in a rugby player, a sexy plumber, and Rosa’s hilariously-named dachshund, Hot, and you’ve got a side-splitting combination!

Did you love the movie You’ve Got Mail? If you did, or if you love a good opposites attract-type romance, you’ll love Accidental Tryst. Two strangers mistakenly switch phones at an airport. Trystan is a rich workaholic with an attitude. Emmy is a caring, sweet, free-spirited southern girl. On paper, it shouldn’t work…but it does! The fun and witty banter intensified by John Lane and Cassandra York’s amazing narrations, which bring this novel to life.

One of the great things about modern rom-com novels is the fact that the heroines are multifaceted characters. They have varied jobs and roles they fill and aren’t just two-dimensional traditional heroines. In this audiobook, Millie Morris is a professor who’s “perma-single.” She and her male best friends/colleagues make a pact to start online dating. However, straight after making the pact, Millie and her best friend, Reid, have a one night stand, which makes things awkward, so they agree to just stay friends.

5. The Kiss Quotient by Helen Hoang, narrated by Carly Robins.

This is SUCH a cool listen. The heroine, Stella Lane, works in a well-paid, technical job, making algorithms that predict customer purchases. However, her social life is not as successful as her professional life. Helen finds it hard to be in relationships, which she attributes to being on the spectrum, as well as a lack of romantic experience. So she comes up with the idea of hiring an escort to get “experience with a professional.” This hilarious read can get pretty steamy, but it’s a great read from a unique perspective and a neurodiverse author.

New to Audiobooks.com? Get a free audiobook when you sign up for our free trial. Digital audiobooks make audible stories come to life when you’re commuting, working out, cleaning, cooking and more! Listening is easy with our top-rated free audiobook apps for iOS and Android, which let you download & listen to bestselling audiobooks on the go, wherever you are. Click here to get your free audiobook!