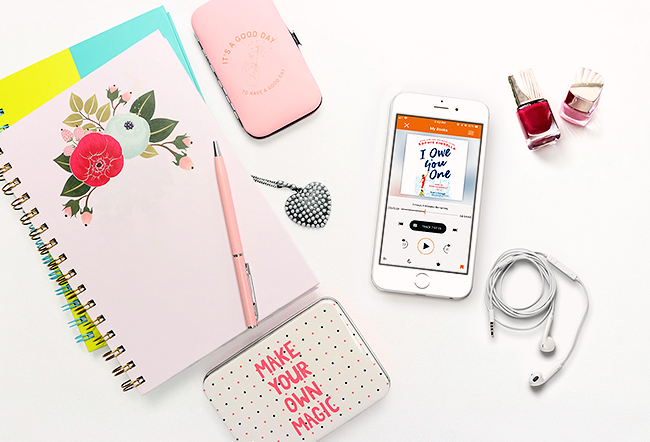 I don’t know about you, but I feel like winter has been going on forever. I don’t remember what it feels like to not wear winter boots, shovel snow, or slip around on ice. While I’m lucky enough to live somewhere with lovely sunny (but cold) days in the winter, it’s still a season that gets a lot of people down. Add to that all of the economic and political uncertainty in the world, and sometimes you just need a bit of positivity! So why not combat that with some sunny and happy listens? Enter UpLit!

What is “UpLit”? UpLit is a term for novels that are inspiring and focus on empathy, human spirit, and friendship. They are very much set in the real world and may even deal with sad situations, but they have an element of optimism, and most importantly, they end on a high. If the book leaves you with a warm and fuzzy feeling after you read it, chances are you just read some UpLit.

Here are some of our top UpLit titles that we know you’ll love! For more suggestions, check out our book list!

Super organized but frazzled mum Alice likes to think she is always on top of everything, but is she really? After a fair amount of cajoling, she finally agrees to her sister Melissa’s advice to take a break.

Hoping her sister will book a fancy spa, Alice soon discovers that this is NOT what her sister has planned. She ends up in Denmark, at a “How to be a Viking” getaway.

As Alice learns to forage for food, takes up sword fighting, and builds boats, she also learns a lot about herself, her relationship with Melissa, and starts to realize that there are a lot of changes she needs to make in her life.

This is a fun and hilarious listen, definitely emphasized by Juliet Burton’s enthusiastic narration. It’s also a lovely story of a relationship between two very different sisters.

Frazzled mum Alice Ray likes to think she’s on top everything—she has FOUR bags-for-life in the boot of her car for heaven’s sake. But after spectacularly embarrassing herself at work, she finally gives in to her sister’s pleas to take a much-needed break.

But this is not the luxury spa holiday Alice hoped for—instead, she finds herself in Denmark, in the middle of nowhere, on a ‘How to be a Viking’ getaway.

Can the two sisters finally learn to get along or will learning to embrace their inner warrior just make them better at fighting? Two sisters. One Scandi holiday they’ll never forget…

If you like to listen to books that make you cry, you’ll love this. I was drawn to it because I love horses, and this is as much a story about horses as it is a story about friendship.

Both Sarah and Faith are escaping unhappy situations. When Faith is tasked with taking Sarah on a trip to help her recover from her mother’s death, Sarah begs her to take her to see Midnight, the horse that was once hers.

Together, the two women learn to come to terms with the people and situations that have damaged them.

No longer tolerating her husband’s borderline abuse, Faith escapes to her parents’ California beach house to plan her next move. She never dreamed her new chapter would involve befriending Sarah, a fourteen-year-old on the run from her father and reeling from her mother’s sudden and suspicious death.

While Sarah’s grandmother scrambles to get custody, Faith is charged with spiriting the girl away on a journey that will restore her hope: Sarah implores Faith to take her to Falkner’s Midnight Sun, the prized black mare that her father sold out from under her. Sarah shares an unbreakable bond with Midnight and can’t bear to be apart from her. Throughout the sweltering summer, as they follow Midnight from show to show, Sarah comes to terms with what she witnessed on the terrible night her mother died.

But the journey is far from over. Faith must learn the value of trusting her instincts—and realize that the key to her future, and Sarah’s, is in her hands.

The M Word by Eileen Wharton, narrated by Julia Franklin

Feel-good novels almost always seem to center around younger women, so it’s awesome to hear a story about a slightly older woman.

Roberta Gallbreath is middle-aged and menopausal. She hates a lot of people—mostly her kids, her ex-husband, and the majority of people she works with.

When her mother dies, Roberta reads some of her mother’s old letters and discovers information regarding her heritage. Based on this new information, Roberta decides that she needs to start becoming a better person.

This is a great self-discovery tale with a lot of humor! Julia Franklin adds so much character to Roberta and her family that you cannot help but laugh out loud!

Roberta Gallbreath is middle-aged and menopausal. She dislikes her children, detests her ex-husband and despises her colleagues.

When her mother dies, Roberta is left with a pile of letters and a mystery surrounding her son. The letters reveal Roberta’s heritage is not what it seems and she is soon on a mission to become a better person.

Told with humour and emotion, this is the tale of one woman’s journey to find out where she came from. As she looks to the past for answers, more questions are raised. Will Roberta discover who she really is?

I Owe You One by Sophie Kinsella, narrated by Fiona Hardingham

I love, love, love, love, love Sophie Kinsella. I really do. I would say all of her books could be included in this blog post. She is the queen of UpLit! Two of my favourites are Remember Me? and My Not So Perfect Life, which both made me laugh out loud, and were a welcome breather from the two suspense listens that I had going on.

In I Owe You One, Fixie Farr, the aptly named main character, is that friend we all have who tries to fix other people’s problems. When she meets Sebastian in a coffee shop, he asks her to watch his laptop. She does so, and ends up saving it from disaster. To thank her, Seb scribbles an IOU on a business card, and thus begins a flurry of IOUs (and crazy situations) back and forth from Fixie to Seb, and vice versa.

The uplifting narration from long-term Kinsella narrator Fiona Hardingham is wonderful as always. She’s 100% the best narrator for an UpLit novel.

Fixie Farr can’t help herself. Straightening a crooked object, removing a barely-there stain, helping out a friend…she just has to put things right. It’s how she got her nickname, after all.

So when a handsome stranger in a coffee shop asks her to watch his laptop for a moment, Fixie not only agrees, she ends up saving it from certain disaster. To thank her, the computer’s owner, Sebastian, scribbles her an IOU—but of course Fixie never intends to call in the favour.

That is, until her teenage crush, Ryan, comes back into her life and needs her help—and Fixie turns to Seb. But things don’t go according to plan, and now Fixie owes Seb: big time.

Soon the pair are caught up in a series of IOUs—from small favours to life-changing debts—and Fixie is torn between the past she’s used to and the future she deserves.

Does she have the courage to fix things for herself and fight for the life, and love, she really wants?

When you have kids, you get into a routine, and oftentimes, it means you lose touch with friends. Sometimes because they are in different stages of life than you, other times it’s just exhaustion!

Beth, Sarah and Marie have busy lives, but make the effort to meet up once a month for a couples dinner. It’s always fun and laid back—until Simon, a last-minute guest, is invited to a dinner. As Simon becomes involved in the group, the relationships between the friends and their husbands start to unravel…

Beth, Sarah and Marie have been friends forever. Now they are grown up, with busy lives, busy husbands, busy kids…but they still find time to meet up over dinner once a month. A cosy, comfortable gathering of happy couples—or so they thought.

Until one night, someone brings along a last-minute guest whose wife has just left him. Simon is standing on the doorstep in floods of tears. While the women do their best to console him, their husbands feel the need to mark their territory.

And as Simon becomes more involved with the group, his presence changes everything these three couples thought they knew about each other, leading to a final dinner party that no-one will ever forget.