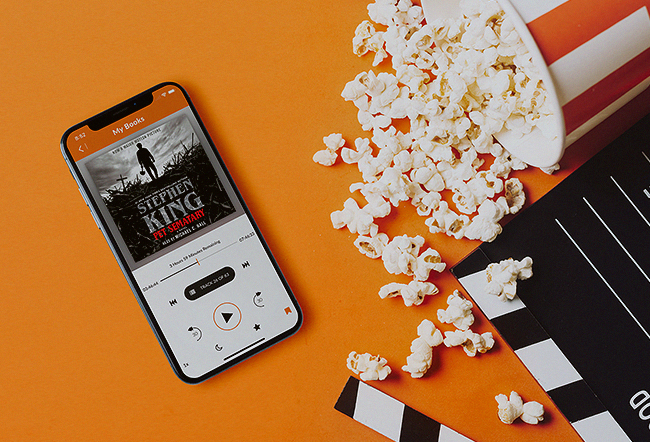 Thinking of going to see a movie this April? Get the best experience by listening to the books they were based on before seeing the film & TV adaptations.

When Dr. Louis Creed (Jason Clarke) takes a new job and moves his family to Ludlow, Maine, this new beginning seems too good to be true. There’s an undercurrent of danger that lingers…like the graveyard in the woods near the Creed’s home, where generations of children have buried their beloved pets. Behind the “pet sematary,” there is another burial ground, one that lures people to it with seductive promises and temptations. A blood-chilling truth is hidden there—proving to the Creeds that sometimes, dead is better. After you listen the novel you’ll be yearning to see the film on the big screen.

The Best of Enemies: Race and Redemption in the New South by Osha Gray Davidson, narrated by Keith Sellon-Wright
Expected Release Date: April 5

Rich with details about the rhythms of daily life in the mid-twentieth-century South, The Best of Enemies (released on Amazon this April) offers a vivid portrait of a relationship that defied all odds. By placing this very personal story into a broader context, Osha Gray Davidson demonstrates race is intimately tied to issues of class and that cooperation is possible—even in the most divisive situations— when people begin to listen to one another.

Crime drama Quicksand is coming to Netflix on April 5th, and is based on the 2016 novel of the same name. A mass shooting has taken place at a prep school in Stockholm’s wealthiest suburb. Maja Norberg (Hanna ) has just spent nine horrible months in jail and is now on trial for her involvement in the massacre where her boyfriend and best friend were killed. The time has come for her to enter the courtroom.

Right from the start, Bigger Thomas (Ashton Sanders) had been headed for jail. It could have been for assault or petty larceny; by chance, it was for murder and rape. Native Son tells the story of this young black man caught in a downward spiral after he kills a young white woman in a brief moment of panic. Wright’s powerful novel—set in the 1930s—is an unsparing reflection on the poverty and feelings of hopelessness experienced by people in inner cities across the country. The film adaptation is set to debut on HBO Films on April 6.

Could this be love for Tessa (Josephine Langford) and Hardin (Hero Fiennes-Tiffin)? Soon to be a major motion picture, Anna Todd‘s sensational novel is now available with a bonus chapter read by Hero Fiennes Tiffin and a letter to listeners read by the author.

Tessa is the good girl with a sweet, reliable boyfriend back home. Hardin is the bad boy with tattoos and a bad attitude. Hardin is the polar opposite of her sweet boyfriend back home. He is mean and rude, but as soon as they kiss, it ignites a passion within her she’s never known until now. Each time he pushes her away, she only feels pulled in deeper by her desire to find the real Hardin beneath his lies.

From the beloved blogger turned voice of an online generation an unforgettable and hilarious memoir-meets-manifesto exploring what it means to be a millennial gay man living with cerebral palsy. Ryan shares his story of how, through extensive trial and error, he figures out how to take his life from bleak to chic.

The TV adaptation called Special will be released on Netflix April 12 and there will be eight episodes in total for Season 1.

The Breakthrough: The Miraculous True Story of a Mother’s Faith and Her Child’s Resurrection by Joyce Smith, narrated by Elisabeth Rodgers
Expected Release Date: April 17

Coming to a theater near you on April 17, Breakthrough is the impossible true story about the powerful impact of prayer starring Chrissy Metz, Topher Grace, Dennis Haysbert, and Josh Lucas.

When Joyce Smith’s fourteen-year-old son, John, fell through an icy lake, he lay lifeless at the hospital for more than sixty minutes. But Joyce was not ready to give up on her son. She gathered all her faith and strength and cried out to God to save him. This is an extraordinary story of the death and resurrection of the Smith’s son.

Winter is coming. Who will win the battle, fire or ice? The long anticipated wait is almost over for season eight of Game of Thrones. While you wait for the show to return to HBO, you can make the wait more enjoyable by listening to Games of Thrones: A Song of Ice and Fire (Book One) to set the mood for what is about to come.

Did you see the Original Netflix series Selection Day last year? If you did, we have good news for you: part 2 of the show is finally arriving this month! It’s a brilliant novel about two brothers in a Mumbai slum who are raised by their obsessive father to become cricket stars, and whose coming of age threatens their relationship, future, and sense of themselves. Many fans can’t wait to see how the story of the Kumar brothers concludes.