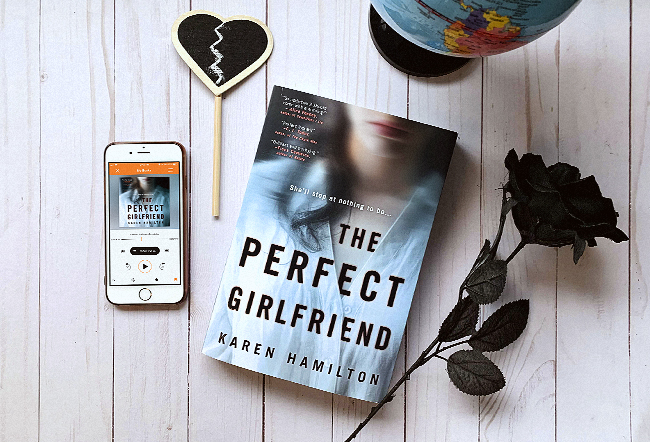 It’s funny how the genre of a novel can change the connotations of the title. If this was a cozy mystery, or a romance novel, I feel like The Perfect Girlfriend would be a delightful little tome involving baking and kittens. However, since this Karen Hamilton novel is a suspense-filled thriller, we know that there will probably not be a bunch of cozy cake puns.

In this novel, we meet Juliette. She talks at length about Nate, who we very quickly discover is not her current boyfriend, but her ex. While Juliette sees their relationship as being the great love of her life, Nate doesn’t feel that way, and requests “space.” Juliette develops one single purpose – to get Nate back by becoming a perfect match for him. She still has a key to his apartment, so she lets herself in and tidies up, leaves wine on the table, and moves things around. He’s a pilot, so she becomes a flight attendant on his airline, and begins befriending his coworkers. She also bugs his phone, monitors his movements, and reads his personal emails. A little extreme, methinks.

Karen Hamilton does a great job of making Juliette build up from someone who’s dealing badly with a break-up at the beginning, to an obsessively delusional person by the end, so it’s only partway through that you begin to think “oh, wait, this is madness.” Also, Nate and his friends and family are not particularly endearing characters either, so it’s hard to feel much sympathy for him, even when he’s experiencing the extreme consequences of Juliette’s obsessions.

Without giving anything away, (because I don’t want to spoil any of the twists and turns) there are two really cool ways in which the author gets you invested in Juliette’s story. The first is how you get facts about her background (is Juliette who she says she is? Is she even called Juliette?), so you repeatedly feel sorry for her, then angry with her, then sorry for her again. We don’t know if these are true, but they give us some idea of how she views herself. The second narrative device Hamilton employs is using the supporting characters’ perceptions of Juliette to help you understand who she really is. Juliette is such an unreliable narrator that you cannot trust anything she says, so it’s nice to have these moments of clarity through the eyes of others.

Anne Marie Lee’s narration is perfect for this book. I imagined that to manipulate so many people, Juliette would have to sound unassuming and calm, both of which are qualities that Lee brings to this listen.

If you’re a fan of thrillers with lots of twists and turns, this is definitely the listen for you!

Publisher Summary:
YOU’VE NEVER READ A LOVE STORY AS TWISTED AS THIS.
Juliette loves Nate.
She will follow him anywhere. She’s even become a flight attendant for his airline, so she can keep a closer eye on him.
They are meant to be.
The fact that Nate broke up with her six months ago means nothing. Because Juliette has a plan to win him back.
She is the perfect girlfriend. And she’ll make sure no one stops her from getting exactly what she wants.
True love hurts, but Juliette knows it’s worth all the pain…