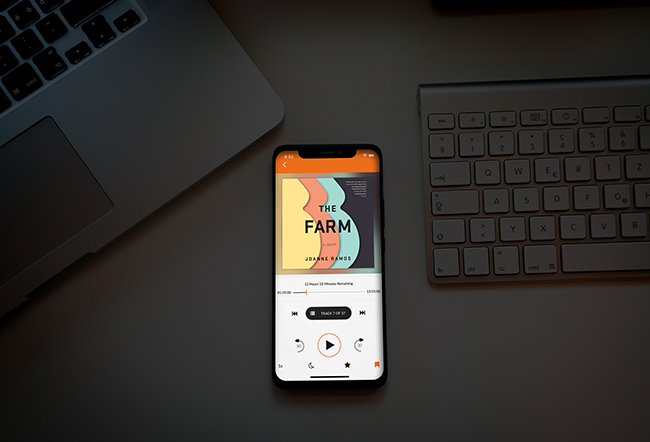 Are you as obsessed with Black Mirror as I am? There’s something so fascinating about seeing what could happen in our not-so-distant future – especially when technology takes a dark turn. Maybe it’s morbid curiosity or just simply self-preservation. Either way, if you binge-watched the latest season way too quickly like I did and you’re looking to fill that void, these audiobooks will do just that!

From virtual reality utopias to artificial intelligence, each one of these reads could easily find its place in a season of Black Mirror. Click here to check out our full ‘For Fans of Black Mirror’ book list.

The Test by Sylvain Neuvel, narrated by Neil Shah

The Test starts out with the seemingly normal story of Idir, a new immigrant, arriving to take the British Citizenship test so that he and his family can call Britain home. Things take an extremely unexpected turn, which rockets Idir into a situation where the choices he makes could change his entire life and potentially the lives of others.

Without giving too much away, The Test echoes the “Black Mirror vibe” with its use of tech coupled with government control. We’ve likened it to Black Mirror’s “Fifteen Million Merits,” since both explore how far someone is willing to go for those who they love and in hopes of a new life.

The Farm by Joanne Ramos, narrated by Fran De Leon

Can you really put a price on what a life is worth? In Joanne Ramos’, The Farm, it turns out, you can. At The Farm, you get paid a pretty penny, but for nine months you’re cut off from your normal life, so that you can produce the perfect baby. This is where Jane, an immigrant from the Philippines, ends up – desperate to turn her life around.

With a synopsis like this, it’s hard not to think that this story comes right from the Black Mirror universe. In the episode “Playtest” we follow Cooper who is looking to make some extra cash, but is placed in an extreme situation that turns ugly. Again, both “Playtest” and The Farm hearken back to the idea of how far people will go for money and in pursuit of a better future.

Ready Player One by Ernest Cline, narrated by Wil Wheaton

Although already adapted into a major motion picture, directed by Spielberg no less, Ready Player One is something right out of an episode of Black Mirror. In a dystopian future there is a virtual reality program called the OASIS, where most people go all day to escape reality. It is there that Wade Watts’ story unfolds and he gets a little more than he bargained for.

While it’s not exactly the same fast-paced tale of good vs. evil, Black Mirror’s “San Junipero,” has obvious similarities. In this episode there is a virtual reality world called San Junipero that is based on nostalgia where the elderly can visit freely and can remain after they die. In this world, the people are able to do things that they wouldn’t normally be able to do in real life, mirroring Ready Player One’s OASIS.

The Circle by Dave Eggers, narrated by Dion Graham

The Circle, now a major motion picture starring Tom Hanks and Emma Watson, tells the story of Mae who gets hired at a hugely influential company, which is on the cutting edge of technology. The social media accounts that are associated with said company eventually evolve into something that toys with the notion of transparency and the limits of human knowledge.

Much like The Circle, Black Mirror’s “Arkangel” and “The Entire History of You” show us a world where technology has infiltrated our society and our lives, and how sometimes the best intentions may not have the best consequences in the end.

In Marr’s, The One, we are dropped into a world where a company named Match Your DNA has been finding people’s soulmates for the last decade. The One zeroes in on five people who are about to be “Matched” and explores how not everyone is destined for a “happily ever after.”

In the same vein as The One, Black Mirror’s “Hang the DJ” episode is set in a place called The System, where “Coach,” a Siri-like matchmaker, matches people with a series of different love interests for varying lengths of time with the end goal of finding their ultimate match. Technology meddling in people’s love lives, what could possibly go wrong? Both The One and “Hang the DJ” confront this question head on.

Machines Like Me by Ian McEwan, narrated by Steven Crossley

In McEwan’s Machines Like Me, we are presented with an alternative London, where artificial intelligence has advanced so much that the public are now able to purchase synthetic humans. We meet Charlie who has come into money and buys Adam, one of the first of these synthetic humans. After designing and programming Adam with a personality, the question of what it means to be human arises as does a love triangle that leaves Charlie in a moral dilemma.

Enter Black Mirror’s “Be Right Back” where Martha loses her partner and utilizes a new technology that allows people to communicate with the deceased. Without giving away major plot points, this episode also explores where the line should be drawn when it comes to artificial intelligence and the human condition.