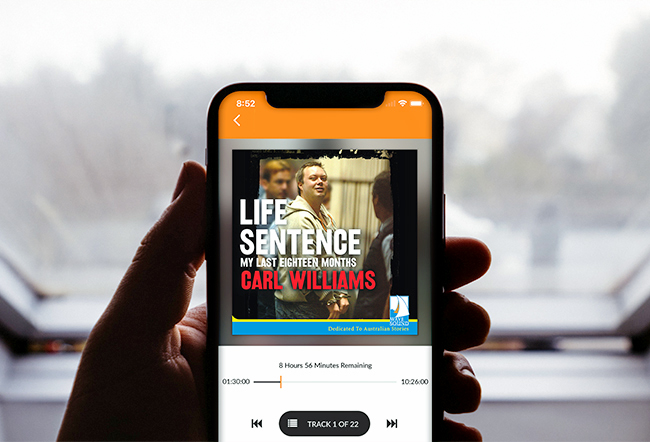 In 2007, Melbourne gangland kingpin Carl Williams was convicted of three murders and was sentenced to 35 years’ jail time. While he served his sentence he spent most of his time in his small cell, but was given access to a laptop computer. In 2010, Williams was murdered by a fellow inmate. Following this, his laptop was confiscated and they found countless letters addressed to his friends and family spanning the last eighteen months of his life.

Life Sentence, Williams’ memoir, allows you to hear Williams’ inner thoughts by listening to the intimate letters he had written daily to his loved ones.

Taking on the job of narrating personal letters like the ones in Life Sentence can’t be an easy feat. We had the chance to chat with Tim Carroll, the narrator for Life Sentence, and pick his brain on how narrating this memoir differs from his other projects.

Audiobooks.com: How did you prepare before sitting down to begin narrating Life Sentence?

Tim: Well actually, there was particularly a lot of preparation required before recording this book as many of the transcribed letters contained typos or missing words. On paper this is easier for the reader to decipher but in audio it would make for a very confusing listen if I included the typos or didn’t attempt to fill in the missing words. So we had to adapt the text slightly so it made sense to the listener. As the person embodying Carl Williams’ character and voicing his flow of thought, I was asked to make the initial suggested adaptations, working of course with the audio publisher and the print publisher, and had to make sure to stay as true to Carl’s words as possible. The process was of enormous value in discovering an empathy for Carl’s characters, and understanding of his circumstances and what I very strongly felt was his motivation and purpose for the letters he had written.

Audiobooks.com: What was the most challenging part of narrating Life Sentence?

Tim: The most challenging part was perhaps…capturing Carl’s humanity, his sense of humor, his fear, his anxiety, and of course, his bravado….in a way that I hope he would be happy with.

Audiobooks.com: What was your biggest take-away from narrating Carl’s letters?

Tim: Good question…regardless of the crimes Carl had been charged with, Carl was also just an every day knock about bloke who was likable in many ways. With the intimacy of reading his letters…I felt a genuine responsibility to convey his love for his daughter and step-children, for his parents, and of course for Roberta. I have tried my best to capture what I believe to be the truth and intention of his words.

Audiobooks.com: What vocal techniques did you have to develop and hone while narrating this book?

Tim: It was a little tricky switching between the essence of the character of Carl, and then the more neutral tone required for the factual and informative pieces of narration, which are interspersed throughout the performance.

Audiobooks.com: How did narrating Life Sentence differ from other narrations you’ve done in the past?

Tim: Well, the fact that Carl is (was) a real person…and that these are his actual words, which were more than likely never intended to be read by anyone other than their original recipients, kind of presented me with… a very serious responsibility to be truthful and real, in my performance but also respectfully dignified to Carl…and especially to his loved ones. I took that obligation extremely seriously, and believe it or not, I felt almost a sense of his presence, in regard to portraying and presenting his intimate thoughts and private words, in such a public fashion.