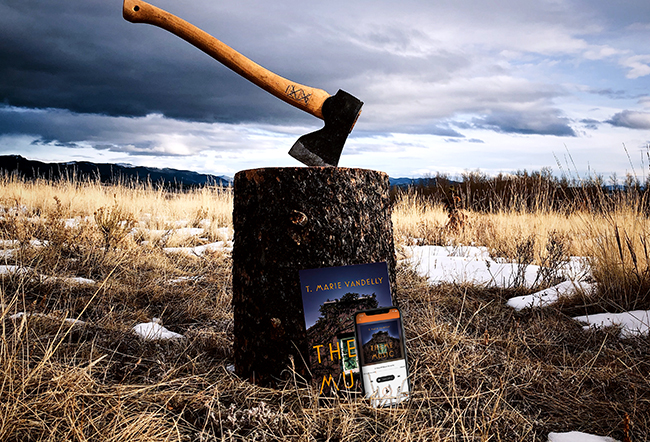 Dixie, when I let you go
Thought you’d realize that I would know
I would show
The special love I have for you
My baby blue…

Upon first reading the synopsis for Theme Music I immediately thought of The Amityville Horror and it definitely had a similar feeling to it with a mysterious family murder and a ghostly presence in the place where it all began. What set Theme Music apart for me was the unique twists and turns that the story took. From horror to psychological thriller to family drama – this fast-paced listen kept me hooked all the way through.

When Dixie Wheeler was just a baby her father murdered her entire family on Thanksgiving day. A neighbor found her, the only survivor, in her high chair while Baby Blue by Badfinger echoed through the empty house. Thus, Dixie’s nickname Baby Blue was born and the Wheeler murders became something of a local legend.

After being raised by her aunt and uncle, 25 years later Dixie wants answers about what happened that day. Dixie moves into her family home where her life was forever changed and now, she must come face to face with the ghosts of her past…which seem a little too real. Once people start to turn up dead around her, she wonders how real those ghosts actually are.

I must warn you, if you do plan to embark on this twisty tale, there is a fair bit of gore – especially right off the bat. But the way that T. Marie Vandelly describes the macabre really sets the scene and allows you to immerse yourself in the story. Since Dixie was only a baby when the murders took place, she can only recount that day from what she’s read in newspapers and heard from rumors and gossip from people around town. In a way, the reader is in the same position as Dixie – we see everything through Dixie’s eyes and we learn everything she learns about what happened that day. This makes every twist that much more suspenseful! I’m telling you, I couldn’t listen to this audiobook fast enough – I had to know what would happen next!

Theme Music was narrated by Sarah Mollo-Christensen, an Audie-nominated narrator who has lent her voice to over 70 audiobooks on Audiobooks.com. Sarah’s portrayal of Dixie expertly mixed Dixie’s dark humor and uneasiness, which allowed me to connect with her character that much more.

Ghost story? Check. Psychological thriller? Check. Crime fiction? Check. If you’re looking for a new listen that’s packed with all of the goodness listed above, then you’ll definitely want to give T. Marie Vandelly‘s debut novel, Theme Music a listen.

She didn’t run from her dark past. She moved in.

For the lucky among us, life is what you make of it; but for Dixie Wheeler, the theme music for her story was chosen by another long ago, on the day her father butchered her mother and brothers and then slashed a knife across his own throat. Only one-year-old Dixie was spared, becoming infamously known as Baby Blue for the song left playing in the aftermath of the slaughter.

Twenty-five years later, Dixie is still desperate for a connection to the family she can’t remember. So when her childhood home goes up for sale, Dixie sets aside all reason and moves in. But as the ghosts of her family seemingly begin to take up residence in the house that was once theirs, Dixie starts to question her own sanity and wonders if the evil force menacing her is that of her father or a demon of her own making.

In order to make sense of her present, Dixie becomes determined to unravel the truth of her past and seeks out the detective who originally investigated the murders. But the more she learns, the more she opens up the uncomfortable possibility that the sins of her father may belong to another. As bodies begin to pile up around her, Dixie must find a way to expose the lunacy behind her family’s massacre to save her few loved ones that are still alive—and whatever scrap of sanity she has left...