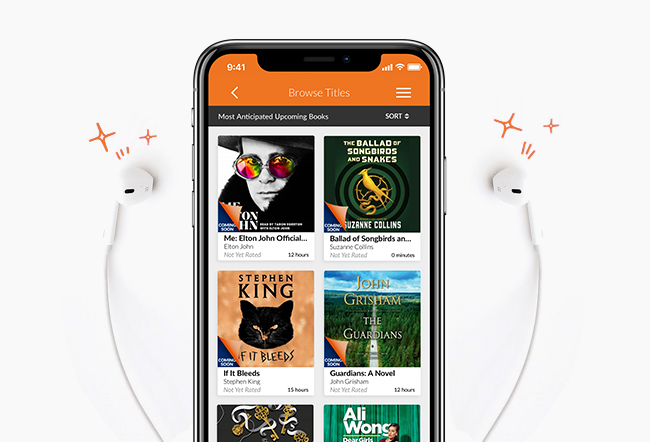 Getting way too excited for an upcoming audiobook release is something we are all too familiar with here at Audiobooks.com. Now, you can join in on our excitement with the all-new “Most Anticipated” feature!

With this new feature you can add any of these titles to your Wishlist or, if you don’t have an account with us, simply select “Let me know when available” and enter your email address. You will then be notified when this title is available for your listening pleasure!

We’ve rounded up some highly anticipated listens that are due to be released in the coming months, from sequels to thrillers to heartfelt memoirs that you’ll definitely want to be notified about. Click here to view our full ‘Most Anticipated Upcoming Books’ book list.

This highly anticipated first and only official autobiography from pop sensation, Elton John, is getting major buzz. In Me, John dives into his past, his rise to fame, and how he got to where he is today. The audiobook is narrated by John himself as well as Taron Egerton who portrays John in the recently released biopic, Rocketman.

Advance praise for Olive, Again has landed this upcoming audiobook on the radar of some major publications where it has been named as one of the most anticipated books this fall. Following Elizabeth Strout’s Pulitzer Prize-winning novel, Olive Kitteridge, Olive, Again, gives us more from the character that captured the attention of millions. Follow Olive as she tries to not just figure out her own life, but the lives of others in her town of Crosby, Maine.

If you are one of the lucky ones who got lost in Erin Morgenstern’s fantastical bestseller The Night Circus and loved every minute of it, then hold on to your hats because she’s back with another immersive listen, The Starless Sea. In this upcoming release, we follow Zachary Ezra Rawlins as he discovers a magical realm beneath the world. As he uncovers more about this mysterious world, he also begins to unravel the mysteries of his own life.

Fifty years ago, Michael Crichton released The Andromeda Strain, which not only made him a household name, but also spawned the creation of a new genre, the technothriller. Now, Daniel H. Wilson helps to keep this relevant and resonant story going with the follow-up, The Andromeda Evolution. You’ll definitely want to be among the first to know when this audiobook is out.

The Ballad of Songbirds and Snakes by Suzanne Collins, narrated by TBD
Expected release: May 2020

After almost a decade since Mockingjay, the final of the Hunger Games series, was released, Suzanne Collins has announced that she will be releasing a prequel titled The Ballad of Songbirds and Snakes. This new addition to the series will revisit the world of Panem sixty-four years before the events of The Hunger Games, starting on the morning of the reaping of the tenth Hunger Games.

If It Bleeds by Stephen King, narrated by TBD
Expected release: May 2020

How does he do it? Stephen King just released The Institute in September of 2019 and he has already announced his next release! If It Bleeds will be a collection of novellas: Mr. Harrigan’s Phone, The Life of Chuck, Rat, and the title story If It Bleeds. Dubbed as master of short fiction and the king of horror, this one is bound to be a chilling listen.