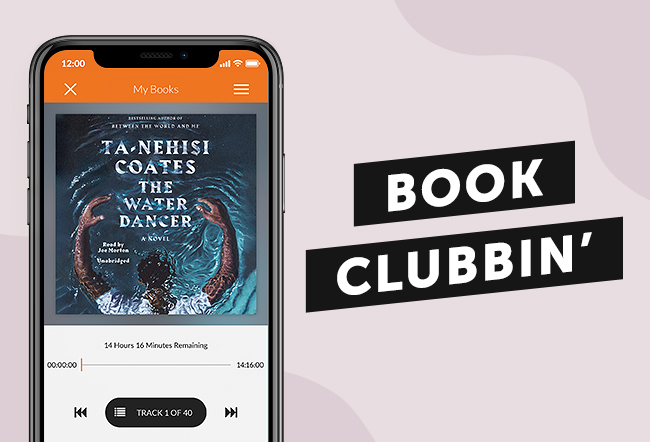 Sometimes life can get so hectic that you’re lucky if you find time to shower let alone read your book club book in time. If your New Years’ resolution is to read more but you can’t find the time, audiobooks are the answer! You can press play on this month’s pick during your commute or while you’re cooking dinner and before you know it, you’ll have knocked out those pages in no time!

February’s pick is The Water Dancer by Ta-Nehisi Coates, narrated by Joe Morton. The novel is Coates’ first foray into fiction, whose bibliography also includes the acclaimed memoir Between the World and Me. Not only was The Water Dancer chosen for Oprah’s Book Club revival, but it also debuted at the top of the New York Times Fiction Best Seller list. Coates began writing the novel around 2008 and 2009 when he was doing extensive research on slavery and the Civil War. Set on a struggling tobacco plantation in Virginia, The Water Dancer follows Hiram Walker, a young mixed-race boy born into slavery who discovers he possesses a superhuman ability when he falls into a river.

You definitely don’t want to miss this striking debut novel. Check out our discussion questions below, but beware — SPOILERS ahead.

1) Is the story buoyed by only having Hiram’s point-of-view, or did you feel it was lacking in opportunity and diversity by excluding other characters’ voices?

2) Why do you think Coates decided to write The Water Dancer through the lens of magic realism? What did the addition of his characters’ extraordinary abilities allow Coates to explore and interrogate that he couldn’t have done if the novel wasn’t embellished with magic?

3) Memory is a key theme in the novel. What is Coates suggesting by making the power of Conduction directly tied to memories and the act of remembering? What is the significance of Hiram being unable to recall certain memories?

“At every gathering there was this dispute about my mother’s mother, Santi Bess, and her fate. The myth held that she had executed the largest escape of tasking folk—forty-eight souls—ever recorded in the annals of Elm County. And it was not simply that they had escaped but where they’d been said to escape to—Africa. It was said that Santi had simply led them down to the river Goose, walked in, and reemerged on the other side of the sea.”

Discuss the significance of River Goose which for some, such as Maynard, is a symbol of danger and death, while for others, like Hiram and Santi Bess, is a symbol of resistance and freedom.

5) How did you feel about the inclusion of a real historical figure such as Harriet Tubman in the story? What impact did it have?

6) Why do you think Coates chose to set The Water Dancer predominantly on a declining tobacco plant? How does Coates juxtapose the trajectory of Lockless to the plights of Hiram and the Underground?

7) Coates often wrestles with how the war against injustice should be waged. When Corrine Quinn and Hawkins plan to take down Georgie Parks, Hiram reminds us that even Georgie was forced into his exploits by circumstance. To what extent is revenge or punishment just when each character is trapped in one way or another?

8) Discuss the complexities of motherhood and fatherhood in the novel and the many forms of “family” we encounter. How does slavery corrupt families? How does Hiram come to define family by the end?

9) Consider the experiences of enslaved women versus enslaved men. How does Coates convey tensions between black characters along gender lines? How does it impact Hiram and Sophia’s relationship over time?

10) Is there any part of the book that you wish had been written differently?