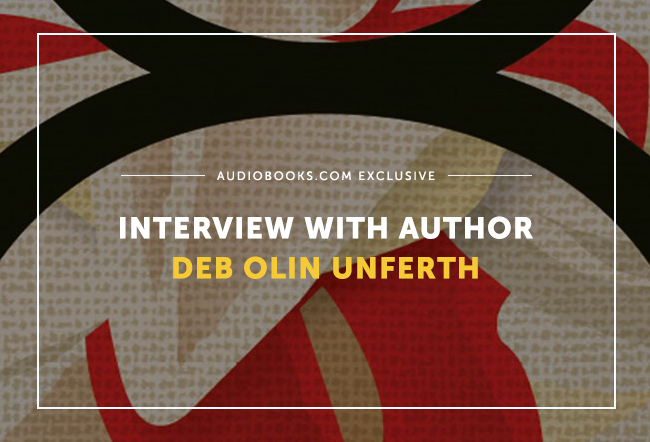 Have you ever sat on a beach in deep thought about the mysterious lives of chickens and what will come of them in the future? Deb Olin Unferth, author of Barn 8, certainly has. Best known for her novel Vacation and her recent collection of stories, Wait Till You See Me Dance, Unferth is now back with her latest creation, Barn 8 — a witty yet philosophical political drama, which has been praised, saying, “If this novel isn’t a movement, it has enough heart to start one.”

Audiobooks.com: What can readers gain from listening to the audiobook version of Barn 8 that they might not necessarily get from reading the print version?

Deb Olin Unferth: I love audiobooks. I listen to about thirty a year. I’ve been listening to them since you had to check them out of the library in a big box of numbered cassette tapes and lug them home on the train.

Brittany Pressley, who reads Barn 8, has so much personality in her voice. She’s so playful and has a terrific range. Barn 8 is told from several points of view and she switches between them with ease, making them come to life. It’s almost like listening to a radio drama.

Audiobooks.com: How involved were you in the narrator casting process and what do you look for in an audiobook narrator?

Deb Olin Unferth: I was given several options to choose from. I wanted someone who would bring a lot of energy and be able to handle the different points of view, [and] see it as a fun artistic challenge. Pressley jumped out right away, and she has an impressive list of books to her credit, too. A lot of range.

Generally what I look for in an audiobook narrator varies. For memoir, I prefer the author read it. I want to feel like I’m spending the afternoon with them over coffee and they’re confiding in me. I listened to Michelle Obama read her book, Becoming, and I swear I felt like she and I were hanging out, talking about the old days in Chicago, laughing about the antics in the White House, raging about politics, discussing exercise routines. It made me so happy!

For novels I prefer a professional reader who isn’t afraid to take someone else’s words and bring it to life with their own personal take. Most authors aren’t great at reading their own work, I’ve found, though there are exceptions. Nicholson Baker is an amazing reader of his own work. I could listen to him read his own books forever.

Audiobooks.com: Your novel touches on some very important but seldom talked about issues surrounding egg farming. What was your impetus for writing Barn 8?

Deb Olin Unferth: Well, no one likes factory farming! No one wants chickens to live squashed in cages in giant barns. But it’s hard to think about, hard to face. As I learned about egg-layer chickens and the conditions they live in, I kept having this image of them all leaving the barns. It was such a relief just to imagine it. I decided to go ahead and make that feeling real, on the page.

Audiobooks.com: What research did you have to do for Barn 8 so that you could portray the hen’s perspectives as well as predict what might happen to them in the future?

Deb Olin Unferth: I did a huge amount of research for Barn 8! I wrote a long investigative piece on the egg industry for Harper’s Magazine. I interviewed undercover investigators, farmers, animal lawyers, all sorts of people.

And I spent a huge amount of time reading books and articles about chickens, visiting them on farms, big and small. I sat in hen houses and just watched them. I recorded their voices and listened to them on my headphones at night. This went on for years. I remember one night on vacation, sitting on the beach and contemplating all that I had learned and all that was still unknown to anyone about chickens. The image of them far into the future came to me.

Audiobooks.com: Do you find it hard to toe the line between conveying such a serious message while also injecting your sense of humor and lightheartedness into the novel?

Deb Olin Unferth: Yes, I did. I had to keep taking out material that was too dark, and then putting it back in when I could couch it in enough humor or other kinds of emotion. I do feel like I see the world both darkly and lightheartedly at once anyway. It was a matter of getting the audience to follow along with me.

Audiobooks.com: Can you share with us what you’re working on next?

Deb Olin Unferth: Sure! I’m working on a sort-of sci-fi novel. Part of it takes place on Mars, part of it is on Earth at the end of civilization. Are there animals in it? Yes, there are! Is it funny? You bet.∎