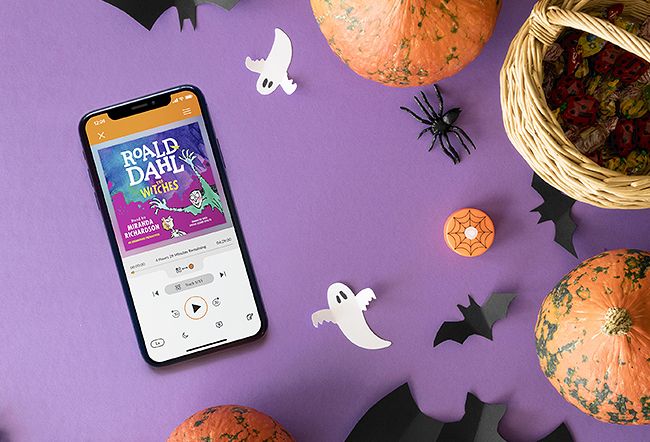 Brace yourselves, bookworms, Halloween is going to be extra scary this year, and not just because of COVID-19 and the imminent end of the world. If you’re the type who likes to hunker down with a pile of blankets and binge-watch nothing but horror flicks in October, then you’re in luck because there’s a slew of terrifying adaptations to dive into this fall. From a classic nightmarish Stephen King tale to new takes on old scares, there are plenty of options for those looking to get their horror fix.

The Outsider by Stephen King, narrated by Will Patton

It’s just not a proper, spooky October if you don’t watch at least one Stephen King adaptation. Luckily, the latest adaptation of King’s bestseller The Outsider is as creepy as they come. Set in the fictional Flint City, Oklahoma, The Outsider is a classic King horror-thriller that begins with the rape and murder of an 11-year-old boy. The miniseries stars Jason Bateman as Terry Maitland, the once-beloved baseball coach accused of the crime, and Ben Mendelsohn as Ralph Anderson, the lead detective on the case, along with Cynthia Erivo and Bill Camp. Whether you already binged the series when it released back in January, or you’re just getting around to it now, October is the perfect time to dive into this nightmarish tale.

September brought the chills with the release of I’m Thinking of Ending Things. Adapted from Iain Reid’s award-winning novel of the same name, I’m Thinking of Ending Things is one heck of a psychological thriller about a man and his girlfriend who are on their way to visit his parents at a secluded farm. The adaptation features horror fan favorites Jesse Plemons as Jake and Toni Colette as Jake’s mother, with Jessie Buckley starring as “The Young Woman,” who is Jake’s girlfriend, and David Thewlis as Jake’s father.

The Devil All the Time by Donald Ray Pollock, narrated by Mark Bramhall

The Turn of the Screw (adapted as The Haunting of Bly Manor) by Henry James, narrated by Jefferson Mays, Bianca Amato

2020 will see not one but two adaptations of Henry James’s novella, The Turn of the Screw. The first, which released earlier in the year, was a modern take on the 1898 ghost story. The second adaptation will be led by The Haunting of Hill House creator Mike Flanagan and follows on the heels of the highly successful 2018 horror series. The second season, adapted as The Haunting of Bly Manor, follows a governess who, while caring for two orphans in the remote English countryside, begins to experience strange phenomenons. Among the returning cast is Victoria Pedretti, who’s swapping the role of the ill-fated Nell Crain for Dani Clayton, the American governess tasked with looking after the children.

2020 will see us all going to Manderley again with a new adaptation of Daphne du Maurier‘s 1938 gothic thriller, Rebecca, this time with Lily James taking on the role of Mrs. de Winter and Armie Hammer as her aristocratic, brooding husband, Maxim. The adaptation follows the pair of newlyweds as they begin their new life together at Maxim’s massive country estate. It is only when they arrive that Mrs. de Winter realizes how large a shadow his late wife will cast over their lives—presenting her with a lingering evil that threatens to destroy their marriage from beyond the grave.

The Witches by Roald Dahl, narrated by Miranda Richardson

An all-new adaptation of Roald Dahl’s The Witches, the book that’s been fueling every kid’s nightmares since its release in 1983, is set to premiere on HBO Max just in time for Halloween. The Witches follows 7-year-old Luke who stumbles upon a secret coven of child-hating witches, whose plans he must put a stop to with the help of his grandmother. Anne Hathaway leads the adaptation as the evil Grand High Witch, with Octavia Spencer as Luke’s grandmother, and newcomer Jahzir Kadeem Bruno as Luke.

Death on the Nile by Agatha Christie, narrated by Kenneth Branagh

Hercule Poirot is back and his mustache is bigger and better than ever! This time, viewers are being whisked to Egypt where Poirot is being pulled into a murder investigation while he’s vacationing aboard a luxury cruise ship. The adaptation will see Kenneth Branagh reprising his role as the Belgian detective along with a star-studded cast featuring Gal Gadot, Armie Hammer, Letitia Wright, Emma Mackey, Annette Bening, Sophie Okonedo, Russell Brand, Rose Leslie, and Ali Fazal.