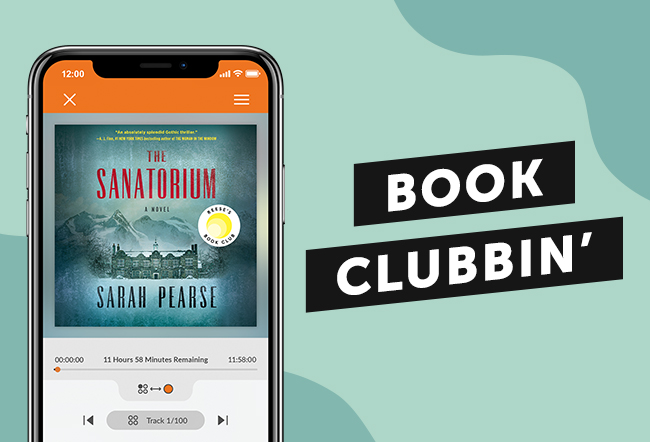 It’s time for our monthly Book Clubbin’ blog feature! This snowy February, we’re ramping up the chill with a gothic locked-room mystery set in the Swiss Alps. Grab your cozy blankets and get ready to dive into an immersive story that will transport you to an isolated getaway. Lockdowns and social distancing don’t mean you can’t start up a book club with your pals. Just book an hour (or more if the discussion gets heated) to meet every month through video chat!

This month, our pick is The Sanatorium by Sarah Pearse, narrated by Elizabeth Knowelden. The Sanatorium is Pearse’s debut novel, and it’s already getting a ton of buzz as Reese Witherspoon’s February book club pick.

Half-hidden by forests and overshadowed by threatening peaks, Le Sommet has always been a sinister place. Renovated from a sanatorium into a five-star minimalist hotel, Le Sommet is where detective Elin Warner reluctantly finds herself to celebrate Isaac’s, her long-estranged brother, engagement. The imposing, isolated getaway spot immediately puts her on edge. When the party wakes up one morning to find Laure, Isaac’s fiancée, has disappeared amidst the arrival of a snowstorm that cut off all access to the hotel, Elin must find her before something worse happens.

This month’s pick is a sinister, atmospheric listen that will keep you up all night. If you’re ready to start discussing The Sanatorium with your book club, dive into the questions below. Beware— SPOILERS ahead.

1) Le Sommet has a sinister past. Nestled in the Swiss Alps and long plagued by rumors, the abandoned sanatorium has been renovated into a luxury hotel. Do you think you would ever stay in a hotel like Le Sommet that was converted from a building with a dark past?

2) During the course of the story, a snowstorm cuts off access to and from the hotel. Why do you think Pearse chose to keep her characters in an enclosed environment?

3) The Sanatorium draws on elements of gothic horror, a genre in which the setting is an integral part of the story. Discuss how Le Sommet, the luxurious yet unsettling hotel, is almost a character unto itself.

4) At the start of the novel, Elin is haunted by a few things in her past: the death of her brother and an investigation gone horribly wrong. Why do you think Pearse made Elin such a vulnerable character? How does she grow as the book progresses?

5) While the majority of the book is focused on Elin, Pearse does bring in different perspectives from time to time. Do you think this added to the story?

6) We eventually learn the sanatorium was a place that abused and exploited vulnerable women. Discuss your thoughts about this. Did it change how you viewed the hotel and the archive room that was planned?

7) Did the ending surprise you? Why or why not?

8) What did you think about the epilogue? If Pearse wrote a sequel, would you be interested?

9) If The Sanatorium was being adapted into a film or tv show, who would you want to be cast?