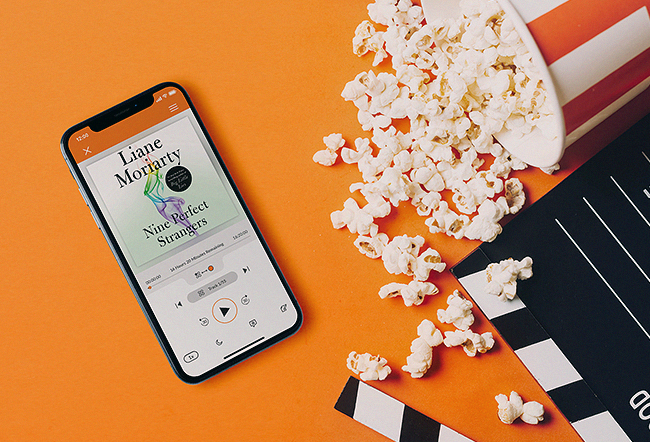 If you’re the type of person who likes to read the book before seeing the movie or TV show, we’ve got great news for you because your to-be-read list is about to get a whole lot longer! 2021 already saw the massive hit that Bridgerton turned out to be, along with Nomadland making its rounds at all the major award shows, Netflix’s Behind Her Eyes sending everyone into a tailspin, and countless other book-to-screen adaptations that have yet to come.

From the long-awaited adaptation of Dune to beloved characters returning to your screens, there will be no shortage of movies and TV shows to bask in as our favorite characters and worlds are brought to life.

Planned releases for the year

Without Remorse by Tom Clancy, narrated by Michael Prichard

What is it about: In a harrowing tour de force, Tom Clancy shows how an ordinary man named John Kelly crossed the lines of justice and morality to become the CIA legend, Mr. Clark. It is an unforgettable journey into the heart of darkness. Without mercy. Without guilt. Without remorse.

The Underground Railroad by Colson Whitehead, narrated by Bahni Turpin

What is it about: Cora is a slave on a cotton plantation in Georgia. Life is hell for all the slaves, but especially bad for Cora; an outcast even among her fellow Africans, she is coming into womanhood—where even greater pain awaits. When Caesar, a recent arrival from Virginia, tells her about the Underground Railroad, they decide to take a terrifying risk and escape.

There You’ll Find Me by Jenny B Jones, narrated by Jeannie Stith

What is it about: Finley Sinclair is not your typical eighteen year old. She’s witty, tough, and driven. With an upcoming interview at the Manhattan music conservatory, Finley needs to compose her audition piece. But her creativity disappeared with the death of her older brother, Will.

She decides to study abroad in Ireland so she can follow Will’s travel journal. It’s the place he felt closest to God, and she’s hopeful being there will help her make peace over losing him. So she agrees to an exchange program and boards the plane.

Release date: May 14 in theaters

Those Who Wish Me Dead by Michael Koryta, narrated by Robert Petkoff

What is it about: When fourteen-year-old Jace Wilson witnesses a brutal murder, he’s plunged into a new life, issued a false identity and hidden in a wilderness skills program for troubled teens. The plan is to get Jace off the grid while police find the two killers. The result is the start of a nightmare.

Release date: May 14 in theaters and HBO Max

What is it about: Panic began as so many things do in Carp, a poor town of twelve thousand people in the middle of nowhere: because it was summer, and there was nothing else to do. Heather never thought she would compete in panic, a legendary game played by graduating seniors. She’d never thought of herself as fearless, the kind of person who would fight to stand out. But when she finds something, and someone, to fight for, she will discover that she is braver than she ever thought.

What is it about: Lisey lost her husband Scott two years ago, after a twenty-five year marriage of profound and sometimes frightening intimacy. Scott was an award-winning, bestselling novelist and a very complicated man. Early in their relationship, before they married, Lisey knew there was a place Scott went—a place that both terrified and healed him, could eat him alive or give him the ideas he needed in order to live. Now it’s Lisey’s turn to face Scott’s demons, to go to that terrifying place known as Boo’ya Moon. What begins as a widow’s effort to sort through the papers of her celebrated husband becomes a nearly fatal journey into the darkness he inhabited.

What is it about: Matt and Liz Logelin were high school sweethearts. After years of long-distance dating, the pair finally settled together in Los Angeles, and they had it all: a perfect marriage, a gorgeous new home, and a baby girl on the way. Liz’s pregnancy was rocky, but they welcomed Madeline, beautiful and healthy, into the world. Just twenty-seven hours later, Liz suffered a pulmonary embolism and died instantly, without ever holding the daughter whose arrival she had so eagerly awaited.

Though confronted with devastating grief and the responsibilities of a new and single father, Matt did not surrender to devastation; he chose to keep moving forward—to make a life for Maddy.

What is it about: ARE YOU A GIFTED CHILD Looking for special opportunities?

When this peculiar ad appears in the newspaper, dozens of children enroll to take a series of mysterious, mind-bending tests. (And you, dear listener, can test your wits right alongside them.) But in the end just four very special children will succeed. Their challenge: to go on a secret mission that only the most intelligent and resourceful children could complete.

What is it about: Set on the desert planet Arrakis, Dune is the story of the boy Paul Atreides, who would become the mysterious man known as Maud’dib. He would avenge the traitorous plot against his noble family—and would bring to fruition humankind’s most ancient and unattainable dream.

What is it about: On March 27, 1995, Maurizio Gucci, heir to the fabulous fashion dynasty, was slain by an unknown gunman as he approached his Milan office. In 1998, his ex-wife Patrizia Reggiani Martinelli—nicknamed ‘The Black Widow’ by the press—was sentenced to 29 years in prison, for arranging his murder.

Did Patrizia murder her ex-husband because his spending was wildly out of control? Did she do it because her glamorous ex was preparing to marry his mistress, Paola Franchi? Or is there a possibility she didn’t do it at all?

What is it about: Young Stan Carlisle is working as a carny, and he wonders how a man could fall so low. There’s no way in hell, he vows, that anything like that will ever happen to him. And since Stan is clever and ambitious and not without a useful streak of ruthlessness, soon enough he’s going places. Onstage he plays the mentalist with a cute bimbo (before long his harried wife), then he graduates to full-blown spiritualist, catering to the needs of the rich and gullible in their well-upholstered homes. It looks like the world is Stan’s for the taking. At least for now.

What is it about: Sophie Whitehouse has a lovely home, two adorable children, and a handsome, successful husband. In other words, she has the “perfect” life. But everything changes the night her husband James comes home and confesses an indiscretion. Suddenly, her neat, ordered world is turned upside down. Did she ever really know the man she married?

What is it about: The legend of Marilyn Monroe—aka Norma Jeane Baker—comes provocatively alive in this powerful tale of Hollywood myth and heartbreaking reality. Marilyn Monroe lives—reborn to tell her untold history; her story of a star created to shine brightest in the Hollywood firmament before her fall to earth.

The Burning Room by Michael Connelly, narrated by Titus Welliver

What is it about: In the LAPD’s Open-Unsolved Unit, not many murder victims die almost a decade after the crime. So when a man succumbs to complications from being shot by a stray bullet nine years earlier, Bosch catches a case in which the body is still fresh, but all other evidence is virtually nonexistent.

What is it about: In this extraordinary work, Beth Macy takes us into the epicenter of a national drama that has unfolded over two decades. From the labs and marketing departments of big pharma to local doctor’s offices; wealthy suburbs to distressed small communities in Central Appalachia; from distant cities to once-idyllic farm towns; the spread of opioid addiction follows a tortuous trajectory that illustrates how this crisis has persisted for so long and become so firmly entrenched.

What is it about: For twelve thousand years the Galactic Empire has ruled supreme. Now it is dying. Only Hari Seldon, creator of the revolutionary science of psychohistory, can see into the future—a dark age of ignorance, barbarism, and warfare that will last thirty thousand years. To preserve knowledge and save humanity, Seldon gathers the best minds in the Empire—both scientists and scholars—and brings them to a bleak planet at the edge of the galaxy to serve as a beacon of hope for future generations. He calls this sanctuary the Foundation.

What is it about: Per Deadline: Eight years after the original website went dark, a new generation of New York private school teens are introduced to the social surveillance of Gossip Girl.

The Last Letter from Your Lover by Jojo Moyes, narrated by Susan Lyons

What is it about: It is 1960. When Jennifer Stirling wakes up in the hospital, she can remember nothing—not the tragic car accident that put her there, not her husband, not even who she is. She feels like a stranger in her own life until she stumbles upon an impassioned letter, signed simply ‘B’, asking her to leave her husband. Years later, in 2003, a journalist named Ellie discovers the same enigmatic letter in a forgotten file in her newspaper’s archives. She becomes obsessed with the story and hopeful that it can resurrect her faltering career.

What is it about: Nine people gather at a remote health resort. Some are here to lose weight, some are here to get a reboot on life, some are here for reasons they can’t even admit to themselves. Amidst all of the luxury and pampering, the mindfulness and meditation, they know these ten days might involve some real work. But none of them could imagine just how challenging the next ten days are going to be.

The Power of the Dog by Thomas Savage, narrated by Annie Proulx, Chad Michael Collins

What is it about: Set in 1920s Montana, this compelling domestic drama tells the story of two brothers—and of the woman and young boy, mother and son, whose arrival on the brothers’ ranch shatters an already tenuous peace. From the novel’s startling first paragraph to its very last word, Thomas Savage’s voice—and the intense passion and cruelty of his characters—holds readers in thrall.

• 17 Most Anticipated Book to Screen Adaptations for 2020

• 7 Terrifying Book to Screen Adaptations of 2020