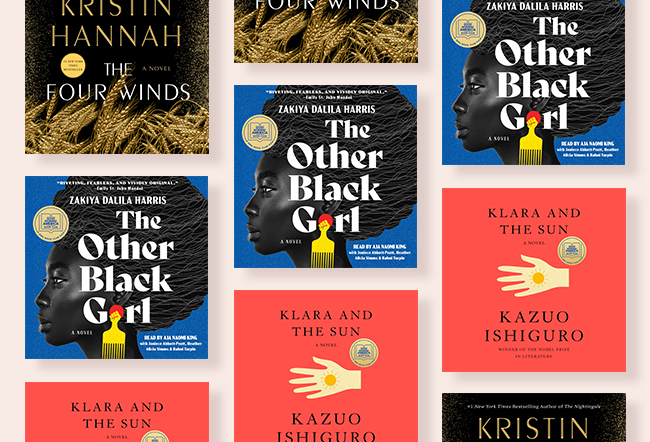 It’s halfway through 2021 and we’ve got no shortage of book recommendations! We’ve rounded up our top 10 favorites of the year so far below, with a whole lot more recommendations in our full booklist. Sit back, relax, and try not to let your to-be-read list get out of control.

The Four Winds by Kristin Hannah, narrated by Julia Whelan

From Kristin Hannah, the #1 New York Times bestselling author of The Nightingale and The Great Alone comes a powerful American epic about love and heroism and hope, set during the Great Depression, a time when the country was in crisis and at war with itself, when millions were out of work and even the land seemed to have turned against them.

Twenty-six-year-old editorial assistant Nella Rogers is tired of being the only Black employee at Wagner Books. Fed up with the isolation and microaggressions, she’s thrilled when Harlem-born and bred Hazel starts working in the cubicle beside hers. They’ve only just started comparing natural hair care regimens, though, when a string of uncomfortable events elevates Hazel to Office Darling, and Nella is left in the dust.

Then the notes begin to appear on Nella’s desk: LEAVE WAGNER. NOW.

Klara and the Sun by Kazuo Ishiguro, narrated by Sura Siu

Malibu: August 1983. It’s the day of Nina Riva’s annual end-of-summer party, and anticipation is at a fever pitch. Everyone wants to be around the famous Rivas: Nina, the talented surfer and supermodel; brothers Jay and Hud, one a championship surfer, the other a renowned photographer; and their adored baby sister, Kit. Together the siblings are a source of fascination in Malibu and the world over—especially as the offspring of the legendary singer Mick Riva.

By midnight the party will be completely out of control. By morning, the Riva mansion will have gone up in flames. But before that first spark in the early hours before dawn, the alcohol will flow, the music will play, and the loves and secrets that shaped this family’s generations will all come rising to the surface.

Beginning in his hometown of New Orleans, Clint Smith leads the reader on an unforgettable tour of monuments and landmarks—those that are honest about the past and those that are not—that offer an intergenerational story of how slavery has been central in shaping our nation’s collective history, and ourselves.

Yearbook by Seth Rogen, narrated by a full cast

A collection of funny personal essays from one of the writers of Superbad and Pineapple Express and one of the producers of The Disaster Artist, Neighbors, and The Boys. (All of these words have been added to help this book show up in people’s searches using the wonders of algorithmic technology. Thanks for bearing with us!) The audiobook cast features more than 80 voices, including cameos by Rogen’s mom and dad, Nick Kroll, Jay Pharoah, Jason Segel, Dan Aykroyd, Ike Barinholtz, Simon Helberg, Tommy Chong, and Billy Idol.

Young Nadia Owusu followed her father, a United Nations official, from Europe to Africa and back again. Just as she and her family settled into a new home, her father would tell them it was time to say their goodbyes. The instability wrought by Nadia’s nomadic childhood was deepened by family secrets and fractures, both lived and inherited. Her Armenian American mother, who abandoned Nadia when she was two, would periodically reappear, only to vanish again. Her father, a Ghanaian, the great hero of her life, died when she was thirteen. After his passing, Nadia’s stepmother weighed her down with a revelation that was either a bombshell secret or a lie, rife with shaming innuendo.

The Last Thing He Told Me by Laura Dave, narrated by Rebecca Lowman

Before Owen Michaels disappears, he smuggles a note to his beloved wife of one year: Protect her. Despite her confusion and fear, Hannah Hall knows exactly to whom the note refers—Owen’s sixteen-year-old daughter, Bailey. Bailey, who lost her mother tragically as a child. Bailey, who wants absolutely nothing to do with her new stepmother.

As Hannah’s increasingly desperate calls to Owen go unanswered, as the FBI arrests Owen’s boss, as a US marshal and federal agents arrive at her Sausalito home unannounced, Hannah quickly realizes her husband isn’t who he said he was. And that Bailey just may hold the key to figuring out Owen’s true identity—and why he really disappeared.