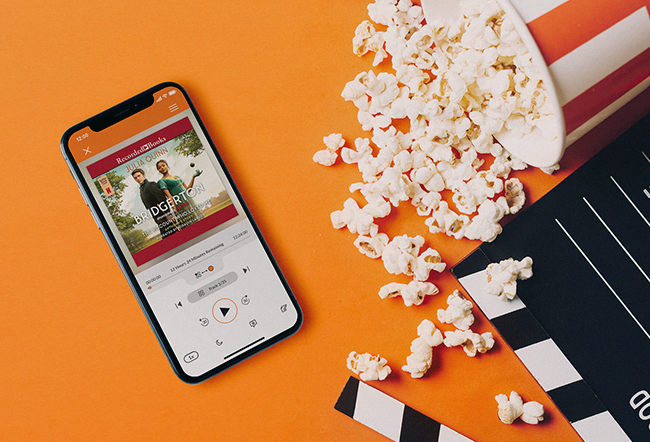 If you’re the type of person who likes to read the book before seeing the movie or TV show, we’ve got great news for you because your to-be-read list is about to get a whole lot longer! Netflix has been releasing book adaptations left and right, with Pieces of Her and Stay Close hitting it big with the thriller crowd. The Oscars also enjoyed its fair share of adaptations, all of which you can discover in our roundup.

With even more to come later in the year, from the much-anticipated season two of Bridgerton to Amazon’s The Lord of the Rings: The Rings of Power, there will be no shortage of movies and TV shows to bask in as our favorite characters and worlds are brought to life.

Planned releases for the year

The Viscount Who Loved Me by Julia Quinn, narrated by Rosalyn Landor

What is it about: 1814 promises to be another eventful season, but not, This Author believes, for Anthony Bridgerton, London’s most elusive bachelor, who has shown no indication that he plans to marry. And in all truth, why should he? When it comes to playing the consummate rake, nobody does it better…

What is it about: In the early 1900s, teenaged Sunja, the adored daughter of a crippled fisherman, falls for a wealthy stranger at the seashore near her home in Korea. He promises her the world, but when she discovers she is pregnant⁠—and that her lover is married⁠—she refuses to be bought. Instead, she accepts an offer of marriage from a gentle, sickly minister passing through on his way to Japan. But her decision to abandon her home, and to reject her son’s powerful father, sets off a dramatic saga that will echo down through the generations.

What is it about: Sophie Whitehouse has a lovely home, two adorable children, and a handsome, successful husband. In other words, she has the “perfect” life. But everything changes the night her husband James comes home and confesses an indiscretion. Suddenly, her neat, ordered world is turned upside down. Did she ever really know the man she married?

What is it about: Harper Curtis is a killer who stepped out of the past. Kirby Mazrachi is the girl who was never meant to have a future. Kirby is the last shining girl, one of the bright young women, burning with potential, whose lives Harper is destined to snuff out after he stumbles on a House in Depression-era Chicago that opens on to other times.

Conversations with Friends by Sally Rooney, narrated by Aoife McMahon

What is it about: Frances is a cool-headed and darkly observant young woman, vaguely pursuing a career in writing while studying in Dublin. Her best friend and comrade-in-arms is the beautiful and endlessly self-possessed Bobbi. At a local poetry performance one night, Frances and Bobbi catch the eye of Melissa, a well-known photographer, and the girls are then gradually drawn into Melissa’s world.

Release date: May on Hulu, BBC Three, BBC One

Where the Crawdads Sing by Delia Owens, narrated by Cassandra Campbell

What is it about: For years, rumors of the ‘Marsh Girl’ have haunted Barkley Cove, a quiet town on the North Carolina coast. So in late 1969, when handsome Chase Andrews is found dead, the locals immediately suspect Kya Clark, the so-called Marsh Girl. But Kya is not what they say.

What is it about: Nanao, nicknamed Ladybug-the self-proclaimed “unluckiest assassin in the world”-boards a bullet train from Tokyo to Morioka with one simple task: grab a suitcase and get off at the next stop. Unbeknownst to him, the deadly duo Tangerine and Lemon are also after the very same suitcase-and they are not the only dangerous passengers onboard.

The Fellowship of the Ring by J.R.R. Tolkien, narrated by Andy Serkis (Adapted as The Lord of the Rings: The Rings of Power)

What is it about: This epic drama is set thousands of years before the events of J.R.R. Tolkien’s The Hobbit and The Lord of the Rings, and will take viewers back to an era in which great powers were forged, kingdoms rose to glory and fell to ruin, unlikely heroes were tested, hope hung by the finest of threads, and one of the greatest villains that ever flowed from Tolkien’s pen threatened to cover all the world in darkness.

What is it about: Ben Mears has returned to Jerusalem’s Lot in the hopes that living in an old mansion, long the subject of town lore, will help him cast out his own devils and provide inspiration for his new book. But when two young boys venture into the woods and only one comes out alive, Mears begins to realize that there may be something sinister at work and that his hometown is under siege by forces of darkness far beyond his control.

Killers of the Flower Moon: The Osage Murders and the Birth of the FBI by David Grann, narrated by Will Patton, Ann Marie Lee, and Danny Campbell

What is it about: In the 1920s, the richest people per capita in the world were members of the Osage Indian nation in Oklahoma. After oil was discovered beneath their land, they rode in chauffeured automobiles, built mansions, and sent their children to study in Europe. Then, one by one, the Osage began to be killed off.

Coming Later in the year

What is it about: The legend of Marilyn Monroe—aka Norma Jeane Baker—comes provocatively alive in this powerful tale of Hollywood myth and heartbreaking reality. Marilyn Monroe lives—reborn to tell her untold history; her story of a star created to shine brightest in the Hollywood firmament before her fall to earth.

What is it about: Daisy is a girl coming of age in L.A. in the late sixties, sneaking into clubs on the Sunset Strip, sleeping with rock stars, and dreaming of singing at the Whisky a Go Go. By the time she’s twenty, her voice is getting noticed, and she has the kind of heedless beauty that makes people do crazy things. Also getting noticed is The Six, a band led by the brooding Billy Dunne. Daisy and Billy cross paths when a producer realizes that the key to supercharged success is to put the two together. What happens next will become the stuff of legend.

Fire & Blood: 300 Years Before A Game of Thrones by George R. R. Martin, narrated by Simon Vance (Adapted as House of the Dragon)

What is it about: Centuries before the events of A Game of Thrones, House Targaryen—the only family of dragonlords to survive the Doom of Valyria—took up residence on Dragonstone. Fire & Blood begins their tale with the legendary Aegon the Conqueror, creator of the Iron Throne, and goes on to recount the generations of Targaryens who fought to hold that iconic seat, all the way up to the civil war that nearly tore their dynasty apart.

What is it about: It is in 1950’s Brighton that Marion first catches sight of Tom. He teaches her to swim, gently guiding her through the water in the shadow of the city’s famous pier and Marion is smitten. A few years later near the Brighton Museum, Patrick meets Tom. Patrick is besotted, and opens Tom’s eyes to a glamorous, sophisticated new world of art, travel, and beauty. Tom is their policeman, and in this age it is safer for him to marry Marion and meet Patrick in secret. The two lovers must share him, until one of them breaks and three lives are destroyed.

What is it about: Twenty-seven-year-old Anne Elliot is happily betrothed to a naval officer, Frederick Wentworth, but she precipitously breaks off the engagement when persuaded by her friend Lady Russell that such a match is unworthy. When later Wentworth returns from sea a rich and successful captain, he finds Anne’s family on the brink of financial ruin. All the tension of the novel revolves around one question: Will Anne and Wentworth be reunited in their love?

What is it about: St. Vladimir’s Academy isn’t just any boarding school—it’s a hidden place where vampires are educated in the ways of magic and half-human teens train to protect them. Rose Hathaway is a Dhampir, a bodyguard for her best friend Lissa, a Moroi Vampire Princess. They’ve been on the run, but now they’re being dragged back to St. Vladimir’s—the very place where they’re most in danger…