This month I chose a challenging read titled, Heart of Darkness by Joseph Conrad. 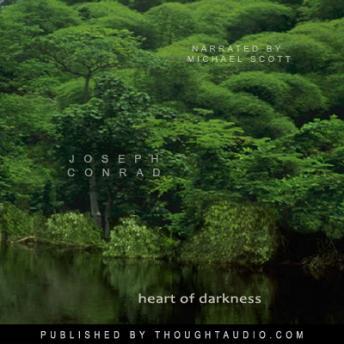 It’s a classic story which takes place in the heart of the Congo and describes the trials and tribulations of the ivory trade. A man is sent on a quest to go and recover another man who is famous in the ivory trade at the time.

It’s an interesting concept for a story, but I struggled mightily to get through it. There were abundant accounts where atrocious abuse of alliteration threw me for quite a loop. Concentration had to be at a maximum because even a small lapse in focus made me miss what felt like an eternity of the story and get completely lost. The author doesn’t clearly explain who people were and at times, figuring out who was speaking was impossible. The vast amounts of dialogue coupled with limited details offering any context around these conversations made following the story often seem hopeless.

The narrator was, in my opinion, very poor.  He read at a very quick pace and his tonality was off.  I felt as if I was listening to a pirate dictate an over-dramatic movie trailer.  Because the story was all over the place and the narrator didn’t do a good job of conveying emotion, I didn’t connect with this audiobook in the same way I have with others in the past.  Associating myself with the protagonist was difficult as he never really went into detail about any of the events or discussed his feelings.

I feel like this novel would be a challenge to get through regardless of whether you listen to it in audio or read it on paper.  It’s a good thing that it’s short because I can guarantee that it will take at least two full read-throughs to get the full gist of the book.

Let me know your thoughts!