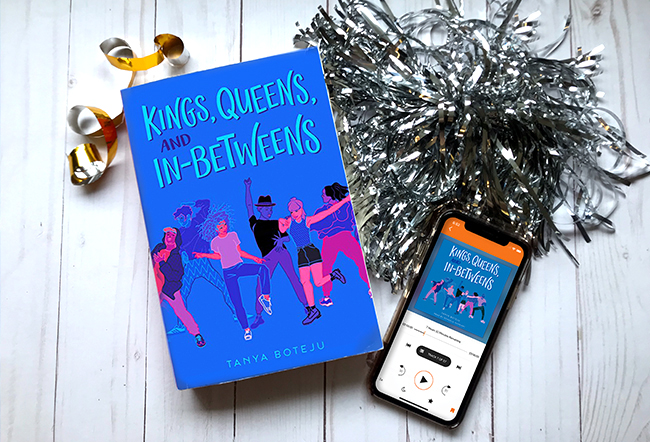 Kings, Queens, and In-Betweens was everything I wanted and more! As most people are, I am way too obsessed with Ru Paul’s Drag Race, so when the description of this book compared it to a mixture of Judy Blume and Ru Paul I was completely sold.

Kings, Queens, and In-Betweens, an #ownvoices novel, is told from the perspective of Nima Kumara-Clark, an awkward teenager who has reached that time in her life where she feels the pressure to discover who she is, who she wants to be, and what she wants to do with her life. Overwhelmed by these big decisions in her small-town, she finds inspiration in the most unlikely place – a drag show.

The main character, Nima, was way too relatable to me with the way she second-guessed everything she did and said, constantly worried about things that may not even happen, and was her own worst critic. These are all feelings that I’m sure most of us felt as awkward teenagers trying to navigate that grey area between being a kid and becoming an adult.

Listening to Soneela Nankani narrate this fabulous story made it so easy to get lost in Nima’s world. Each character was so real and after being introduced, it didn’t take long to visualize a fully-developed, well-rounded person that I was already attached to. I’ll be honest, when I got down to the final few chapters I almost didn’t want to finish them because I didn’t want to say goodbye to Nima and her friends.

The realness of these characters and the story that unfolds likely comes from Boteju’s personal experience with being a queer woman and also delving into the world of drag herself. This allowed her to paint the perfect picture of Nima trying out a new persona (or two) on her path to self discovery.

Giving the spotlight to an array of characters with different sexual and gender identifications, Kings, Queens, and In-Betweens is the perfect listen if you’re in need of a diverse, and heart-warming coming-of-age story.

Judy Blume meets RuPaul’s Drag Race in this funny, feel-good debut novel about a queer teen who navigates questions of identity and self-acceptance while discovering the magical world of drag.

Perpetually awkward Nima Kumara-Clark is bored with her insular community of Bridgeton, in love with her straight girlfriend, and trying to move past her mother’s unexpected departure. After a bewildering encounter at a local festival, Nima finds herself suddenly immersed in the drag scene on the other side of town.

Macho drag kings, magical queens, new love interests, and surprising allies propel Nima both painfully and hilariously closer to a self she never knew she could be—one that can confidently express and accept love. But she’ll have to learn to accept lost love to get there.

From debut author Tanya Boteju comes a poignant, laugh-out-loud tale of acceptance, self-expression, and the colorful worlds that await when we’re brave enough to look.﻿


One thought on “STAFF PICK: Kings, Queens, and In-Betweens, by Tanya Boteju”