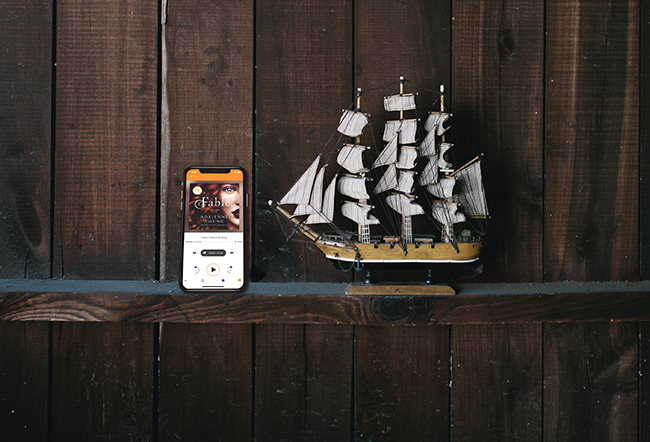 As a millennial who grew up obsessing over The Pirates of the Caribbean (and all the sequels), I’ve always had a fascination with ships, pirates, lost treasure, and the open sea. Jump to the present — I’m all “grown up” and still can’t say no to a good book about an adventure at sea. Enter Fable by Adrienne Young.

Fable follows a spunky, clever, and underestimated teenager aptly named Fable. We meet her a few years after her father abandoned her on an island of thieves just after their family ship had sunk, killing her mother. Fable bargains with West, a local trader, to gain passage to The Narrows on his ship, the Marigold, so she can reunite with her father. It turns out that it’s not as simple as that, since West isn’t exactly who she thought he was.

If you find it hard to get into a book right away, don’t worry, that is not an issue for Fable. This young adult fantasy audiobook immediately pulled me in with the immersive writing and before I knew it I felt as if I were standing aboard the Marigold listening to the crashing waves.

Emma Lysy creates the perfect picture through her narration for how I viewed Fable. She’s matter-of-fact, bold, and determined, which is the exact type of heroine I’d like to look up to as a young adult.

Need I say more? Well, if you need any other reason to pick up this adventurous listen, Fable was selected as the October pick for Reese’s new YA book club! So, there’s bound to be lots of talk about this book over the next while. Plus, it’s a duology, so there’s more to come and I for one can’t wait to hear what’s next for fearless Fable.

Filled with all of the action, emotion, and lyrical writing that brought readers to Sky in the Deep, New York Times bestselling author Adrienne Young returns with Fable, the first audiobook in this new captivating duology.

Welcome to a world made dangerous by the sea and by those who wish to profit from it. Where a young girl must find her place and her family while trying to survive in a world built for men.

As the daughter of the most powerful trader in the Narrows, the sea is the only home seventeen-year-old Fable has ever known. It’s been four years since the night she watched her mother drown during an unforgiving storm. The next day her father abandoned her on a legendary island filled with thieves and little food. To survive she must keep to herself, learn to trust no one and rely on the unique skills her mother taught her. The only thing that keeps her going is the goal of getting off the island, finding her father and demanding her rightful place beside him and his crew. To do so Fable enlists the help of a young trader named West to get her off the island and across the Narrows to her father.

But her father’s rivalries and the dangers of his trading enterprise have only multiplied since she last saw him and Fable soon finds that West isn’t who he seems. Together, they will have to survive more than the treacherous storms that haunt the Narrows if they’re going to stay alive.

Fable takes you on a spectacular journey filled with romance, intrigue and adventure.