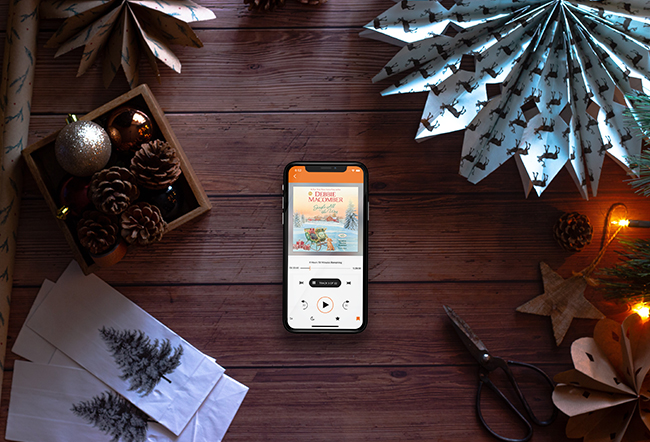 With the holidays comes a trove of new magical Christmas romance movies and even though I, personally, primarily watch horror flicks all year round, even I can’t help but indulge in a couple cozy flicks during the holidays.

If you decided to hop on the Christmas train a little earlier than usual to add a little cheer to a tumultuous year, and have already torn through all the Hallmark and Netflix Christmas movies and you’re still wanting more, we’ve got you!

Check out the audiobooks below for ooey gooey holiday rom-coms that are sure to keep you warm this season. And click here to view our full list of cozy holiday romance listens to really fill up your to-be-listened-to list.

Jingle All the Way by Debbie Macomber, narrated by Thérèse Plummer

Starting out with a bang from the queen of Christmas stories, Debbie Macomber’s Jingle All the Way follows Everly Lancaster who is all work and no play. When her boss insists that she take December off and her vengeful assistant books Everly for a Wifi-free rain forest cruise instead of the beach escape she expected she’s not convinced this vacation will be such a great idea. Everly then meets the naturalist, Asher, who is guiding her along her trip and they grow closer each day, but as the cruise ends will they both be able to take the leap of faith?

In a Holidaze by Christina Lauren, narrated by Patti Murin

If you’re on the lookout for a listen that’s a little different than the classic holiday rom-coms, In a Holidaze is the perfect choice. In this festive audiobook from Christina Lauren we meet Maelyn Jones who is in a bit of rut. She lives at home with her parents, hates her job, and doesn’t have much in the way of romantic prospects. When she goes with her family to their family friends’ cabin in Utah she makes a big mistake and as she’s melting down in the car ride to the airport her and her family are in an accident. When she wakes up, however, she’s on a plane on her way to Utah for the same holiday she just remembered leaving.

Filled with lots of hijinks and the ooey gooey tender moments you’d expect from a holiday rom-com, this listen will check all your boxes this season.

Together by Christmas by Karen Swan, narrated by Anna Rust

A few years after Lee moves to Amsterdam and her life has begun to get on track she finds a book in her bike basket with a message written inside it. She tracks down the owner, Sam, and within an instant they realize they have an undeniable connection. Will Lee’s past put her future in jeopardy? Christmas is a time for being together, but what if the truth means she ends up alone?

Just in time for the series release of Dash & Lily on Netflix comes a new helping of love, but this time across the pond. In this third book in this festive series, Dash gets accepted to Oxford University while Lily stays in New York. When Dash says he won’t be coming home for Christmas, Lily decides she’ll just have to make the trip to London to be with him, but things start to spin out of control. Will London bring them together again — or will it be their undoing?

A Warm Heart in Winter: A Caldwell Christmas by J. R. Ward, narrated by Jim Frangione

How about something a little steamy to keep you warm over the holidays? J.R. Ward’s A Warm Heart in Winter is here to do just that, featuring some of her most iconic Black Dagger Brothers. Everyone’s favorites, Blay and Qhuinn are back and are looking forward to their mating ceremony, but tragedy strikes right before the happy event. Will a warm heart in winter ensure that true love is not lost?

Clare is recently divorced, the family home is sold, and her son is all grown-up, so she decides to move back in with her mom in Little Bramble where she grew up. After dedicating her whole life to her family, she’s looking for something for herself for once and when she finds herself running the village Christmas show, it feels like she has a purpose again. This listen will deliver all the cozy little village and festive vibes, perfect for getting into the holiday spirit.

A California Christmas by Brenda Novak, narrated by Veronica Worthington

Up-and-coming TV anchor, Emery Bliss, is horrified when her ex revenge-posts their sex tape online. To make matters worse, she loses her job because of it. She seeks solace and anonymity in Silver Springs until she’s thrown back into contact with Dallas Turner. Dallas is home for the holiday’s for his adoptive mother’s wedding, but due to his past, he would rather spend his holidays on his own. Emery eventually pulls Dallas out of his shell and sparks begin to fly. Pick up this audiobook, curl up on the couch, and get ready to get swept away to Silver Springs.

A Princess for Christmas by Jenny Holiday, narrated by Charlotte North